for not putting captial letters in your post does not deserve ridicule ..

posted on Apr, 10 2012 @ 05:59 AM
link
Ive noticed some people pick at grammar etc ,also it seems some steep as low as to ridicule you for not putting
a capital letter in your beginning of sentences is this really necessary ?

to me as long as i can read the post then personaly it does not matter as i am more interested in the story
than to pick at things like that,but you do get em. ive had a few people just post for that reason.

reminds me of these people you meet who correct you even though your right on things,
take it all away from you tell you the same thing so that it makes you wrong when you are right.

i dont care about picking things like capital letters commas if i get the jist of it.

have any of you had these experiences, as i am new i would like to hear from long term members, or if you are new and notice this pathetic way of responding to a post then id like to hear.


Shame. In your second sentence you wrote: "things like that,but" As you can clearly see, you left no space between the comma the word but. This breach of the standard writing style of civilized people shall not be overlooked when the great English teacher in the Sky descends to grade her followers on the proper use of the King's English and the importance of spacing.
edit on 10-4-2012 by Aleister because: edit. Word.


Capitalization, for me, isn't as serious an offense as improper spelling of the word. It's when people use the word "loose" instead of "lose", or "their" instead of "they're" that gets me the most irritated. To ME personally, I see it as a sign of laziness or in some cases a lack of intelligence. If you spell a word and it has a red line under it, then chances are it's misspelled. I understand that some people just plain have bad grammar, or English isn't their native language, but I still find myself saying things like, "It's YOU'RE not YOUR, you idiot."
While I am guilty of being annoyed by poor grammar and spelling, I never point it out. It doesn't help anyone, and it just makes you look like a butthole.

If anyone finds some error, which is undoubtedly there, please feel free to point it out.


P.S. I said "in MOST cases" do I see it as a lack of intelligence. I don't think there's a direct correlation between spelling/grammar and intelligence.
edit on 10-4-2012 by Quibbler because: I found an error lol

posted on Apr, 10 2012 @ 07:02 AM
link
People criticize spelling, grammer and other things like that because they can't find a logical argument to your statement. This happens here and elsewhere on the web. It has happened to me as well. If you're producing a logical coherent thought spelling, grammer and punctuation are not that important.

Remember, not everyone on ATS speaks English as their primary language. Frankly, if I had to write posts in Spanish, spelling and grammar errors would be EVERYWHERE.

Also, some people struggle with real problems, such as dyslexia or dysgraphia which can lead to strangely worded sentences.

It is very rare that I can't read a post and understand the author's meaning. Although it does happen, sometimes.

Wouldn't life be grand if everyone had the motto "Play Nice?"

Originally posted by smyleegrl
Remember, not everyone on ATS speaks English as their primary language.


Special English is a controlled version of the English language first used on October 19, 1959, and still presented daily by the United States broadcasting service Voice of America (VOA). World news and other programs are read one-third slower than regular VOA English. Reporters avoid idioms and use a core vocabulary of about 1500 words, plus any terms needed to explain a story. The intended audience is intermediate to advanced learners of English. Transcripts, MP3s, archives and podcasts of programs are provided at voaspecialenglish.com

There is even a version of Wikpedia written in simplifed English. I use it frequently.

When we simplify a language and remove vocabulary, we limit our communication. But for some it can't be helped. It must be better to use easy language than no language at all! Even when it makes me feel stupid.

It's always the little things...like forgetting the word "in"!

I know...junior high is tough...but your going to make it!

posted on Apr, 10 2012 @ 09:19 AM
link
I don't care as long as it's interesting and the OP gets the point across. My only pet peeve on here is the dreaded unending, unbroken, great wall of text! That gives me a headache!

posted on Apr, 10 2012 @ 09:26 AM
link
this is a society of laziness. from the remote control to the 'clapper' to turn your lights on.
on sites like this i dont think grammae is that important (unless you totally cant spell)it the info that should be the point.
now for emails and such i always use the queen's english. thats only proper. dont wanna look like a dupe to someone important!
ignore the grammar police,they just dont have anything important to contribute!

posted on Apr, 10 2012 @ 10:01 AM
link
The use of proper English and punctuation shows courtesy. If one has an opinion and wants others to listen, then the proposition should be stated clearly and formally. Not to use punctuation and capitalization gives me the impression the author is either lazy, uneducated, or young. It may not be true but that is the impression given. Failure to capitalize the beginning of a paragraph is in the same realm as texting. Texting is done mostly by young people. Young people have enough trouble being taken seriously as it is. If you want to be taken seriously, use serious communication. To say it doesn’t matter what you write as long as people know what you are thinking is short sighted. That is like going to a business interview in shorts and a t-shirt because the employer should know you have a suit and tie in the closet at home. I ain’t perfect in my communication either, but I try.

It's always the little things...like forgetting the word "in"!

I know...junior high is tough...but your going to make it!


see. even GEL is far from perfect

posted on Apr, 10 2012 @ 10:58 AM
link
I personally believe good written and spoken communication skills are important in any society that wishes to move forward, and not backward, as a people. The ability to communicate and articulate thoughts and ideas is part and parcel of an advancing civilization.

However, I am not even close to being an expert at spelling and grammar. Nor do I think we need to beat one another over the head for common mistakes. But I do believe we should try to communicate with one another as effectively as we are individually able to.

Being overly zealous stifles communication, and oppresses the free exchange of ideas.
edit on 4/10/2012 by Klassified because: (no reason given)

An APA format has a running head in all capital letters...but the papers title only capitalized the first letters of each word in the title (conditionally)! 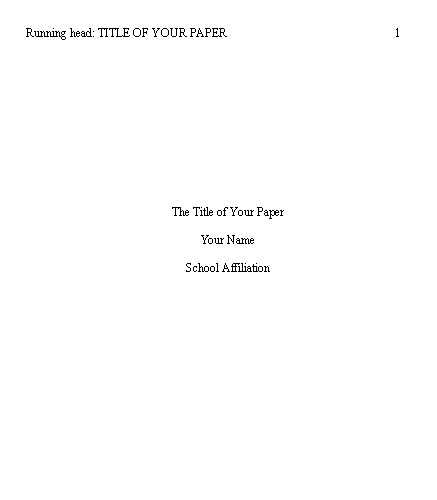 A paper written in MLA format does not have a running head...and is more common in the academic setting.

A MLA essay does still utilize capital letters for the first letter of each word in the title (again conditionally)!

So it is my opinion that the titles for threads on ATS....look more professional done in an APA or MLA format...with the first letters capitalized.

Just my opinion...none of it takes away from the content of an OP's thread...either way!
edit on 10-4-2012 by jerryznv because: (no reason given)

posted on Apr, 10 2012 @ 12:10 PM
link
it is a shame to invalidate an opinion based only on the grammar. as if an idea written with correct grammar has more value than another one with some mistakes. people often forget they're participating in an internet forum and think they're turning on their latest research to the APA.