On the episode itself, I particularly enjoyed them pointing out the blatant paintings of UFOs in the sky.

I seem to remember being shot down in flames when I mentioned these old paintings a while back in a thread. Sooooooo.......they are real and not fakes then?

Extremely happy to see them pointed out like that. When you think they are from the 16th Century, there is no doubt AT ALL in my mind. (not that there ever was:lol


As someone that doesnt have cable, glad to see someone post up the links to these episodes.

Originally posted by Quibbler
reply to post by BiggerPicture

On the episode itself, I particularly enjoyed them pointing out the blatant paintings of UFOs in the sky.


im not psychic, so i wouldnt know if 'every episode' really need a thread,

i'm just following suit with it being a topic in itself - DA VInco who many say is the most important visionary of the 2nd millenium with the 1st visionary in comparison, Jesus Christ the scriptural prophet.

but judging by a few episodes back this season, the Puma Punka episode has some 830 replies, alone.

anyways yeah the virgin mary and child having such a prominent craft-like object huvvering high in the sky and exuding such a bright gleam/radiance is amazing - what is his message - we are not alone? extraterra beings were present/involved in this alleged human parthegenosic delivery?


I haven't got the time to compare to ,some here can't access video where they are so why don't you give us a brief comparison of the videos .
If its that they are repeating themselves in this series then that's no surprise as they'd covered everything by the end of series two . 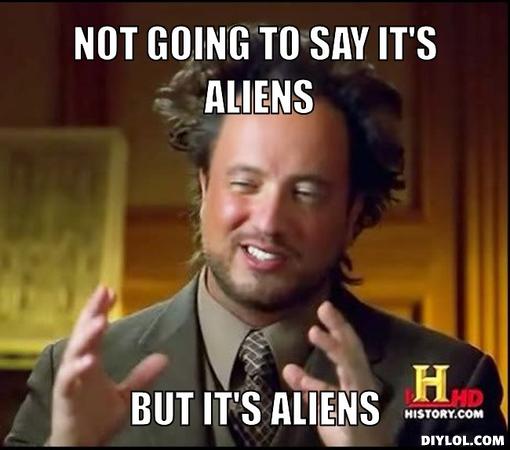 Had to do it

Those pictures are almost as good

That one guys hair "Aliens!"
and that other guy with the way he talks "You can really see on the sooiides... It wooss aliunns."

It's so funny, and It's pretty as anything to look at all the Temples and stuff.

posted on Apr, 9 2012 @ 04:33 AM
link
Da Vinci is our written/eurocentric history's greatest scientifically grounded, enigmatic & cryptic artist that ever lived!

So its great to watch both the Nostradamus Effect & Ancient Alien's new documentary, I just watched them with a week apart or so and they werent redundant!

Please, watch everything you can on Da Vinci! If us ATSers had minds as grand and vast as Da Vinci's imagine how uplifting all we have to share/contribute would be. Absent such a big bar set so hi for other great minds, at least we have all his works and hidden messages to ponder and stretch, expand our minds thru:

This other documentary illustrates even more of his life:


This one look at newer discovered portrait:


the graceful hand gestures - seem SOO chock full of hidden/crytic meaning yet is right there in front of us if we could figure out with help of mirroring, etc. and his 500yo predictive designs of aircraft and awww, weapons we use today - astounding!


Wow, I'm normally one to say "well anything is possible", but honestly this was the biggest load of junk I've seen! I'll give a couple of examples, but there were many! They say Leonardo was known for painting what he saw (as to say that the creepy looking faces were real). So I guess he saw angels too then? I mean, what was he looking at? Stupid! He drew a corkscrew helicopter to show people that he had seen a real helicopter via time travel! Wait, I thought he drew realistic drawings? Why wouldn't he of just drawn an actual heli? Stupid!

If you reverse an image and then lay one over the other you're bound to get shapes due to the 2 images being symmetrical! stupid, stupid, stupid!

Sorry, but I felt like I was losing braincells watching this... I'm in short supply as it is!


If us ATSers had minds as grand and vast as Da Vinci's imagine how uplifting all we have to share/contribute would be.


We do. Every human being of average or better intelligence on this earth has greatness within them. Each one of us can be a Da Vinci, an Einstein, A Tesla, and so on within our own uniqueness.

But only if like them, we think outside of the paradigm of our day. The moment we let consensus tell us it can't be done. We're done.

They were so over the top with that for so long, it started to get annoying.

posted on Apr, 9 2012 @ 08:35 AM
link
I was thinking of posting this episode yesterday but after watching it i couldnt bring myself to post something i thought was utter rubbish. The whole episode boils down to Leonardo cant be tracked for 2 years so he MUST have been abducted and tutored by aliens?!

This has to be the weakest episode yet. The whole series is going downhill more and more each week.

posted on Apr, 9 2012 @ 08:53 AM
link
Thanks for making a thread dedicated to individual shows. It helps keep the conversations inline.

I enjoyed this last ep but think that the stereo-imagery of some of the paintings and the resulting images were a bit of a .....stretch.

posted on Apr, 9 2012 @ 08:55 AM
link
The show started out OK enough, but it has really gone downhill. It seems anything they cannot understand or comprehend has to do with aliens.

A big rock out of place? Aliens or people with alien tech must have put it there because no way on Earth could humans have managed such a thing. A picture with a distorted face? Obviously a picture of an alien they saw. A figure carved out of stone? Must have been trying to depict an alien. Lines in the sand you say? They were trying to contact aliens. Angels in the Bible? Surly you mean aliens with jetpacks.

The show has almost formed a cult. I hear people in the halls talk about it at school like the stuff they show on the show is fact. I am not saying there are not strange things from the past that we have a hard time explaining, but I have seen nothing as of yet this is not possible with enough workers and a little hard work.

posted on Apr, 9 2012 @ 09:04 AM
link
I was not too impressed with this episode. I didn't think the episode was garbage, I just thought it was a stretch...a far stretch at that.

Anyone can take any painting, flip the image and put them both side by side and find hidden pictures.

I was more curious as to why Leonardo, as an apprentice, would finish his Mentor's painting with a different type of paint. But I'm not going to read too much into it. I'm sure he probably just used a non-lead based paint in case he messed up the painting, it would have been easier to fix, instead of it being some kind of grand conspiracy.

Originally posted by Quibbler
reply to post by BiggerPicture

Haha, haven't seen any of the shows but was thinking the same thing.

If the show is presenting something that helps research, cool, but if it's just going to turn into the usual skeptics vs believers battle then it's going to get old pretty quickly.

Had to do it

Hahahah, nice one. Actually if we're allowed at least one of those images in each thread then that's always something I guess.
edit on 9-4-2012 by robhines because: added


Show me 'any painting' you can do this with, and I'll show you otherwise with some of his works. It takes a special kind of artist to purposefully integrate symmetry mechanics into a painting to form a completely different picture when viewed as intended by the creator.

posted on Apr, 9 2012 @ 09:58 AM
link
Ok, I've had it with these shows. Take a history lesson about any give subject, and when there is something that isn't understood very well, ask "Aliens?". I saw absolutely nothing that pointed to aliens in the episode, nothing at all! Sure there was the occasional painting of what might be a spacecraft, but those weren't even done by Davinci!


You can find symmetry in any picture you mirror. How hard of a concept is that to understand?