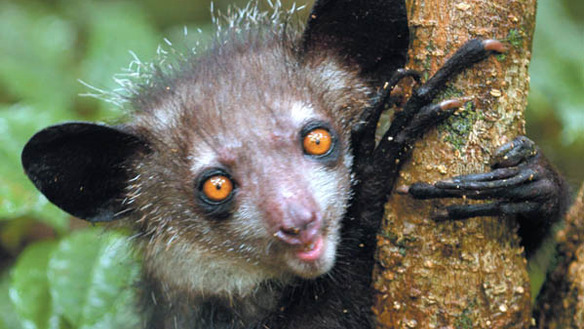 No, the demon primate is not man in this case.
Well I was going to put this in Cryptozoology, but by definition, the existence of this guy is proven. I had never heard of this species, but a bizarre little critter it is. It is called the aye-aye (Daubentonia madagascariensis) and is a lemur. Check out it's fingers!
They are used not only as weapons, but tools to determine the hollow canals within rotting trees. It continually taps the trunk surface, listening for the hollowness to decide where to dig. Again I am amazed at the abilities nature assigns to creatures for specific tasks. Man that is one freaky finger!!!!
Check the vid out to see this thing in action!

But then there’s this: A small primate, known locally as a ‘demon,’ with haunting large eyes. It spends all night in the trees, tap-tapping away at the bark with its hideously shriveled middle finger like a sadistic killer rustling your screen door just before he strikes. According to legend, a single point from that evil finger is enough to strike you dead.

Peace,
spec
edit on 8-4-2012 by speculativeoptimist because: (no reason given)

I adore this type of thread!

OH how I love nature!
He looks like me.

posted on Apr, 8 2012 @ 03:24 PM
link
Yes, specific survival skills in different species can be quite fascinating. All in perfection to the area. XD I remember in AP bio in my senior year, we were looking through this animal book that was lying around and one of my classmates found a picture of that thing and totally freaked out. He just HATED that thing.


Thank you selfharmonise, me too.

Haha, you must be a hit with tha ladies, no?

dont know why it reminds me of howard from big bang theory, but it does. 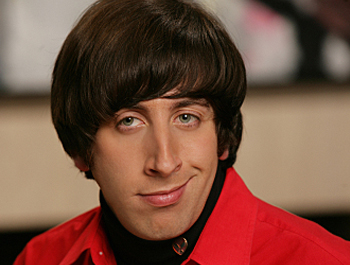 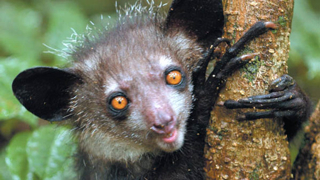 Yea I can see that.

The fact is we are the 'demon primate'. We are pale, hairless, to most animals, they fear us as much as we do large spiders or monstrous cryptids!


Yea, the locals thought sight of it was an omen of evilness. I'd imagine seeing one at night could be a bit unnerving.

I am kind of surprised there are no other creatures with similar anatomy and abilities. That one finger for vibration detection is genuinely unique to these fellas.

The fact is we are the 'demon primate'. We are pale, hairless, to most animals, they fear us as much as we do large spiders or monstrous cryptids!


If the shoe fits, I reckon! At least there are some good primates amongst us too.

You are looking at a handsome red uakari, and he is not blushing, the red uakari always has a face that red. Handsome you say? Why of course, because of his red face. The redder the face, the healthier the red uakari is thought to be. A pale face likely means that a red uakari is sick. The red uakari is also a social butterfly living in troops of up to a hundred individuals, then breaking into smaller groups during the day to look for food. The red face of the red uakari may also help them see each other in the dense forest. Unlike most New World primates, the red uakari has a short tail, but that doesn't stop it from making jumps of 20m+ across the rainforest canopy. Who needs a tail for balance, when you're so sure of your skill!

What a fine specimen! I have never seen one of those, and yea, it could pass for a Hollywood slasher mask face,
but I see the beauty as well.
Thanks for the addition.

spec
edit on 8-4-2012 by speculativeoptimist because: (no reason given)

Her name was Debra. Still can't understand why we split up tho...Oh right, I forgot...


Did she not look the same the next morning or something?
Was she coming after you with that finger?!

spec
edit on 9-4-2012 by speculativeoptimist because: (no reason given)

Originally posted by jude11
I came home home drunk one night night and found one of these in my apartment..

Her name was Debra. Still can't understand why we split up tho...Oh right, I forgot...


I think I still have one of those here.
Beware of the finger!

Thanks for sharing,spec,nice to see nature in all it's natural beauty.