A research group from the Massachusetts Institute of Technology has submitted a report to the Club of Rome.

The scenario is that a massive economic collapse will happen by the year 2030.

This will lead to a massive population decline so they claim.

A graph produced by the study looks like peak oil/energy may be involved as well as peak food, peak services, peak industrial output, and peak pollution may coincide with "peak population". As in "Peak Civilization" ?

The Club of Rome is widely viewed as a consolidated front for Agenda 21.

This report may in fact be parroting that agenda.

Read the entire article from SHTF.com

Researchers at one of the world’s leading think tanks have developed a computing model that predicts serious implications for our way of life as a result of our incessant need to consume resources like oil, food, and fresh water. According to a team of scientists at the Massachusetts Institute of Technology, the breaking point will come no later than 2030, and when it does, we can expect a paradigm shift unlike any we have seen before in human history – one that will not only collapse the economies of the world, but will cause food and energy production to decrease so significantly that it will lead to the deaths of hundreds of millions of people in the process.

Recent research supports the conclusions of a controversial environmental study released 40 years ago: The world is on track for disaster. So says Australian physicist Graham Turner, who revisited perhaps the most groundbreaking academic work of the 1970s, The Limits to Growth.

Written by MIT researchers for an international think tank, the Club of Rome, the study used computers to model several possible future scenarios. The business-as-usual scenario estimated that if human beings continued to consume more than nature was capable of providing, global economic collapse and precipitous population decline could occur by 2030.

Turner compared real-world data from 1970 to 2000 with the business-as-usual scenario. He found the predictions nearly matched the facts. “There is a very clear warning bell being rung here,” he says. “We are not on a sustainable trajectory.”

There is no doubt that the study carries with it its own agenda, as the Club of Rome includes members of the upper echelons of government and business from around the world. Many have suspected that the organization exists as a mechanism to move forward with environmental, and thus social, governance of the world’s resources and population through U.N. initiatives like Agenda 21 and the carbon credit system of taxation, both of which do nothing but shift the wealth of the world into the hands of the elite few at the top of the literal food chain.


Is this a not so "futuristic" view of an "over-corporatized" world where the international corporations control all governments ?

Perhaps some would say that may in fact be true, with the world wide central banking system being nearly completed.

We see financial "bubbles" all the time.
Will we see a civilization "bubble" soon ? 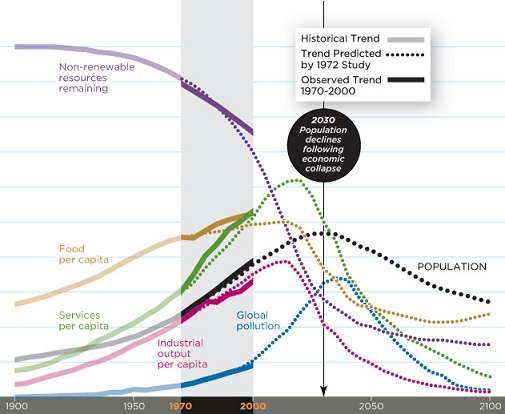 (YouTube Caption)
Agenda 21 explained very well. Including implications it will have on humanity. Opinions within the video come in some cases from those that were in on the negotiations. Truly an interesting watch.

posted on Apr, 7 2012 @ 05:31 PM
link
Two comments: I would love to see the data used for graphing the patterns, and the assumption that there will be no technological or economic progress between now and 2030 is silly.

posted on Apr, 7 2012 @ 05:32 PM
link
They need some good excuses for the artificial global financial collapse.

posted on Apr, 7 2012 @ 06:24 PM
link
I'd be interested to see the data they've used to draw their conclusions from. The world probably could do with a thinning human population. Exploitation of the planet at current rates is not something we can continue forever. As far as humankind knows this is the only planet humans live on/can survive on. We can't screw it up forever, eventually there will come a point where earth will no longer be able to sustain us. Kind of dooming ourselves by our current actions. We completely screw up this planet and we really are f$#%ed.

The current paradigm is man over nature. That paradigm needs to change if we are going to survive as a species.

Personally I don't believe any form of life has more intrinsic value than another, so our choice is simple. Do we want to be Locusts or bees? Do we want to survive by consuming and consuming until there is nothing left or do we want to grow responsibly in a way that respects all forms of life?