How do you make the Easter egg hunt fun at your house?

posted on Apr, 7 2012 @ 02:51 PM
link
With all due respect for religious beliefs around Christianity and passover, I want to state up front that this thread is not meant to address the meaning of Easter nor to detract from that.

Rather, in keeping with the celebratory mood, whether religiously or seasonally motivated, what I want to explore in particular is the Easter egg hunt.

One of my earliest memories when I was little, concerned Easter. At my place it meant I could go outside in my shoes and feel the crunch of sand on the sidewalk as I walked to church with my family. Every step felt magical as I slowly accustomed myself to walking without boots once again. As the crunching sound echoed a little louder against some building fronts we passed, I remember smiling and swinging my arms in excitement.

When we returned home there was a basket of wrapped salt water taffies on the table. There was some chocolate too. However it all paled next to the feeling of the crunching sand and shedding of the winter boots.

By the time I had children of my own, Easter baskets were the norm and egg hunts were becoming the thing to do. My kids of course wanted that too, and like any parent who loves to see the excitement on children's faces, I tried my best.

Did I mention that we had pets? How to hide eggs, jelly beans and wrapped chocolates without the pets getting into them? I was also a single parent, so I could not rely on anyone to do one thing while I did another. Timing was crucial and vital. If I were to have hidden the candy the night before, the animals would have conducted a nighttime raid and left nothing for the little ones, never mind that chocolate and pets do not mix.

I thought about it for a while and when the little ones were in bed, I set about hiding stuff in places the animals would not get into. The toothpaste drawer, peanut butter jar, cutlery drawer were safe places, and I tried to place them in sites I thought would provide a near-even stash for them all.

I set my alarm to put the dog out around six-forty in the morning. Any later and the kids would be up for sure. The cat would be put out at the same time. At that hour though, the dog would merely sniff the air a few times, go to the nearest tree to lift his leg and then bark loudly to come back inside, and his barking would wake the children. There was still snow on the ground so he wasn't apt to lie down and bask in the rising sun just yet. This would give me only a couple of minutes to hide goodies in plain sight and place a basket containing one larger item next to their beds. I planned my run through the house and dropped things here and there, on tables, counter top, chairs and things, behind lamps and well, you know the usual.

The animals were put out and by the time the dog began to bark, I still had some items to hide. Knowing that if he continued to bark, the folks next door would be disturbed, I ran to the door. The children stirred and were soon calling out to each other. I was trapped with a last handful of items to hide. This last handful was the designated evener-stash, the ones that would insure that each got the same amount as the other, or close enough so that they all felt happy about the outcome. I had to let the animals in, so I did the best I could while the kids came running down the stairs. Unbeknownst to me though, a jelly bean -ONE- fell into one of the kids' boots that was by the back door. To this day they tell their friends that I hid things in their shoes and boots. Kids!

So that's my tale. I'd love to read how you plan your hunts, what conspiracy planning goes on between partners/parents -.ATS people love conspiracies. I love to read about any other fun Easter memories you have too.

posted on Apr, 7 2012 @ 03:12 PM
link
While my nest seems to get emptier every year, a few years back I had three teens (far to old for easter egg hunts and stuff) but I also had a young daughter, so everyone got to be involved by default. To make it fun for the older kids, I filled some eggs with candies, and some with quarters raided from my change cup. I also filled some with little notes that said things like "get out of one chore" or "give your sisters one of your sunday chores". I filled a LOT of eggs.

Then, we went outside to the park right next door, toting the eggs and some whiffle ball bats (4, to be exact). The teens had to put their forehead on the bats and spin around quickly until I told them to stop. They spun a lot, I'm mean. When they became very dizzy, they had to rush around to collect the eggs. Same for my little one, but obviously not made to spin much.

This year, its just my little one, so I will probably just do a very traditional "I hide, you find" kind of hunt.

posted on Apr, 7 2012 @ 03:20 PM
link
I celebrate Ostara and not Easter. When we have an egg hunt, I buy the kind that you put stuff in.. I put silver coins, dollar bills, jewelry etc in them. They love it! We have a cook out and give them a basket filled with treats. 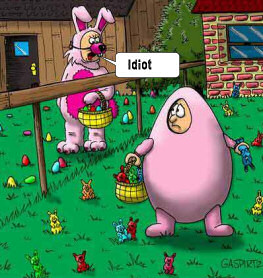 edit on 4/7/12 by ThePublicEnemyNo1 because: (no reason given)

It sounds wonderful! I bet your kids have some really fond memories. I'm not sure I understand what the bat thing was for though?

Filled eggs! I would imagine the kids love it for sure. It's not warm enough for a barbecue where I live yet, but it will be soon.

Just so long as you don't eat the pin first, huh?

Originally posted by aboutface
reply to post by Severin

Just so long as you don't eat the pin first, huh?

While I chuckled when I read that remark, I woke this morn and found this.


Oh my! I can just imagine the parents of the child who found that grenade. Spooky coincidence nonetheless. Will have to keep an eye on Severin's posts just in case he has some kind of powers.

posted on Apr, 8 2012 @ 03:59 PM
link
My littlest one, 10 years old, had a very good time. The town sponsored a hunt, and I took him, with his Walmart bag for collecting eggs. He was not alone with the bag, either. There was no security, only volunteer Firemen parking cars, and all adults were very respectful, they hung back and let the kids have fun, not like I saw on the TV news.
One kid asked him if he knew about Easter, and the little guy told him it was based on Eostar, is the Goddess of dawn and new beginnings, and Fertility, thus with the Rabbits and Eggs. The kid didn't know what to think.
The Goddess Ishtar is also associated with the holiday.
Pagan origins of Easter