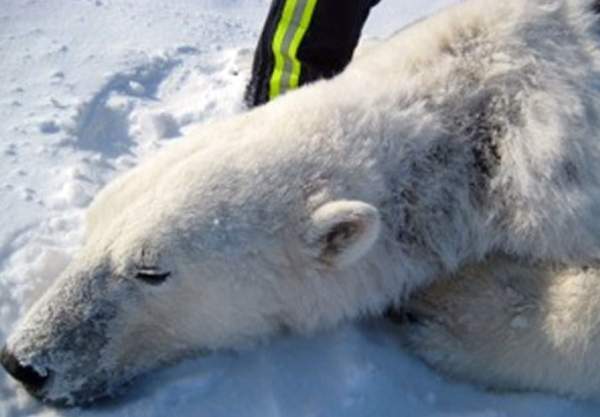 Biologists have found Polar Bears in the Beaufort Sea with hair loss and skin lesions. Those are the same symptoms that have sickened ice seals and walruses in the arctic since last summer and led the federal government to declare the incident an unusual mortality event. Scientists are just beginning an investigation into whether polar bears are suffering from the same thing.

So far, the field scientists have found hair loss on nine of the 33 bears they’ve captured. The bears have skin lesions on their head, neck and ears. Degange says they have found polar bears with similar symptoms since 1999, but the number of effected bears makes this year unusual.


It looks like the radiation is starting to take it's toll. This information must not be disseminated by the MSM however, and something else must be responsible for these strange lesions, perhaps global warming. Yes, global warming sounds like a good explaination.

Keep in mind, polar bears are excellent swimmers, and have been swimming in contaminated water since day 1. They also eat the contaminated seals, and the radiation travels up the food chain exponentially.

There's no mention of radiation poisoning in your source, what has made you come to this conclusion?

The biologists collected blood and tissues from the affected bears to try to figure out if the symptoms are related to the mysterious illness that has been found in ice seals and walruses. Dozens of seals have died from the disease, but no walrus deaths are attributed to it. Scientists don’t know yet if the walrus and seals are suffering from the same thing. Although the veterinary pathologist who has done most of the necropsies on the animals say the lesions look very similar under the microscope.

Do you just make up stuff as you go along?

So far, the field scientists have found hair loss on nine of the 33 bears they’ve captured. The bears have skin lesions on their head, neck and ears. Degange says they have found polar bears with similar symptoms since 1999, but the number of effected bears makes this year unusual.

There is no correlation if it's been happening since 1999, from your own source.

I didn't see a single mention of radiation in the article. Pure speculation on your part without any supporting evidence. Granted, there is more radiation in that region, but who is to say it isn't cosmic radiation or more concentrated radiation from the sun?

~Namaste
edit on 7-4-2012 by SonOfTheLawOfOne because: (no reason given)


We can't say we were not warned.

6 Then the seven angels who had the seven trumpets prepared to sound them.

8 The second angel sounded his trumpet, and something like a huge mountain, all ablaze, was thrown into the sea. A third of the sea turned into blood, 9 a third of the living creatures in the sea died, and a third of the ships were destroyed.

10 The third angel sounded his trumpet, and a great star, blazing like a torch, fell from the sky on a third of the rivers and on the springs of water— 11 the name of the star is Wormwood.[a] A third of the waters turned bitter, and many people died from the waters that had become bitter.

13 As I watched, I heard an eagle that was flying in midair call out in a loud voice: “Woe! Woe! Woe to the inhabitants of the earth, because of the trumpet blasts about to be sounded by the other three angels!”

In Genesis, God told us not to reach for the fruit of knowledge (Technology) or we would eventually die as a species. Then, John told us that the mark of mankind and our technology would be 666. Carbon has 6 protons, 6 electrons and 6 neutrons. We were warned 2000 years ago to be on the lookout for the men that would use the fruit of knowledge to control our money, commerce and the people themselves.

If you want to define Carbon Trading, just call it what it is. Human unit trading. Europe will soon bring this system of investment to the entire world. We called it cap and trade. When the financial system collapses, watch for it. Carbon will be the center of the new system, backed by UNESCO and the Biosphere Reserve System of the UN.

The animals are our warning that we have gone too far. Judgment is coming.

22 “If those days had not been cut short, no one would survive, but for the sake of the elect those days will be shortened. 23 At that time if anyone says to you, ‘Look, here is the Messiah!’ or, ‘There he is!’ do not believe it. 24 For false messiahs and false prophets will appear and perform great signs and wonders to deceive, if possible, even the elect. 25 See, I have told you ahead of time.

The next step from the NWO will be the presentation of a peace plan that will save the planet, economy and unite the world under a false unity. 3.5 years later, sudden destruction.

Originally posted by dmac359
I'm kind of new to the site so bear with me here.. Why do people flag a topic that is obviously misleading? Do people even read these articles or just the headline?
edit on 03/28/2012 by dmac359 because: (no reason given)

You can un-flag a topic too... people should only flag something that they think deserves more attention and should get raised to the front page or the top of the topic lists.

This is a bad example... I didn't flag it, and I don't think anyone else should either, but some people just see a headline and give out a flag as if it were a star.


We can't say we were not warned.

10 The third angel sounded his trumpet, and a great star, blazing like a torch, fell from the sky on a third of the rivers and on the springs of water— 11 the name of the star is Wormwood.[a] A third of the waters turned bitter, and many people died from the waters that had become bitter.

I seem to remember reading somewhere that Wormwood translates to Chernobyl in Russian, something to do with the plant species. Ahhh, found a reference (just quoted though, you can look it up using chernobyl and wormwood on your search engine);

"Yes. Chernobyl is a Ukrainian name for mugwort which is a species of artemesia (known as common wormwood)."

posted on Apr, 7 2012 @ 11:59 AM
link
While some of these afflictions mimic radiation poisoning, we can't absolutely conclude that is the case.
Perhaps this is mange, etc? It's a bit premature to jump to the Fukushima event as the cause of this. I'm not saying it isn't, but let's at least try to rule out a few more common afflictions first please. To do otherwise is being ignorant.

posted on Apr, 7 2012 @ 12:02 PM
link
I had no idea there has been an ongoing multi-species disease in arctic animals, this is really very eye-opening. Let's hope it doesn't aim to include humans someday as well.

And shame on you OP, there is no need to make an imaginary link to radiation as you did. This disease has been ongoing for 13 years. Thirteen. This has been going on far longer than JUST since Fukushima. If it was related to radiation at all, don't you think this would have been ongoing since Chernobyl in 1986? Even then, it's doubtful, these disease effects showed up 13 years after THAT event.

Just because you think the shoe fits with the mother of all shoehorns & herculean strength doesn't mean the shoe actually fits in reality.

were they tested for corexit by any chance?

posted on Apr, 7 2012 @ 01:48 PM
link
Could this have anything to do with radiation getting through the hole in the Ozone layer that is known to exist above the Arctic?

If so, it's probably an early warning sign of what might happen to humans as that hole expands across Northern areas.

Originally posted by Marrr
While some of these afflictions mimic radiation poisoning, we can't absolutely conclude that is the case.
Perhaps this is mange, etc? It's a bit premature to jump to the Fukushima event as the cause of this. I'm not saying it isn't, but let's at least try to rule out a few more common afflictions first please. To do otherwise is being ignorant.

Surely, radiation levels would be outstanding in those areas if the bears and seals were being effected. More than likely, also not mentioned anywhere I've seen up to now on this thread, is that bears dine of seals. If the seals have some contagious disease, even if relatively minor, there is a good chance that the bears would acquire it.

And if it is assumed that the radiation is coming from Japan, why is this problem not found there among the people in the major effected areas? On the other hand mange is quite common and very contagious among animals. so it is a far leap to jump to radiation sickness given the high incidence in the bears.

posted on Apr, 7 2012 @ 04:10 PM
link
This truly breaks my heart.
I've LOVED polar bears, since I was a kid. they don't deserve this. they're magnificent creatures.


Ya regardless of the reason these animals are suffering, albeit radiation, corexit, pollution etc.. It sucks. There's millions of human suffering from all sorts of things and the general population could give a rats behind. Don't get me wrong it breaks my heart too, it just sucks with all the resources and advancement, humans (and animals) are not better off.

posted on Apr, 8 2012 @ 12:46 AM
link
What else is causing this, if not radiation sickness? It fits the classic signs, and wildlife is almost never discovered in this condition.