5 April 2012
As ESA’s Envisat satellite marks ten years in orbit, it continues to observe the rapid retreat of one of Antarctica’s ice shelves due to climate warming.

One of the satellite’s first observations following its launch on 1 March 2002 was of break-up of a main section of the Larsen B ice shelf in Antarctica – when 3200 sq km of ice disintegrated within a few days due to mechanical instabilities of the ice masses triggered by climate warming.

Now, with ten years of observations using its Advanced Synthetic Aperture Radar (ASAR), Envisat has mapped an additional loss in Larsen B’s area of 1790 sq km over the past decade.


Hi-resolution photos and diagrams can be downloaded on the link below.

This animation shows radar images from the Envisat satellite from 2002 to 2012 of the Larsen B ice shelf in Antarctica. Over the last decade, the ice shelf has disintegrated by 1790 sq km. 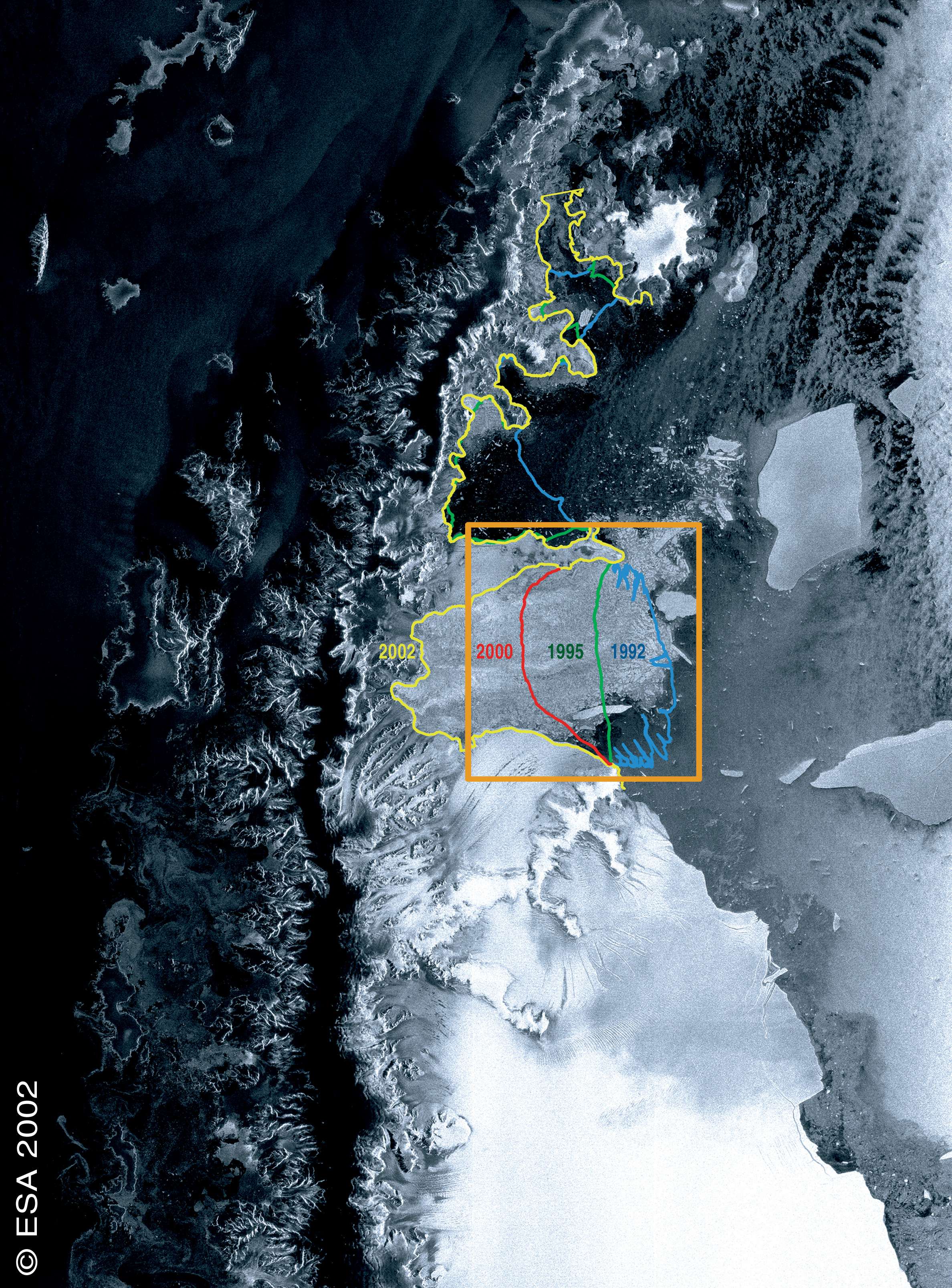 This image of the Larsen B ice shelf is one of the first photos taken by Envisat on 18 March 2002. Prior to Envisat’s launch, ERS-1 and -2 had been monitoring changes in the region. Together with ERS data, this image (orbit 250) documents the 100-km retreat of the Larsen B ice shelf. Today, Envisat's radar continues to make regular, all-weather observations to enable detailed studies of the extent, surface motion and surface melt of all the ice shelves around Antarctica.


“The northern Antarctic Peninsula has been subject to atmospheric warming of about 2.5°C over the last 50 years – a much stronger warming trend than on global average, causing retreat and disintegration of ice shelves.”


“Climate models are predicting drastic warming for high latitudes. The Envisat observations of the Larsen Ice Shelf confirm the vulnerability of ice shelves to climatic warming and demonstrate the importance of ice shelves for the stability of glaciers upstream.


Ice shelves are sensitive to atmospheric warming and to changes in ocean currents and temperatures,” said Prof. Helmut Rott from the University of Innsbruck.


I just find it rather odd you made a thread like this and left out the cause of the problem.

Originally posted by Atzil321
Is there a reason you omit key points from your link? Such as this..


“The northern Antarctic Peninsula has been subject to atmospheric warming of about 2.5°C over the last 50 years – a much stronger warming trend than on global average, causing retreat and disintegration of ice shelves.”


“Climate models are predicting drastic warming for high latitudes. The Envisat observations of the Larsen Ice Shelf confirm the vulnerability of ice shelves to climatic warming and demonstrate the importance of ice shelves for the stability of glaciers upstream.


Ice shelves are sensitive to atmospheric warming and to changes in ocean currents and temperatures,” said Prof. Helmut Rott from the University of Innsbruck.


I just find it rather odd you made a thread like this and left out the cause of the problem.

I liked your avatar pic so much that I had to complement you on it.


Have you guys been out today? I have never felt any thing like it. Its only 87f yet it fells like 100f when standing in the rays. I was standing out side in the sun for 5min and now i fell a drowsy energy drain. Def getting hotter.

posted on Apr, 5 2012 @ 03:45 PM
link
Yep, can expect melting since coming out of an ice age still.
I remember in '90's they said It would all be melted by now. Nope
Ocean would be 20 ft higher by now and Florida would be under water. Nope
Ya know that in the 70's they told us to paint our roofs black because we were entering another ice age. Nope.
Then just 15 years later said we were all going to die soon because of warming caused by co2. Their proposal to fix the warming, pay a co2 tax. Everyone will be allowed to pollute as much as they want as long as they pay lots of taxes. What?
My prediction, there will be melting and then another ice age. That's what the earth does. Cycles. Duh.

posted on Apr, 5 2012 @ 03:49 PM
link
Data has shown that Ice shelves expand and retreat over time. This has happened over and over again over millions and millions of years. Real science has proven it.The planet has had ice ages and warming periods for eon's. During the 13th and 14th century the earth was a lot warmer than it is now.
So are you implying that this is a effect that is being caused by man? Even though the ice cap's on Mar's are also showing rapid retreat as well? Are we causing that to happen? So let's see maybe if we all pay Al Gore more carbon taxes then he will somehow magically make the ice shelves expand back to their previous positions from ten years ago? I don't know what the motive for your thread is , but if it's to continue to try and convince people that we all need to stop breathing to save the planet while Al Gore and the elite create more of a carbon footprint on a daily basis than all the member's of ATS combined , I'm not biting. Have we all forgotten the climate gate scandal where it was proven that bought and paid so called scientists where caught faking data to continue backing this cult movement.? As well as the fact the planet hasn't really warmed up as a whole over the last fifteen years?
Don't get me wrong I love this planet as much as the next person and I do believe that man has had "some" effect
regionally regarding climate change such as rapid deforestation, but as a whole I believe the sun has had more of an affect on climate change than we ever have.
According to a certain social economic professor, comments like mine make me "mentally ill" and I need to be treated for my condition.
What I fear more than retreating ice caps is people like this. This will be the downfall of humanity in the end, eugenic fascists that would rather see us all dead than ever admit they were wrong. First they said it was global warming, now that they know they were wrong they just changed the name to climate change which is a lot more vague and easier for them to defend. This whole rediculous new religion is just another huge money making cult movement to further control humanity for their perverse and sickening agenda.
You should worry less about retreating ice caps and worry more about what these people want to do to you and me. I'm not here to try and start a fight with anyone, or deny climate change. I'm just here to state I believe that the cause and the movement are moving into an area of sheer lunacy and are nothing more than a massive deception to further inflict more and more control over everyone and everything. Now to me that's scary.

Thanks for the add, yes I should add these important points to the thread; but the main question IMO should be, like I said "Is this irreversible?".