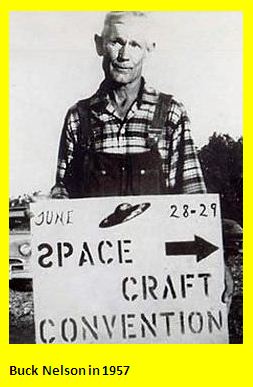 In the mid-50s, UFO fever had become like a hydra with many heads pulling in different directions…and snapping at each other. Same as today really. Scientists swelled the ranks of NICAP (1st board) and discussions were causing hot tempers within the USAF as everyone sought to stick a pin in a ‘flying saucer.’ In many ways, it was the last period of time for UFOs to be seriously wondered about, in public, by society’s intelligentsia.

Not everyone was taking the sober approach...

Others were yelling ‘Hallelujah’ and seeing the visitors as distant cousins to Jesus. Amen y’all! These beautiful blonde-haired, white folk from outer space came with all the secrets of world peace, brotherly love and free rides to the moon and beyond. They bore witness to God and Jesus and only asked for one thing in return…our Trust.

Without exception, our space-truckin’ missionaries left not so much as a page of their bibles or a cure for hay fever. What they did leave was a selection of individuals to testify on their behalf and demand just two things: TRUST…and money. Testify!

Over in the Ozark Mountains, Buck Nelson was one such guy who rode the wave of space-age spiritualism for a decade. He began with a photo in 1954 and had been to Venus, Mars and the Moon by 1957. 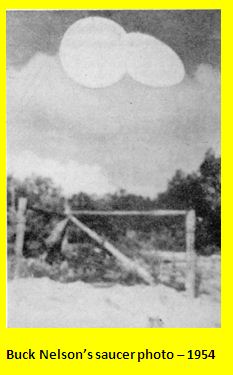 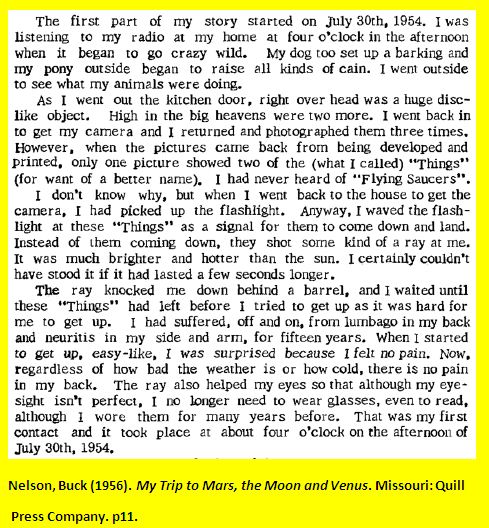 Six months after this, he was visited again and was asked if it was okay for them to land? He said ‘Sure.’ It would be a month later when they came back to land in one of the straight-up, weirdest encounter claims in ufological history, mystery and mythology.

Around midnight, March 5th 1955, Buck was approached by 3 naked men and a ‘400lb’ dog. The captain was called ‘Bob Solomon’ and a younger man was called ‘Young Bucky.’ Before duelling banjos broke the night air, he was also introduced to the enormous dog, ‘Bo,’ which shook his hand. The 3rd man was friendly and offered no name although ‘Billy Bo Bob jnr’ wouldn’t have surprised anyone.

It takes a special sort of guy to spend time with 3 naked men and their half-ton dog. Bob, Buck, Bucky and Bo?!

Before going aboard the spaceship, Buck had to write down the ’12 Laws of God…on Venus.’ 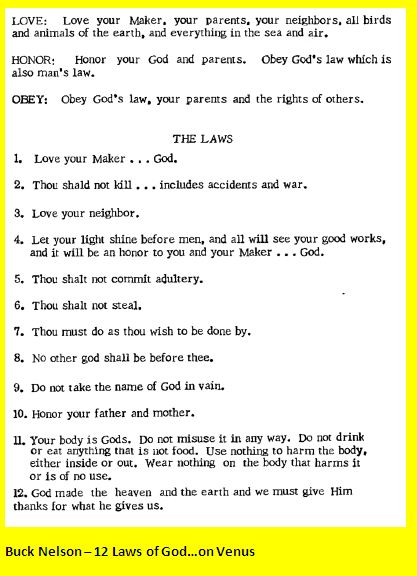 With that done, he was away to Mars where his classic understatement, ‘a good meal’ failed to do justice to the history of the occasion. 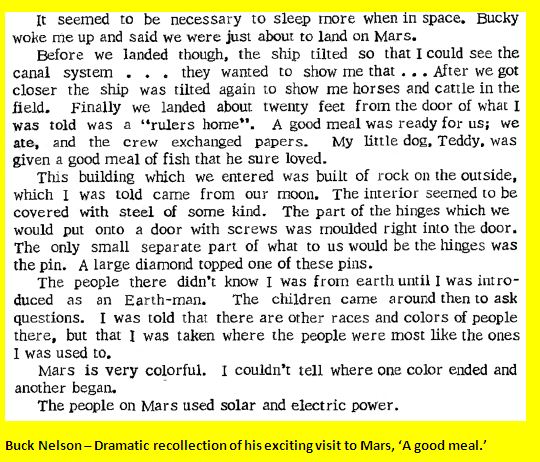 From there he was off to the Moon where he and Bo had a walk around the craters. With barely enough time to eat another meal, they were off to Venus…to eat.

There are more of the same bland descriptions of Venus and those who live there as you can read here and here. Strikingly, Buck describes how everyone he meets wears coveralls. In Buck’s experience, our Solar System is populated only by men wearing bib-coveralls….and big dogs.

Back on Earth, Buck wasted no time letting the people of the Ozark Mountains know all about his adventures and word soon spread. He opened a festival called the ‘Spacecraft Convention’ that ran for 10 years and must have made some useful extra income. At its peak, it was allegedly attended by up to 5000 people. 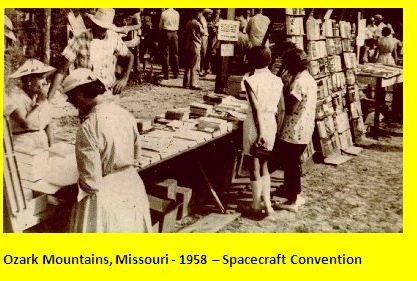 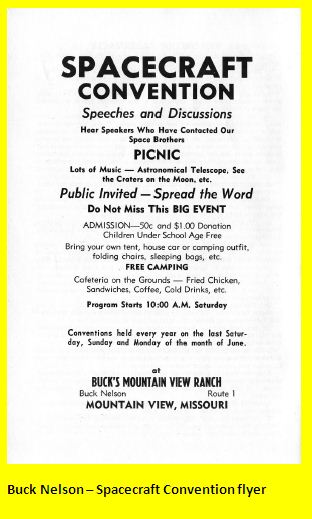 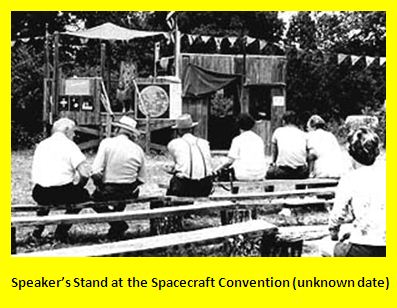 
Reading between the lines of Nelson’s book is like a peek into his inner thoughts. All the benefits he describes on Venus and Mars are the things that would trouble him most on his farm in Missouri. Out in space, they have no taxes, no roads to maintain...they especially don’t have to tidy their own bedrooms. There are no Governments or police to hassle folk and women are not seen and not heard. In his idealistic world, men are God-fearing white-men and get to wear bib-coveralls all the live-long day with no women to bother them. The eating’s good too!

Just as importantly, there was no threat of nuclear energy out in space and Young Bucky made it clear what would happen to America if it didn't abandon the path they were on... 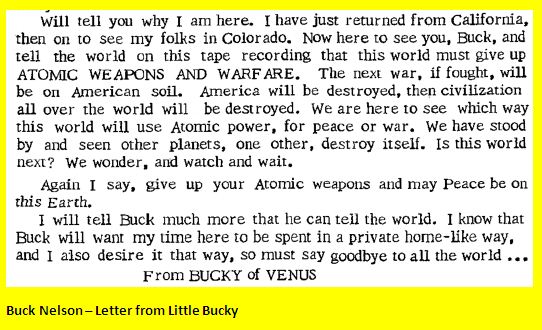 As 1950s America settled in for the Cold War, people were worried about nuclear power and atom bombs. They were torn between Post-War success and the dread of a terrible new war. Some of that paranoid conspiracy thinking was born in those years. For many, they wanted ‘space-visitors’ and God to save them or take them away from it all. So, as the Buck Nelsons told their tales to the believers, they could all dream about white saviours whom they could TRUST. After all, these star-truckin’ Space Brothers already lived in the light of the Lord and could be trusted more than anyone on Earth. Testify! 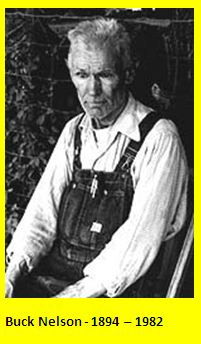 Buck Nelson - My Trip to Mars, the Moon and Venus. (pdf copy)

Flying Saucer Review Vol 1; No2 - Letter from Nelson and the UFO photograph

Ballester-Olmos - The Year in Photos - 1954 Nelson's photo is identified as a double-exposure.


Cool story thanks for sharing. S&F

posted on Apr, 5 2012 @ 10:33 AM
link
I always thought that the Nazis and their Japanese collaborators were the first men on Mars.
Perhaps it were those that invited Buck to their base.

posted on Apr, 5 2012 @ 10:39 AM
link
reply to post by Regenstorm
It wouldn't be the first time the 'space-brothers' have been compared to Nazis.

Nelson's description of the moon bases are pretty recognisable to our modern eyes and the idea had been around for a long time. Of course, some would say that Buck Nelson had a genuine experience and maybe he did?


Old Buck sure sounds like a good old boy , good on him hope he made some $ , he sounds more fun the hucksters were stuck with today


It takes a special sort of guy to spend time with 3 naked men and their half-ton dog.


.... Thanks Kandinsky that brightened up my day .

I've seen that picture of Old Buck holding the sign before but just can't remember where .

posted on Apr, 5 2012 @ 10:44 AM
link
Create civilization on mars, build buildings with Earth's moon's rocks. That screams foul to me. Kinda funny too, oh human imagination. As well, the canal system, oh god Lowell you ass-hat.


I think the George Adamski and the Howard Menger Case both need a thorough investigation.
By the looks of it they had contact with the Nazi UFOs/VRIL and were more or less forced to add lots of male cow manure to discredit themselves. Desmond Leslie, the co-writer from Adamski was a cousin of none other than Winston Churchill.


Mars, moon and Venus - All in a day's work hey? Thanks for sharing that was amusing - Tall tales echoes through the ages - One would like to think that today's tall tale tellers have to rely on more sophisticated methods to earn people's trust - Technology helps. Consider the case of Human birdwings.

posted on Apr, 5 2012 @ 11:17 AM
link
reply to post by gortex
Yeah, he was a sharp character in those later years. It'd be interesting to find out what he was up to in the years before these opportunities arose. Never missing a trick, this is what he added to the back page of the book. 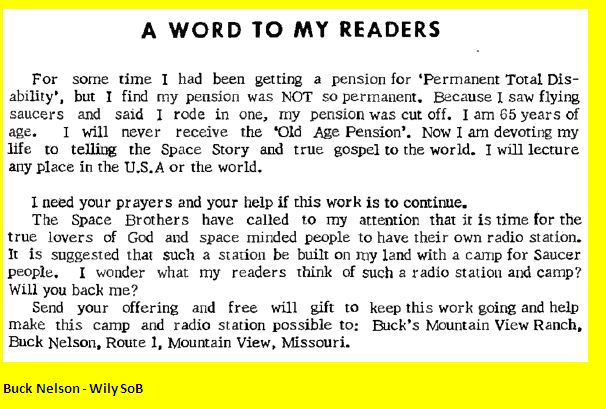 "If you really believed in God and Space Brothers, you'd buy me a damn radio station!!"


Buck Nelson vs Billy Meier; who would win?

I didn't know about buck. this is awesome fun stuff. Testify!

Nice job, but I feel a bit cheated you didn't include any photos of Bo!

Funnily enough, Bo was given to Buck after all his hair began to fall out following a sad incident involving cosmic rays and a fly-by past Venus. For 9 out of 10 of his Spacecraft Conventions, poor bald Bo was laid up in Buck's house with a bad case of shyness. There's no doubt that Bo was a real Venusian spacedog because Buck was selling packets of his hair to anyone with gullibility enthusiasm.

Meier versus Nelson? Who knows, but Meier had a bigger posse.


And I absolutely agree with them
Love the footnote on the " word to my readers " quote .... Wily SoB ...tend to agree with that too

I think Buck Nelson defeated this by creating a niche for himself, leaving a footprint in history and making a few bucks off people who enjoyed his stories.

posted on Apr, 5 2012 @ 03:23 PM
link
What and interesting an amazing story! I had never heard of any of this but so much of it seems familiar and it's important. things that sound funny or ridiculous to us, often just need to be heard in different wording. One thing that caught my attention was the "dog", which reminded me of chewbacca or yetis. there are many stories of hair covered aliens and encounters. (Remember that we are the "naked apes.")
As for the names, he may have just chose the easiest to pronounce or refer to, or maybe they chose the most common for the area of humans they would encounter.
Fascinating info, imo...
S+F!

posted on Apr, 5 2012 @ 03:34 PM
link
reply to post by gemdog
I'm leaning more towards the idea that Buck's imagination only reached so far.

As such, names like Bob, Bucky and Bo would have been known to him. He could have opted for the typical *alien* names of Orthon, Klaatu or K'taa but didn't have the creativity.

On the other hand, he's been described as a hill-billy and a hayseed. This usually implies an uneducated nobody. He wrote a letter to the UFO magazine, Flying Saucer Review, in 1955 that's literate, well structured and indicates a man with an education.


Im agreeing with you. thats what I mean about it may have been the easiest names for him to refer to. In the future, we'll probably be seen as the hayseeds. LoL
I think he was for the most part being truthful.


I am from Missouri, so I am obligated to believe every word of this!

To be honest, it sounds as believable as any other UFO story. Also, since he appears to be a simple Hillbilly, some of his descriptions seem too good to be his own work?

Also, possibly the first well documented UFO crash ever occurred near enough to Buck's homestead! It was in 1941 in Cape Girardeau, MO.

As a fellow Missourian, I commend Buck for his courage to come forward, and I choose to believe his stories as written. A good story beats a boring fact anyday!
edit on 5-4-2012 by getreadyalready because: (no reason given)


Cheers for the laugh K-Dinks


At least he kind of admitted (with the Wiley SOB comment) that he was scamming and making it up.


He wasn't stupid, he tapped into something and made a load of cash... good for him.

The names are just priceless man

I've never heard of this story or him before but can see why It's not one of the "Main" Stories.