Are the NSA behind the recent UK government attempt to spy on all UK citizens online activity?

posted on Apr, 5 2012 @ 08:01 AM
link
As per my Op I believe this to be the case, no one in the UK can quite understand why, in the current climate, the UK government would even attempt such a thing. We value our privacy deeply - so it got me thinking…..
I did some research and found an interesting article on the NSA from wired.

Its seems in the US they have been spying on their citizens for years, as per whistle blowers such as Thomas Drake. I quote an article below to give some details on the operation the run as well as the facts know about their domestic spying (US)

But “this is more than just a data center,” says one senior intelligence official who until recently was involved with the program. The mammoth Bluffdale center will have another important and far more secret role that until now has gone unrevealed. It is also critical, he says, for breaking codes. And code-breaking is crucial, because much of the data that the center will handle—financial information, stock transactions, business deals, foreign military and diplomatic secrets, legal documents, confidential personal communications—will be heavily encrypted. According to another top official also involved with the program, the NSA made an enormous breakthrough several years ago in its ability to cryptanalyze, or break, unfathomably complex encryption systems employed by not only governments around the world but also many average computer users in the US. The upshot, according to this official: “Everybody’s a target; everybody with communication is a target.” 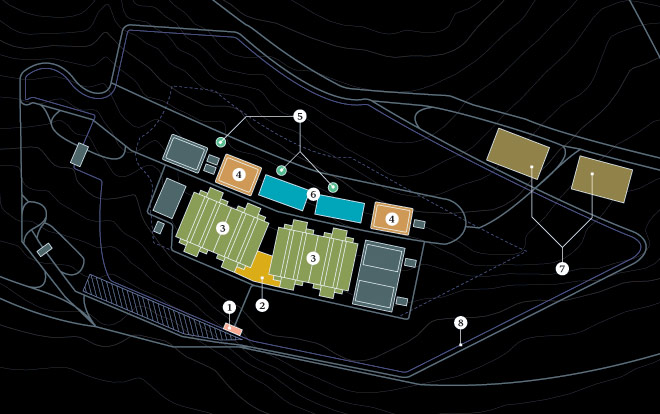 From the same article but further down:


In the process—and for the first time since Watergate and the other scandals of the Nixon administration—the NSA has turned its surveillance apparatus on the US and its citizens. It has established listening posts throughout the nation to collect and sift through billions of email messages and phone calls, whether they originate within the country or overseas. It has created a supercomputer of almost unimaginable speed to look for patterns and unscramble codes. Finally, the agency has begun building a place to store all the trillions of words and thoughts and whispers captured in its electronic net. And, of course, it’s all being done in secret. To those on the inside, the old adage that NSA stands for Never Say Anything applies more than ever. 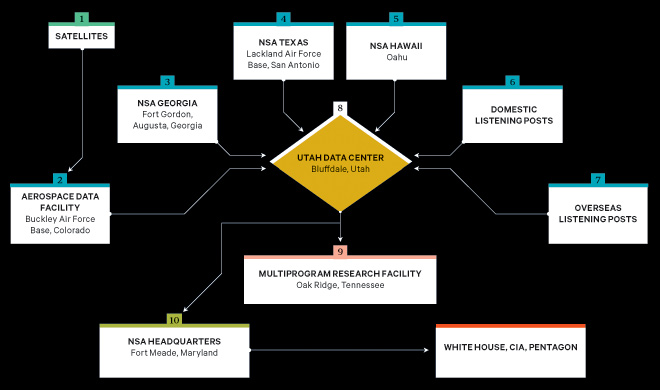 Four satellites positioned around the globe monitor frequencies carrying everything from walkie-talkies and cell phones in Libya to radar systems in North Korea. Onboard software acts as the first filter in the collection process, targeting only key regions, countries, cities, and phone numbers or email.

Intelligence collected from the geostationary satellites, as well as signals from other spacecraft and overseas listening posts, is relayed to this facility outside Denver. About 850 NSA employees track the satellites, transmit target information, and download the intelligence haul.

Focuses on intercepts from Europe, the Middle East, and North Africa. Codenamed Sweet Tea, the facility has been massively expanded and now consists of a 604,000-square-foot operations building for up to 4,000 intercept operators, analysts, and other specialists.

Focuses on intercepts from Latin America and, since 9/11, the Middle East and Europe. Some 2,000 workers staff the operation. The NSA recently completed a $100 million renovation on a mega-data center here—a backup storage facility for the Utah Data Center.

Focuses on intercepts from Asia. Built to house an aircraft assembly plant during World War II, the 250,000-square-foot bunker is nicknamed the Hole. Like the other NSA operations centers, it has since been expanded: Its 2,700 employees now do their work aboveground from a new 234,000-square-foot facility.

The NSA has long been free to eavesdrop on international satellite communications. But after 9/11, it installed taps in US telecom “switches,” gaining access to domestic traffic. An ex-NSA official says there are 10 to 20 such installations.

According to a knowledgeable intelligence source, the NSA has installed taps on at least a dozen of the major overseas communications links, each capable of eavesdropping on information passing by at a high data rate.

At a million square feet, this $2 billion digital storage facility outside Salt Lake City will be the centerpiece of the NSA’s cloud-based data strategy and essential in its plans for decrypting previously uncrackable documents.

Some 300 scientists and computer engineers with top security clearance toil away here, building the world’s fastest supercomputers and working on cryptanalytic applications and other secret projects.

Analysts here will access material stored at Bluffdale to prepare reports and recommendations that are sent to policymakers. To handle the increased data load, the NSA is also building an $896 million supercomputer center here.

Here is a picture of Menwith Hill 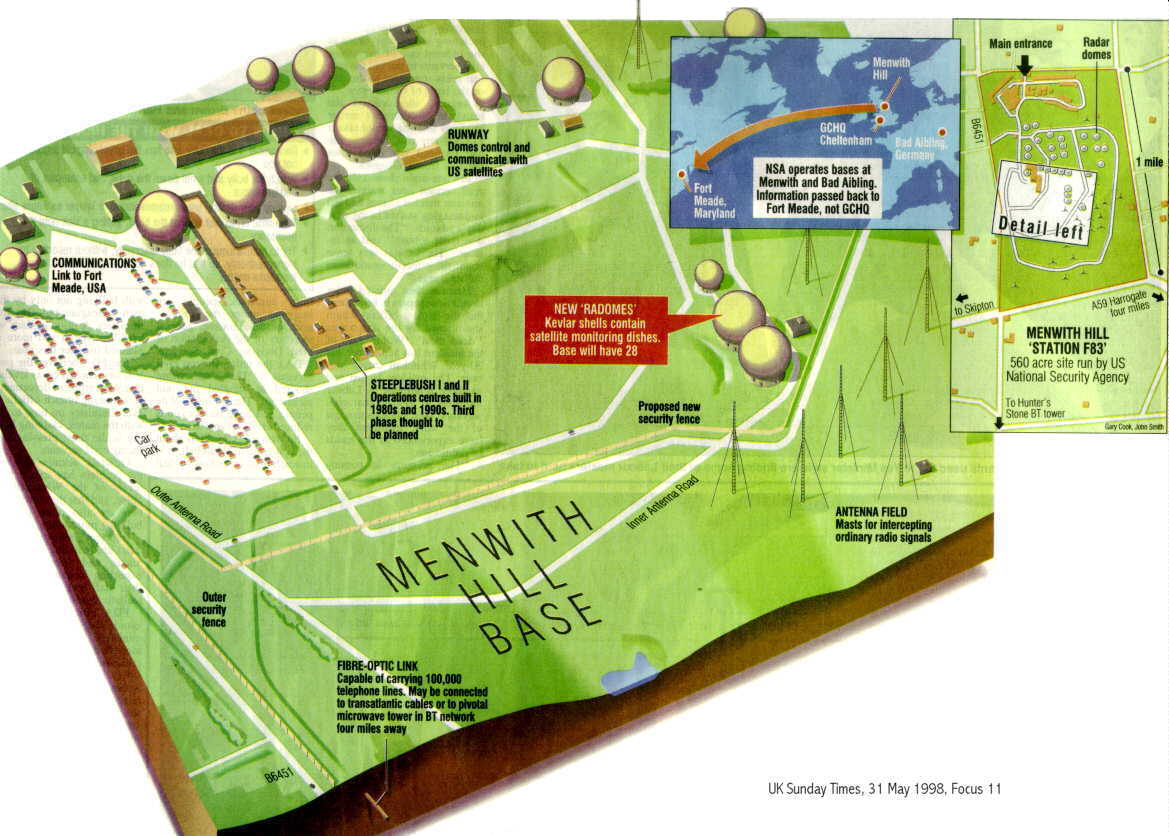 And some more info from an article in 1998 believe it or not!! I quote some of the gems

What goes on behind the razor wire is so secret that far less is known about it than the workings of MI5 or MI6. British ministers in successive governments have persistently dodged the subject when challenged about why the base continues to expand.

John Reid, the armed forces minister, refused to give any information when asked recently why the base has taken on 200 extra staff. "I am not prepared to comment in detail on the operations of RAF Menwith Hill," he said.

That name is itself misleading - it is not a British airbase. Opened in the late 1950s on land purchased by the crown, it was taken over directly by the NSA in 1966 and became its Field Station F83. It is now the NSA's largest listening post in the world. Sprawling across 560 acres, it has an operation centre and on-site town, including houses, shops, a chapel and a sports centre. It also has its own uninterruptible electricity supply.

So the bottom line is the NSA have been opening new data centres and the existing outpost in the UK is also undergoing an upgrade, this is what leads me to believe that the desire to monitor everything we do online in the UK is being driven by the NSA.

These guys need war to exist, in a time of peace, declare war on the public. We are all now public enemy number 1

posted on Apr, 5 2012 @ 08:15 AM
link
Funnily enough, this is very similar to what Labour proposed several years ago when in power and were shouted down by both the Tories and Liberals for being too draconian, which only goes to show that the colour changes but the policies remain the same. The NWO government is already here and has been for a long time, pulling the strings of the puppets underneath them, whether here or in the US or other western 'democracies'.

An absolute joke, but dont worry, those of us that see it, see it. Everyone else thinks we're just paranoid.

Are they behind it, probably 'are they part of it' is a better question. We can get that sort of info here using CALEA. You don't yet have it accessible in depth.

Once you have that capability, then we can both monitor it. That's part of UKUSA, and a big part of why NSA likes to co-site with UK countries. We both have parts of the facility, and we do tradesies. You spy on us for us, we spy on you for you. That gets past any pesky privacy laws or limits on what the other can do on its home turf.


They may believe they need them but what do they need them for? We are all allies after all and we have had peace in most of Europe for over 60 years... perhaps this is how the US have stayed as technological leaders for so long?

These spying operations have long been a concern of the Europeans and I guess they are about to become a major concern of the British public, there will be an outcry if this bill is passed by parliament. I for one would be quite happy to see a million or 2 march on Menwith Hill to stage a protest. Regardless of how Americans view their "National Security"

I have read somewhere that much of the spying was on behalf of US businesses (national security again in some warped way) but assuming every single person is a pedo or a terrorist is a disgusting way to treat your voters quite frankly.

Who actually oversees these guys anyway? We know from past history if a President doesnt like what these agencies are doing he gets his head blown off in Dallas, or whatever.

Originally posted by trustnothing
reply to post by Bedlam


They may believe they need them but what do they need them for? We are all allies after all and we have had peace in most of Europe for over 60 years... perhaps this is how the US have stayed as technological leaders for so long?


We've had UKUSA in some form or other since WW2. We're big buddies at the intel level.

...there will be an outcry if this bill is passed by parliament. I for one would be quite happy to see a million or 2 march on Menwith Hill to stage a protest. Regardless of how Americans view their "National Security"

I've been hearing one or another of Parliament and your security services stating that this was on the way for about three years, it started gaining ground after the subway bombings in 2005.

I have read somewhere that much of the spying was on behalf of US businesses (national security again in some warped way) but assuming every single person is a pedo or a terrorist is a disgusting way to treat your voters quite frankly.

You hear all sorts of things. I can't imagine NSA conveying info to businesses with one half of my head, but with the other - who knows. I do know you can't go to France on a technical visit without DGSE rifling your computer and briefcase. The Chinese will always plant something on your computer, so you wipe it on return. It's dog eat dog.

Who actually oversees these guys anyway? We know from past history if a President doesnt like what these agencies are doing he gets his head blown off in Dallas, or whatever.

JIC for you guys, DOD for us.