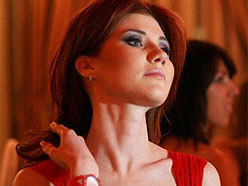 "We were becoming very concerned," Figliuzzi said, the U.K.'s Daily Mail reports. "They were getting close enough to a sitting U.S. cabinet member that we thought we could no longer allow this to continue."

It seems the recent timing of the ousting of Russian sleeper agents was due to the fact one of them was close to using the old "spy in my bed" tactic.

Interesting... And who said the spy game has died out since the cold war?

Very much alive and will continue to be.

www.lfpress.com
(visit the link for the full news article)

"Let me be clear. It wasn't my idea to send her back. I thought maybe they'd take Rush Limbaugh or something. That would've been a good move."


I can see why she was getting close.

click the picture and a slide show comes up.

Didn't find any news stories of US honeypots getting cracked though. Hmh, wonder if our media just calls them hikers of something.

James Bond approves of this.


Obama nearly completed a campaign promise: We the people


I can see why she was getting close.

click the picture and a slide show comes up.

I should also enter this into evidence as well. As exhibit zero.
edit on 3-4-2012 by boncho because: (no reason given) Not because she was trying to use me to get at state secrets but, because they deported her before she could seal the deal.

And I think the FBI clarified their statement in saying that she was not close to sleeping with a cabinet member.

Originally posted by Laxpla
Shes not that great and if I seen her at a bar/club I would not look twice and surly not worth giving secrets too.

And I think the FBI clarified their statement in saying that she was not close to sleeping with a cabinet member.


Of course, they're prohibited from acknowledging it was Barack himself and that's why Michelle was so pissed over the Obama'nation. Just another National Disgrace Against Amerika, NDAA.


You get this information from? Or is it your opinion?

Hmmm...male or female? She could appeal to either, and wouldn't the latter be even jucier?
Just an open-minded consideration.

I'm a little more bigger then that guy you linked.

Originally posted by Laxpla
reply to post by Kolya

I'm a little more bigger then that guy you linked.


That is really embarrassing if you just posted a picture of yourself. Really really.

Originally posted by Laxpla
a little more bigger then that guy you linked.