posted on Apr, 3 2012 @ 09:24 AM
link
OK, so I was just watching CNN and the anchor was doing a tease for an upcoming segment on the reality show The Biggest Loser. She reported that Michelle Obama was going to open up the doors of the Oval Office for a taping of the show, with participants working out there. Apparently it won't be the first time, something of which I was unaware. 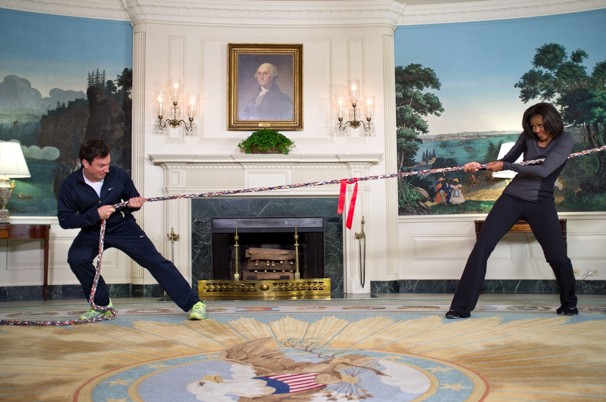 Is this what our government has been reduced to, participants in a game show? Don't answer that, it was a rhetorical question; of course it's a game show, with occasional comedic and tragic skits to keep our attention focused away from the fact that our government is broken and TS is just about to HTF.

Our once Great Republic is in the hands of corrupt men and women, liars and fools, clowns and losers; Michelle Obama being one of the biggest.

There was a thread the other day that insisted President Obama be respected simply due to his office. I would say the President's wife is showing the world exactly what she thinks of the Office of President of the United States - she's pissing on it, just as her husband is doing with the Constitution. The Obama's aren't in the White House to serve the country; they are there to destroy it, as has been the plan all along.

posted on Apr, 3 2012 @ 09:36 AM
link
Doing some taping in the White House could be acceptable, but actually IN the Oval Office? I hope not. I realize respect for the office just about went out the window in 2008 but hopefully something is still sacred.

She came in second but at least the title remains in the family.
edit on 3-4-2012 by Nite_wing because: (no reason given)

Originally posted by Nite_wing
I don't believe Michelle is the biggest loser.

She came in second but at least the title remains in the family.
edit on 3-4-2012 by Nite_wing because: (no reason given)

To answer jjkenobi, she's ALREADY turned the Oval Office into her workout room on TV. The above pic is of her on Jimmy Fallon's show, from the White House archives.

ETA: I just found this.

And they're hitting every branch on the way down !

The acorns are falling too.

But just the same,

Michelle was a good lawyer....

for the entire 4 year career she had !
(or whatever it was)

Americans rank FIRST in the world amongst every nation for Obesity.

The percentage of US school children that are obese has more than tripled in the past 20 years. We are first in the world for overweight children.

Now lets attack the first lady for trying to use her position to make a difference.


I look at the picture in your OP and have to wonder what George Washington would think of the three ring Hollywood circus being performed right under his nose.

posted on Apr, 3 2012 @ 10:14 AM
link
Michelle Obama is using her position to raise awareness of a very serious health issue.

OK, so maybe the Oval Office isn't the perfect place to do it...but if it raises awareness and gets people talking (in a harmless way), then its only going to benefit the American public, right?


Ask yourself why those children are so Obese? What factors have changed so greatly in the past 20 years? Why are children glued to their take anywhere game consoles, I phones, I pads etc etc? Turning the oval office into a sound stage isn't going to change a damn thing.

Lets look at life factors, parenting skills, etc etc etc. We know our food is garbage, and full of growth hormones etc perhaps michelle can put an end to genetically altered meat and hormone infused dairy products that are being fed to kids in cafeterias being monitored by govt. workers.

It's complicated... Michelle is just a Hollywood wannabe who loves the spotlight.... Who needs something to keep herself busy.


The answer to obesity is right here;

right from the best experts that money could never buy !

Originally posted by ComeFindMe
Michelle Obama is using her position to raise awareness of a very serious health issue.

Which is perfectly acceptable to me.

OK, so maybe the Oval Office isn't the perfect place to do it.

but if it raises awareness and gets people talking (in a harmless way), then its only going to benefit the American public, right?

Originally posted by Indigo5
Now lets attack the first lady for trying to use her position to make a difference.


It will raise awareness of a very significant issue in America right now. I mean, we are talking about it now when we weren't yesterday!

Why do you think that is not the case?


Originally posted by Indigo5
Now lets attack the first lady for trying to use her position to make a difference.

Oh please, talk about scraping the barrel for a criticism! Is that really the biggest critique you can mount? She chose the wrong room / building?

Originally posted by jibeho
reply to post by Indigo5


Ask yourself why those children are so Obese? What factors have changed so greatly in the past 20 years?


Nutrition....Monsanto...Cheap, industrialized food that trades corn syrup, sugar, and chemicals for what actually used to be FOOD and real FLAVOR.

And yes ...secondly, activity. You and I are of a generation that used to spend our afternoons OUTSIDE. Parents hover over thier kids these days. Most families in my nieghborhood used to have big bells hanging by the back door. When it was time to eat, we each knew the sound of our bell...till then we were running wild in the backyards. Now parents strap thier kids in elbow pads, knee pads, helmet and trot beside them down the sidewalk as they ride thier bikes.

Michelle Obama has started programs both encouraging kids to get outside and be active as well as nutrition.

I have no issue with the first lady trying to make a difference and only a political and cynical mind would have issue IMO.


Originally posted by Indigo5
Now lets attack the first lady for trying to use her position to make a difference.

You don't want to go down that path. The things that the last President and family did in the white house...and to be fair most every POTUS n Family before that...Do you want to know who has spent the night in the Lincoln Bedroom?

A program about fitness and weight loss is the least of it. Don't make me pull up comparisons.