The "individual mandate": the Right's objections are all about freedom, right?

Now let me be clear, I detest the individual mandate. If I had my way, the completely superfluous parasitic tick that is the health insurance industry would be dissolved in favor of a humane and sane universal care policy akin to what most of the civilized world enjoys.

That said, here is a partial list of Republicans who publicly endorsed strongly for the FEDERAL individual mandate -- some even sponsored bills where the mandate was the central feature. After all, is was an invention of the Right. The ONLY reason they are against it now is because Obama adopted their idea in his sad and poorly judged attempt to gain their support. He should have known early on that literally EVERYTHING and ANYTHING he endorses would be vehemently opposed by the Right. This is further proof that the greatest political hypocrites of all time wear the Republican label today. Don't ask me for links; for once search out facts instead of picking up your bibles and pitch forks everytime Limbaugh opens his cavernous mouth:

That's a partial list. So while the Left has its share of characters, the Right, as far as I'm concerned wins the prize for flagrant hypocrisy. Yeah right, it is about the Constitution and freedom. The Right cares not a wit about either; they are just talking points to rile the historically and willfully ignorant.
edit on 2-4-2012 by pajoly because: sp?..my own brand of lunacy
edit on 2-4-2012 by pajoly because: few tweaks, e.g. their endorsement was for a federal, so please no attempts to say they were talking about state's rights

posted on Apr, 2 2012 @ 08:47 PM
link
Ahh....mandates. Conservatives often complain about those who don't have insurance and are still able to get care....and completely against mandates.

But why are people not denied emergency care in hospitals in the first place? Who supported this MANDATE?And who signed such a law?

In 1986, the Emergency Medical Treatment and Active Labor Act known as EMTALA (Section 1867 (a) of the Social Security Act) and sometimes referred to as the "Patient Anti-Dumping Act" was passed by Congress and signed into law by President Reagan. The purpose of the Act was to ensure that acutely ill patients who are uninsured or underinsured receive appropriate emergency care and to prevent hospitals from refusing to treat certain populations of patients who present to the emergency department.

Although EMTALA was passed to protect those who lack financial resources or medical insurance, it applies to all seeking care from a hospital's emergency department in all states and territories of the United States. However, not all hospitals have obligations under EMTALA. Only hospitals that accept federal funds from the Centers for Medicare and Medicaid (CMS), a branch of the Department of Health and Human Services (HHS), are subject to civil liability under the Act.

Ronald Reagan....the so called idol of the modern day Republican Party. The extremists in the GOP today would never accept such a measure.

And by bringing this up...it's not to insult Reagan. This was a good thing he did among many bad things. It didn't help with costs....but no one should be denied treatment.

I'm wondering those who are against such measures, should it come down to it, would they deny themselves emergency care because they didn't have insurance (because of reasons not their fault), just to satisfy their own ideological beliefs...even if death would be the result???
edit on 2-4-2012 by David9176 because: (no reason given)

Ironically, he says, "EMTALA was a vehicle that was designed, in large part, to provide protection to Medicare and Medicaid patients. The fact that, in the end, it applied to all patients in all hospitals, even undocumented immigrants, was interesting. And it was good that it did get applied to all patients, especially those whose transfers were economically motivated."

It should be added that the disturbing stories about improper transfers disproportionately involved patients who were members of minority groups, which raised both civil rights concerns and advocacy group ire. And so, in 1985, a four-page provision called the Emergency Medical Treatment and Active Labor Act was inserted into the Consolidated Omnibus Budget Reconciliation Act, which was duly passed and eventually signed by President Ronald Reagan on April 7, 1986.

What Does It Mandate?

There are many misconceptions about what the law requires of hospitals. It does not outlaw transfers of patients who cannot pay or who are otherwise deemed undesirable. It does not (at least as of this writing) require that hospitals provide all care in perpetuity to a patient who receives an evaluation in the ED. It allows for waivers in some situations, such as natural disasters.

What it does require:

That all patients seeking care in an emergency department be evaluated by a competent clinical professional, and if found having a condition requiring emergency care must be treated until stabilized before any transfer.

For women in active labor, the hospital must deliver the baby unless the institution is not equipped to do so (as in the case of a high-risk pregnancy and the lack of a neonatal ICU).

The hospital to which a stabilized patient (or one who must be transferred because the originating hospital does not have the necessary services or personnel) is to be sent must agree to accept the patient. The patient must consent to the transfer, if possible.

However, EMTALA remains the source of controversy. David C. Seaberg, M.D., president-elect of the American College of Emergency Physicians, says that for his membership, "It's a double-edged sword. The good side is that patients with emergency conditions are being taken care of; they must have an evaluation exam and they have to be stabilized. The negative side is that EMTALA is the largest unfunded mandate [on providers] that the government has ever instituted."

More info on this mandate.

It's in my opinion that mandates should be dumped entirely in favor of a single payer system, Medicare for all. Part E...for EVERYONE. We already pay medicare taxes...I'd rather pay more into that and receive care that senior citizens certainly seem to love....and drop insurance altogether...although it should still be available as a secondary option or backup.

posted on Apr, 3 2012 @ 08:06 AM
link
Tom Tomorrow nails it in this editorial cartoon;
Health Care Reform: A Brief Glossary of Terms 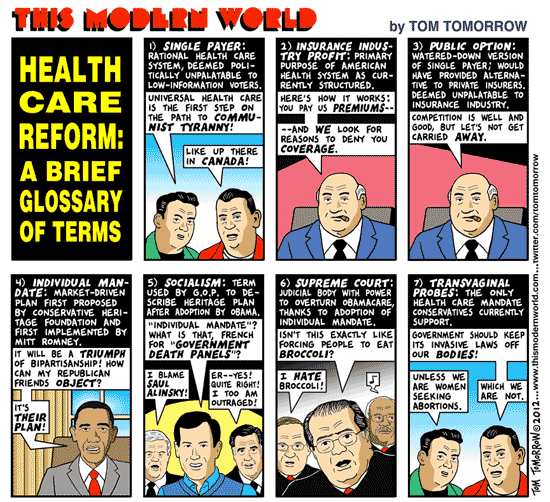