Researchers Capture First-Ever Images of Atoms Moving in a Molecule

Using a new ultrafast camera, researchers have recorded the first real-time image of two atoms vibrating in a molecule.

The team used ultrafast laser pulses to knock one electron out of its natural orbit in a molecule. The electron then fell back toward the molecule scattered off of it, analogous to the way a flash of light scatters around an object, or a water ripple scatters in a pond. 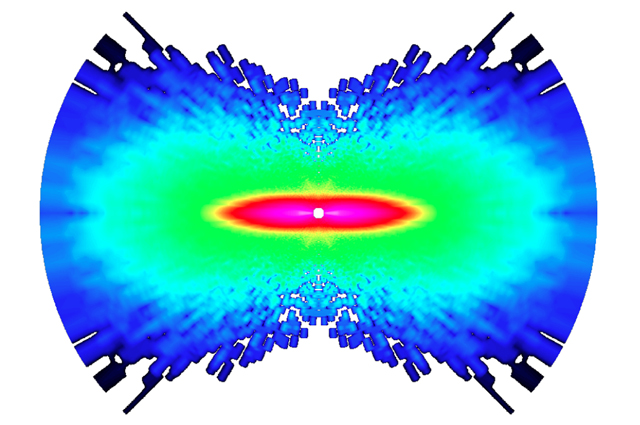 Researchers at Ohio State University and Kansas State University have captured the first-ever images of atoms moving in a molecule. Shown here is molecular nitrogen. The researchers used an ultrafast laser to knock one electron from the molecule, and recorded the diffraction pattern that was created when the electron scattered off the molecule. The image highlights any changes the molecule went through during the time between laser pulses: one quadrillionth of a second. The constituent atoms’ movement is shown as a measure of increasing angular momentum, on a scale from dark blue to pink, with pink showing the region of greatest momentum. Image courtesy of Cosmin Blaga, Ohio State University.

So ATS, what applications can this new photograghing/particle manipulating methodology be useful in? And, what inferences can we make about the picture itself?


Very nice! Looks like a galaxy. As I understand it, the nucleus is the dot in the middle..? Then the torus around it is the energy field in which the electrons buzz about...? So again we see how the universe replicates patterns at the atomic scale that is found at the galactic scale!

A brain cell is the same as the universe

Understanding of chemical reactions at the atomic scale will help us create even better materials such as graphite, and lead the way to nanobots. Progress rules
edit on 22/3/12 by PadawanGandalf because: spell it betta!


Glad you seemingly enjoyed this as much as myself. It's so cool to see things like this - "proof" how much the micro and macro are alike. And quite honestly I think I'm fairly intelligent, but after reading the articles 10 times I have no idea what exactly this picture is all about