Really disappointing video, most certainly a bug or a bird

There are multiple things you must take into account.

2) Focus. If these objects are very close to the camera, and the camera is focused on the jets flying by, the objects are probably not in focus. Out of focus objects tend to appear round and a bit larger than they are.

3) Video compression. Depending on the type of format this video was saved as, the video compression could distort the edges of the object that blend with the sky.

There are other things...

Originally posted by seeker1977
Wow, MSNBC is weighing in on this case at the below website.

They even mention the Above Top Secret crowd there

"For some of the denizens of the Above Top Secret online forum, the nature of the spot, or spots, was obvious: It's a bug, or bugs."


ATS now being quoted in the MSM as a way to discredit the most potentially interesting case I've come across since I came here. Thats the rock bottom folks.

This thread should be full of people demanding the evidence be provided for analysis. Give it an even break. It might be a bug and it hinges on the other videos and analysis thereof. But, what if they do stack up?

Instead we get post after post of people who don't need to evaluate evidence. The people involved must all be liars and it must be a bug. Just forget about it folks, back to the unthreatening Galactic Federation of Light rubbish...

For the average reader, if even the conspiracy nuts aren't interested why is it worth their time to give it a fair shake.


Yeah have just gone back through the thread and saw that a bit ago. For those new to the thread, also found this :

Originally posted by Orkojoker
Here's another comment from Leslie Kean from an email sent to msn.com's science editor Alan Boyle.

"I went back to the CEFAA official re the bugs, and he said that's what they all thought at first when they got the first film (the one I posted). But when they went and got additional footage from very different vantage points which showed the same thing, they knew that was impossible. I don't think they're that stupid to claim this is a UFO if it was a bug, given that so many experts looked at it."

And one more from Boyle's article, expressing something we should probably all consider:

"Maybe we'll find out it's a bug, but I seriously doubt it," Kean told me. She said she took Bermudez and his fellow investigators at their word. "All I know is that people who know way more about photo analysis than I have ruled that out," Kean said.

Seems pretty unlikely when you put those things together.

But that is no bug. It's just not.


How can it be a bird though considering the camera is recording at 24 frames per second? it moves across from one side to the other in around .15 seconds. Fast bird.


The idea though is that the reason the bug can move so fast from one side to the other is because of its proximity to the camera lens, one camera lens. Assuming the other cameras where not stacked on top of one another, you probably couldn't get that same affect from multiple cameras.

Originally posted by Turq1
Assuming the other cameras where not stacked on top of one another, you probably couldn't get that same affect from multiple cameras.


Originally posted by Turq1
Assuming the other cameras where not stacked on top of one another, you probably couldn't get that same affect from multiple cameras.

It is a possibility but it requires the analysing people to be a little dim.

You would assume they did some analysis of the viewpoint from which it was taken, attempted to match time taken, examined the apparent trajectory and found a correlation.

I have a hard time believing that serious people mistake 7 different random bugs in 7 different videos for the same object.

Again, need the data for independent inspection before any conclusion can be drawn. 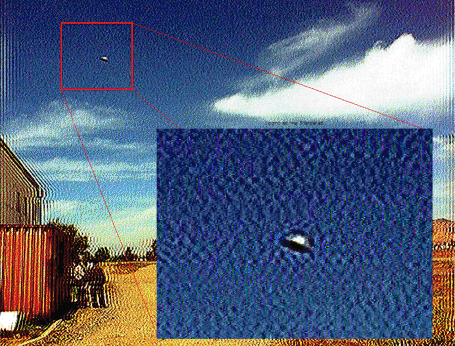 It's just beyond belief.


Check out this video of bee's attacking an RC toy at around 1:51:
www.youtube.com...

Here is an image I captured from it:

Who would have thought that the wings of insects would reflect light at certain angles. Wow, it's just beyond belief!

( I didn't even adjust brightness, or contrast, or run any "sharpen" algorithm on the image like they did on the "UFO" image above ).
edit on 16-3-2012 by UFOGlobe because: (no reason given)

Agreed, just hoping we get that, and if we do.....well, there we have it. Of course, we've been here time and time again for decades, so we'll just have to wait and see.

And yeah I get what you mean with the bug thing, but when you look at the shape it does look good.
edit on 16-3-2012 by robhines because: added

It looks metallic, it appears to be flying, it's an unknown object with circular shape and reflects light.

Unless it's a really small metallic bug species we haven't discovered. [/sarcasm]


For the object to have been a bee for example, it would have to be about no closer than 10ft maybe to the camera to get the right size. Not sure what that would translate to for the distance between one side of the picture to the other, but let's say 30 ft...a bug traveling 30 ft in around .15 seconds?

My first thought was bugs to be honest, the only thing that makes me think is that it was seen from 7 angles, surely one angle would be much further away from the other camera so it would not have been picked up as a bug very close to the camera?

Edit: damn, missed the post two up re the angles, well at least we think alike, great minds and all that
edit on 16-3-2012 by Mclaneinc because: (no reason given)


My sentiments exactly, as a non expert.

What it is, is an anomaly on a piece of video......If the same anomaly is on all 7 or more videos, then it IS something.

There is no doubt it is moving fast, and probably beyond the normal perception of the people there...their minds would have been on the jets.
Yes we can often "Sense" these "Things", that is because we still have hunter and fight or flight genes and mechanisms in our biology. Possible someone did "Feel" something they werent sure of at the time.

Remember the Original Star Trek episode, with the other dimension beings who moved too fast for Humans to detect....Well??
We are the same...our "Life" and reality is 1000 times faster than for a majestic tree..eg the Redwoods, etc. some of them live 1000s of years.........1 day to them, is probably 1 minute to us.....just think about that. Same with Insects that live for a month or so.
Never say never.....or "Just a bug"

1) This happened over a year ago and people are still working on analyzing this? If the evidence was truly that good, it would take a few months at best to come up with a reasonable analysis to demonstrate it was something not of this earth.

2) It is being leaked out to various UFO blogs instead of publishing in a scientific journal. If it were good evidence, that is where it would appear, and not the Huffington Post.

3) The videos are unavailable to be analyzed from outside sources. Perhaps they learned from the Mexican Air Force video debacle. Once the videos were revealed in sufficient length, many people identified the source of the images as being from oil wells in the gulf. A lot of people had egg on their face from that one. NARCAP was initially involved with that one, but then later stated they could not properly analyze the video because of the provenance being questionable or some excuse similar to that.

4) The videos have no provenance. We don't know what has been done to them since the day of the event.

To me point 3 is the most important one. This is a classic red flag when it comes to UFO videos and we see it again and again. The fact that someone is hiding something is obvious. I emailed astronomer Luis Barrera yesterday about his supposed involvement in this case and I am eagerly awaiting his reply.