Danish researchers have announced a rather wild hypothesis: Perhaps we are getting fatter and fatter because of the increasing CO2 levels in the atmosphere.

The article starts by stressing it is not an early April Fool's hoax.... and then proceeds to lay out an interesting series of what some may call coincidences, others will call correlations, some will suspect causation... and nearly every resentful antagonist of the notion of global warming will - without reading the article - simply scoff and dismiss as nonsense.

But nevertheless, this is a worthy "thinking out of the box" read...

SienceNordic.com brings us a look at a rather surprising theory: CO2 makes you fat

Hersoug was surprised to see that both fat and thin people taking part in the studies over a 22-year period had put on weight – and the increase was proportionately the same.

Orexins – which are neuropeptide hormones – in the brain stimulate wakefulness and energy expenditure. These hormones may be affected by CO2, and this can cause us to go to bed later, affecting our metabolism so it is easier for us to put on weight. But orexins are also involved in the stimulation of food intake.

“The normal theory is that fat people get fatter because they don’t move as much as they should,” says Hersoug, now a post-doc at the Research Centre for Prevention and Health at Glostrup University Hospital. “But the study showed that thin people also get fatter, and this happened over the whole of the 22-year period of the study.” 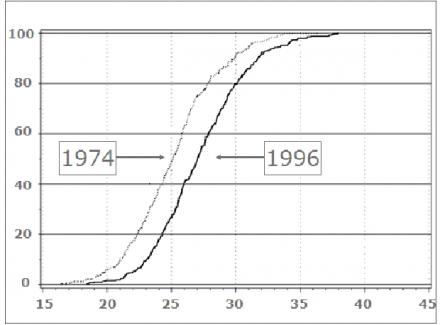 Results of obesity measurements taken in connection with the MONICA studies (Monitoring of Trends and Determinants in Cardio-vascular Disease) in Denmark. The X-axis (horizontal) shows body mass index (BMI), while the Y-axis shows the accumulated frequency. Everybody studied is included at the top of the graph (100 percent on the Y-axis), while the average BMI is placed at 50 percent. The graph is steepest where the most people are represented, while it is flatter where the fewest people are represented. There are few very thin and few very fat people. The measurements were taken in 1974 and 1996. Both fat and thin people had put on weight over the 22 years – and the increase was proportionately the same. (Graph: University of Copenhagen, T. Drivholm)

- Overall weight gain in the US was fastest in the period 1986-2010 on the east coast – where CO2 concentrations are highest.

- A study of 20,000 animals in 2010 showed that all the animals put on weight, even though they were given food under controlled conditions and should therefore not have put on weight. When researchers studied rats in both urban and rural US, the result was the same.

- In 2007, a study revealed that the pH value of blood – its acidity – affects nerve cells in the brain that regulate our appetite and metabolism: Orexins

When getting in shape, get lot's of fresh air, visit higher elevations (mountains) and forests for exercise... (and remember - being fat is incidental, not a reflection of you personally... unless you make it so.)

Future research will tell us more... if there is more to tell. Read the article...

posted on Mar, 13 2012 @ 04:33 PM
link
for all us vegetables
you mean to say its the bubbles in the soddy pop and not the thirty seven spoons full of sugar..?
well thats a relief

I'm wondering if fat people eating more food unsequesters more CO2?
edit on 13-3-2012 by Danbones because: (no reason given)


I'm sure some other Mod will think so.... but I find a difference in both where I placed this, and what is provided in the thread... which includes a link.... I guess I should have used "epidemic" and "obesity" in my search...


ha its cool urs has more info anyways, but idk if co2 makes people fat maybe its the food they eat while their drinking their carbonated sodas

No honey you look like you are sequestering Co2 in that dress...
damned glad we have free trauma care in Ontario