Citizens United Ruling: What? You Didn't See This Coming?

posted on Mar, 13 2012 @ 12:41 PM
link
Well, the first round of numbers involving spending for the election season are surfacing and they are outrageous to behold.

For starters: outside spending in this election cycle of almost $90 million is 234% percent of 2008’s numbers, and 628% of 2004’s - and that's before the Super PACs start raising money for the general election.

More: ...from 2006 to 2010 the percentage of spending from groups that did not disclose their donors rose from 1% to 47%; in 2010, 72% of political advertising by outside groups came from sources prohibited from spending money in 2006 - ie: corporations.

If you aren’t sure Citizens United gave rise to the super PACs, just follow the money

Be sure to check the graph at the bottom of the above stories (it's the same chart on both).

Seems the writing is on the wall. Just as many of us have said, or joked about, this is truly the best government money can buy. How can someone such as you or I have a voice in today's elections when we are so easily drowned out by truckloads of money being dumped on the candidates?

Regardless of your political affiliation, this just seems so very, very wrong and counter-intuitive to what our Founding Fathers intended.

"I hope we shall crush ... in its birth the aristocracy of our moneyed corporations, which dare already to challenge our government to a trial of strength and bid defiance to the laws of our country" ~ Thomas Jefferson

posted on Mar, 13 2012 @ 12:49 PM
link
Oh, I think we all saw this coming the second that Supreme Court made the horrible ruling that corporations are people.

Super PACs would make the Founding Fathers roll over in their graves.

USA greatest democracy in the World? Don't make me laugh. USA already has the most corrupt politicians in the WORLD (they just call it "lobbying" to make it all seem rosy and good) and now are allowing this?

The political election process has been totally bastardized from what the Founding Fathers envisioned for the country. Democracy? I'd laugh at you if I weren't crying over the biggest failure of democracy in the history of the world.

Something akin to this happened during the Roman Empire. The Senate became run by corrupt politicians who had rich financiers (or at the worst, the rich financiers had the Senate seats themselves) and the more the corruption set in, the worse off the people of the Roman state became. USA is heading in the same direction, just a little over 200 years after inception.

US citizens have to start realizing that LOBBYING is no longer thinly veiled BRIBERY, it is DIRECT BRIBERY. The people of the USA allow their politicians to be bribed by people openly plying their trade on Capitol Hill, and do absolutely nothing about it.

The country soon to be formerly known as the United States of America will collapse under the weight of the ignorance of its own people.

posted on Mar, 13 2012 @ 12:59 PM
link
Welcome to today's installment of "Disgrace the Nation". Lobbying should be a capitol crime. As should accepting favors from a lobbyist. That will never happen because Democrats and Republicans are equally greedy and would sell their own mothers for a fistful of dollars. 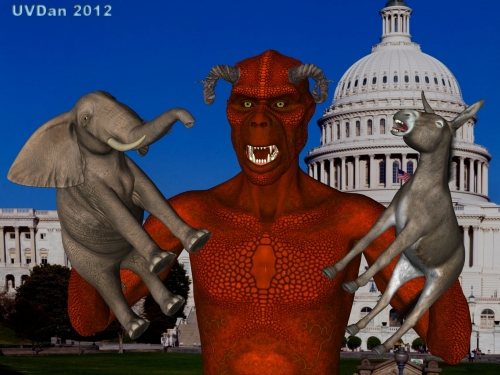 Originally posted by groingrinder
Welcome to today's installment of "Disgrace the Nation". Lobbying should be a capitol crime. As should accepting favors from a lobbyist.

In many countries that the USA calls "corrupt", most notably China, bribery of a public official and accepting that bribe is a death penalty offense.

The people of the USA, and other nations where lobbying is allowed (such as Canada) should be DEMANDING and end to lobbying of their politicians by public interest groups and corporations, and demanding that we go back to a time when politicians worked for the people.

Bribery of public officials has become so accepted that "lobbying" (read "bribery") companies actually have offices on Capitol Hill and can be openly hired by corporations and groups that don't have their own "lobbying" officials. Bribery is now such an accepted policy that we can pay others to do it for us and it's all fine?


Going by the proper dictionary terms, you would be considered "spot on".

So how does the dictionary define these two words?

BRIBE : 1. Money or any other valuable consideration given or promised with a view to corrupting the behavior of a person, especially in that person's performance as an athlete, public official, etc

2. Anything given or serving to persuade or induce.

Okay, now how about "lobby"?

LOBBY : 1. To solicit or try to influence the votes of members of a legislative body.

Pretty fine line if you ask me. But then again, I'm not a politician.


Amen! Hallelujah! Tell it brother, tell it! You are preaching to the choir here. Our Constitutional representation is being discarded by the wayside so Washington insiders can make money. Then these financial geniuses run the country into the ground after they have used insider trading to make their fortunes even as America crumbled.

posted on Mar, 13 2012 @ 07:10 PM
link
Yes, it is criminal that these corporations are permitted to attempt to equal the donations of other groups, which are in direct opposition to them, namely big labor unions. When following some of the links, contained within one of the OP sources, I found this chart, which attempts to give the false impression that Conservatives are accumulating the lion's share of campaign contributions. 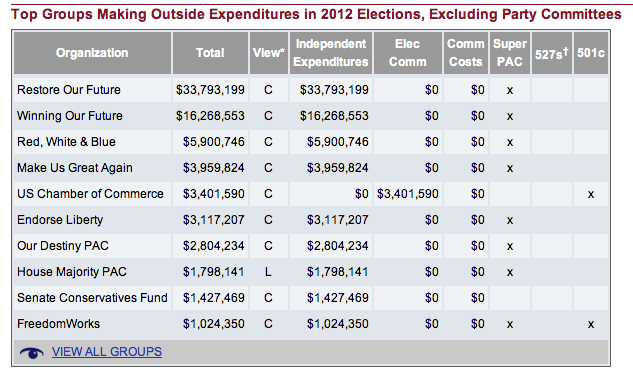 However, what it fails to account for is the amount of contributions from the many other sources. One example is the American Federation of State, County and Municipal Employees, which was the top overall contributor in the 2010 elections and will exceed that this year.

In the campaign arena, AFSCME remains a veritable juggernaut. The 1.6 million-member union has indicated it will spend $100 million in the 2012 elections, surpassing the total it spent in 2008. But the question is not whether the group can muster up the necessary resources, but rather how it chooses to distribute them.