Proof of Alien Artifacts on the Moon. This might be huge.

posted on Mar, 12 2012 @ 12:54 AM
link
Hello ATS. I present to you on this day of March 12, 2012, for the first time ever, highly artificial looking structures on far-side of the moon which must be extraterrestrial in origin since no humans have landed on far side of the moon. I've uploaded the video which is self explanatory on Youtube. Data was pulled from NASA LROC database in real time as to remove any doubt there were any middlemen (besides NASA) or tempering involved. The video shows official NASA data being pulled in real time. This isn’t fake.


Full screen is the only way to go imo.

I will show a section of a crater wall of Tikhomirov T, likely to be millions of years old due to the smoothness of the crater rim and numerous sub-craters.

On this crater wall, I will locate

1) Highly reflective rod-like object 5-7m in diameter but at least 50m high and straight as an antenna.

3) This is the bomb that blew my mind. In the area from 2) there is one rock formation that clearly spells out a word in English, each letter formed by a separate rock about 5m in size. Ya really. Odds of a natural process resulting in four rocks of similar dimensions resembling a letter of English alphabet and then to be lined up side by side and in correct order to form an actual word? Astronomically low. If this isn’t the smoking gun evidence of alien artifacts on the moon and therefore existence of extraterrestrial life, I don’t know what is…

You will understand when you see it.

posted on Mar, 12 2012 @ 01:04 AM
link
Thanks all for the welcome! I made a few posts in the past but couldn't hit the 20 mark but really wanted to get this out there so used the intro forum and hopefully it can be moved to the appropriate area.

Its in the introductions forum.

Ok, watched it and I see...nothing.

Originally posted by PINGi14
You will understand when you see it.


Sorry, I dont understand any of it.
I took the time to watch the whole video (in full screen) and you're drawing red boxes around things that I personally find absolutely nothing unusual about at all.
And then at the end you circle a crater and type OMG to something totally boringly ordinary.

I dont get it.

....I gave you the benefit of the doubt. And, saw nothing to match the tantalizing descriptions that were promised.

Perhaps if you had waited for the requisite 20 posts? Gotten a feel for the place first?

To the OP, no matter how cool or lame this video is the introduction forums is meant for just that, you introducing yourself. If the Mods are feeling gracious they may move your thread but they'll most likely lock this thread & tell you to wait until you've reached your 20 post minimum before you can create your own thread
edit on 12-3-2012 by Swills because: (no reason given)

posted on Mar, 12 2012 @ 01:19 AM
link
You'll have to forgive an old bloke but I am seeing absolutely sweet F all. Just the moons surface.
What artifacts?

Well, what do ya know, the forum changed!

Now that is a very interesting possibility about their being things on the moon. It would be the place, wouldn't it? How many eons could something be there if it could survive any time? Nothing much changes on the moon unless a meteorite actually strikes that spot, right? Hmmm S/F!
edit on 12-3-2012 by Wrabbit2000 because: Updated Post

Originally posted by boncho
"Check out these pictures where I apply 10 different filters and then we see alien bases."

Is this how we welcome new folks to ATS?

Yes, perhaps PINGi14 could have been a bit more patient and posted another 6 posts before starting the thread, but it's hardly the end of the world. The thread was moved from Introductions to Skunk Works in an effort to give the new member the benefit of the doubt. So let's move forward and focus on the presented theory and not on the fact that PINGi14 is a new member.

posted on Mar, 12 2012 @ 01:39 AM
link
The original comment in this space was intended for a post in the Introductions area.

With the moving of the thread to here, that intended post is not of value.


Please refer to the explanation above for my deletion ..

Apologies, and carry on... (in a civil like manner please)

posted on Mar, 12 2012 @ 01:51 AM
link
The only unusual thing i noticed is is that you got hold of the cassette tape for an elevator, and recorded the sound of you typing on a keyboard.

Really? i don't see anything out of the norm. No offence, but i think you are reaching wayyyyy too far, in the same way that jesus is seen on slices of toast, or animal shapes appearing in the clouds.

I'd like to think there are anomalies on the moon, but i am just not seeing any in this particular video other than shadows, rocks, and craters.

Anyway, I was left with the feeling of "Get on with it!!" and "Why am I listening to elevator music??" for the most part and that I didn't see anything of significance, except for what I believe was called the antenna...

I've taken a screen shot just after the image was sharpened a bit... 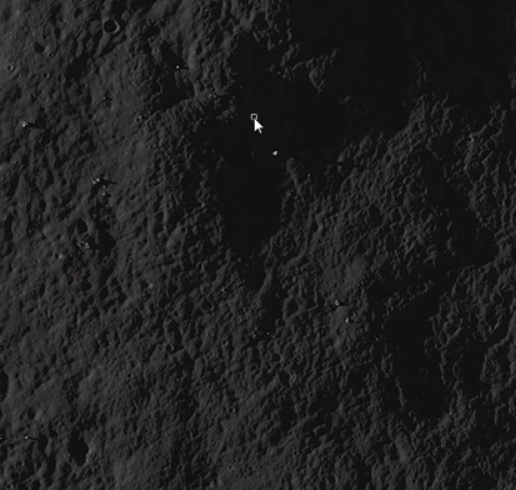 I haven't checked the original image myself yet, perhaps the OP can provide a direct link to it?

But it seems to be there and cast a good shadow, which is parallel to other shadows in the image.

Dunno what it is, but it is somewhat interesting.