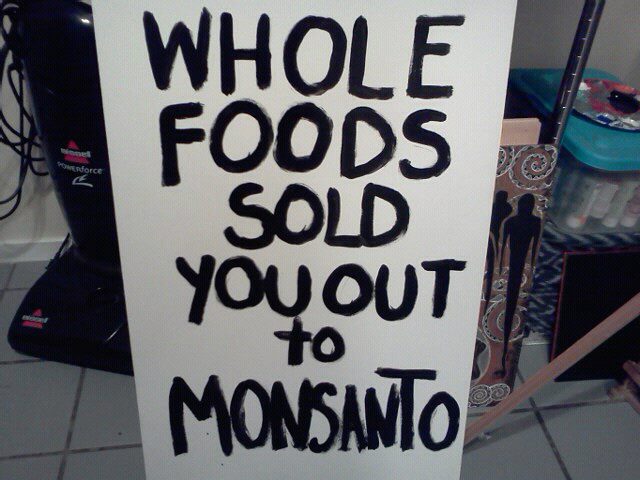 The police showed up but after hearing her story they allowed her to continue protesting and educating people about this situation.

Monsanto is slowly but surely destroying the natural nature of things in our food biology.

I'm hoping this becomes viral and more people will protest.

edit on 1-2-2012 by kbriggss because: MODS move to appropriate, thanks

posted on Feb, 1 2012 @ 06:46 AM
link
Reason i never file w2 nor will i ever no matter what the consequences---
Even trade since Im forced into the genetic experiments with tricky legal consent forms. You know all those forms we think we know what it says but really dont.

Star and flag for the thread, and for knowing someone dedicated enough to make some noise about what they believe in.

posted on Feb, 1 2012 @ 06:58 AM
link
I am so thankful I have enough land to have my own garden, big enough to can and donate what I grow. I cannot believe anyone is heartless enough to sell out to Monsanto.

Jean Paul Zodeaux
+14 more
posted on Feb, 1 2012 @ 07:23 AM
link
Whole Foods Market has long been considered by many a fraudulent company anyway. Their recent marriage to Monsanto has been an enduring courtship and a long time coming.

Found to have be fraudulently labeled as Extra-Virgin: Whole Foods

Whole Food's of course offers their own defense:

Whole Foods Market is equally as susceptible to olive oil fraud as the rest of the industry; however, we perform rigorous testing on each batch of our olive oils to determine their pH level, peroxide value, UV extinction, fatty acid composition, sterol composition, triglyceride composition, wax content, and steroidal hydrocarbons to ensure it meets our requirements.

There is, however, this:

An employee of the Miami Beach Whole Foods store alleges that she was fired for reporting sewage that went uncleaned in the specialty cheese department. The federal Occupational Safety and Health Administration (OSHA) has sued Whole Foods for allegedly firing the employee for blowing the whistle on employers' wrongdoing.

At a Whole Foods Market in White Plains, N.Y., our shoppers paid $22.99 a pound for "red snapper" that our testing showed was actually vermilion snapper, a smaller, poorer cousin.

Nevertheless, Carrie Brownstein, Whole Foods' global seafood quality standards coordinator, told us that the company has its own seafood facilities where its buyers see the species received first-hand. "Since the buyers are experts at species identification, this makes us less vulnerable than competitors to species substitution," she says, adding that the company is also working to ensure the traceability of seafood from the fishery or farm to its stores.

Originally posted by chiefsmom
I am so thankful I have enough land to have my own garden, big enough to can and donate what I grow. I cannot believe anyone is heartless enough to sell out to Monsanto.

I'll NEVER darken the door of a Whole Foods store. What hypocrites.


First off let me say that I have long been a rather vocal opponent to Monsanto, whom I believe to be one of if not THE most evil, vile and disgusting corporation on the planet. I have boycotted their products and products produced by any of their subsidiaries for decades. While my own little piece of the "American Dream" is tended in an organic manner (which means not just my food gardens but my flower gardens and lawn too), that does not mean that my neighbors share the same practice and who knows what contaminates my space in the form of airborne particulates or rain water. So really, how organic are we really? That being said, let's not forget that just as Monsanto has their agenda, so does the whole 'green' movement. While I fully expect to be duped by our current Government, the betrayal that hurts the most comes from the movement I have do vehemently defended since I was in high school which was a rather long time ago, trust me.

JPZ has, as per his usual, pointed out in a very well done post just how "honest" Whole Foods Market really is. Again... they have their agenda as well obviously. But here I would also like to point out that the "green" media is just as guilty of being less than honest. While I was reading the linked source from "Fit Nation" I was thinking to myself "Wow, this sounds exactly like an article I read last year". With that I was off to my desktop folder I have labled as "Evil Monsanto" to rifle through articles and such I've saved that I found of interest. Low and behold...indeed...this is an article that was posted in the Huffington Post in January 2011.

Now, what bothers me is NOT that the information is being presented again to a new group of folks that may not have seen it last year. This is what needs to be done when an issue seemingly drops off the radar. The information is just as relavent in 2012 as it was in 2011. However, I take great issue with "Fit Nation" for the following reason: They have flat out plagiarized the Huffington Post article originally written on 1/28/11 by Ronnie Cummings the Director, no less, of the Organic Consumers Association.

I have read 3x now, the article posted in the linked article of "Fit Nation" and I see no acknowledgement given to Mr. Cummings for his work on this issue. Indeed, at the end of the "Fit Nation" article it infact is signed "Drew", whom I can only assume is the "admin" that posted it in "Fit Nation" on 1/31/12. Please see below:

Power to the People! Not the Corporations!

We’re in this together,

This is what angers me about a movement that is rather near and dear to my heart. They can be at times just as sneaky and sly as the very organizations they cry foul against so hard. Seems a bit hypocritical to me, to demand honesty and transparency only to fall victim to the very same thing they are demanding of others. It discredits the whole movement, in my opinion. But then again... just as Whole Foods, USDA, Monsanto and the rest... they have their agenda too. Shame on "Fit Nation" and the supposed 'author' of this article. Just my 2 cents.

I suggest that we put our support behind it.

I stopped dealing with Whole Foods years ago when I discovered the trout that I was about to purchase had been farm raised in China. Organic, my ass.


Have you ever noticed the waste within that company and their individual markets? It is an absolute sin to overstock fresh food for appearance sake then throw it away. They have little to no regard for their employees either.


We really should be supporting our local farmers. The local You Pick It is a good choice for those that don't have garden space.

For those that say that it is too expensive, I have to copy what I heard the rep from "Startpage.com" say the other day.

"What are you willing to pay for your freedom?"

posted on Feb, 1 2012 @ 08:52 AM
link
When President Reagan stepped into office the country was bankrupt.

To keep us going he set up little Trust Funds for each Federal Agency and put a little money in them. He said to go out and invest it to have money to operate on/ pay your retiree's.

The Federal Agencies take their Trust Funds and go out and invest...Monsanto is one of those companies they own/invest in. They have the power to force Monsanto down our throats.

Either we pay 90% of our income for Federal Taxes to be able to pay allll the Baby Boomer military retirees....all the Baby Boomer Social Security/Medicare..........or we have evil companies like Monsanto doing their evil methods to generate revenue to pay the Federal Liabilities...

Do you understand the Federal Government 'owes' 1/3rd of America (Baby Boomers) all that they promised themselves?

They don't care if they poison or kill the generations younger than them. They are the real "ME" generation...and they are why Monsanto exists.
edit on 1-2-2012 by Pervius because: (no reason given)

posted on Feb, 1 2012 @ 08:57 AM
link
Quite disappointing.
You know you're not in a free country when they can force you to carry a corrupt corporation's product.


It was and still is a Chemical company. People are just caught up on GMOs still for some reason.


Organic Food Farmers are all lying. They jack up their prices but are really lying using GMO's. They cheat and steal..

This is one baby boomers willing to opt out.

Just give me back all of the money I paid into Social Security and Medicare. You can have what I have paid in taxes all these years.

I can't take back my time that I put in serving my country, but I don't think it is too much to ask for a little medical care for compensation, especially when many of the medical conditions are resulted from war related conditions.

Don't worry we won't be around much longer. Our time is just about out. I am glad too. I am sure you brilliant whiz kids will do a wonderful job of running this world.

Just one correction. We were not the me generation. You still have that generation running strong, but I don't think that they are going to be a problem for you. Just don't ask them to do any real labor.

It seems you young folks think you are entitled to a lot. It doesn't' seem to matter that what you think you deserve was paid for by someone else's blood sweat and tears.

Well you're up now. Show us old, greedy farts how it should be done.
I am rooting for you.


I'm sure this isn't new news but it was for me and my friend that protested.

What's crazy is that she just decided to go and do this on her own. No one else.

Now if everyone took it upon themselves to voice their thoughts and reactions to corrupt systems / corporations
we would be living in a different world.


Are you advocating for GMO's?

Yes Monsanto was originally a chemical company that now feeds us the poison.

Opinions wanted:
Are local Food Co-Ops any better? We have two Whole Foods locations in Ann Arbor, and also a food co-op downtown. There's also a food co-op in the next town over. We also have a local farmer's market in the "Kerrytown" area downtown.


Personally, I would give my business to those that have the least amount of overhead to support.


I try to be "local". Local coffee shop, not Starbuck's. Corner party shop, not the BP or Speedway, etc. Going "local" - that's a good point. I'll put that in the plus column for shopping at the co-ops and the like.