posted on Jan, 4 2012 @ 04:32 AM
link
Intriguing UFO case from Flora, Mississippi in 1977 where two policemen reported a strange object hovering over their patrol car, it states in the article that other town residents and police officers also witnessed the object and it was described by one of the officers as being perfectly round, 40 feet in diameter and having 'little windows giving out light which changed colors from blue to red to green' -other than the posted articles, couldn't realy find out much more about the case but it does state that researcher Patrick Frascogna has launched a new investigation so if anyone has any further info please feel free to post.

One of the most famous UFO sightings in the world happened in Mississippi.

On Feb. 10, 1977, nearly two dozen law enforcement officers witnessed a giant floating object above the tree line in a cotton field off a rural Madison County road near Flora.

A former deputy who said he saw the UFO told his story to WAPT's Darren Dedo. The deputy wanted his identity to be protected, so for the story, Dedo called him Joe.

"I'll tell you what though, most of them around here, you don't realize how many people have had a close encounter with what this is," Joe said. "It was approximately 15 to 18 feet off the ground, blue in color, kind of metallic blue, portholes around the center of it, shaped like an old spinning top kids use to use."

Although it states in one of the articles that nearly two dozen law enforcement officers were involved in the sightings including Constable James Luke, Deputy Charles Bowering and Highway Patrolmen Joe Chandler and Louis Younger, the focus (and national attention) of the case seemed to fall solely on police eye-witness Deputy Kenneth Creel, his full account is found below although it also mentions the officer was flooded with crank calls and regretted ever reporting the object -at the video link there's also a recent news report which contains claims of story fabrication, government intimidation and threats to his safety. 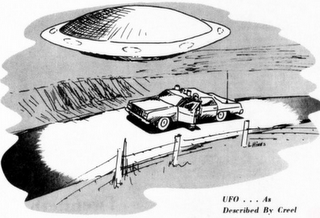 Since he reported the incident to the Mississippi Highway Patrol that evening last week however, Creel has now found even more national attention focused on himself.

"I know I'm not crazy .. I've always said I didn't believe in this stuff," said Creel. "I don't know what I saw, but I know I saw something . . It's just hard to describe what happened."

Deputy Creel first saw the object while driving down the Smith School Road four miles west of Flora, near the county line. He was with Constable James Luke at the time.

"It looked like an evening star or something," said Creel, "but it kept getting brighter and bigger."

Then, when the shape of the object began to form, Creel said he contacted the Mississippi Highway Patrol with his car radio equipment.

"I kind of thought it was an airplane flying low, or like it could have been."

But when the strange object came within "about 200 yards" of his car—"out across the field"—then, Creel said, "I stopped and cut my engine and my lights to listen."

What he heard was a whirring noise—"like a blender . . Like it was straining, when you first put ice in it"—and then the UFO started coming closer.

"The thing came right over the car," said Creel. "It came right to us, like it was being piloted."

How "the thing" got there is another question, because Creel says he could not tell if anything or anyone was inside.

"The thing just hovered over us, about 20 or 30 feet up, for more than a minute," said Creel, who at this time was looking straight up, from his patrol car window.

According to Deputy Creel, there was little way to tell much about the craft. "There was light coming out from little windows," he said. And the light apparently changed colors several times, from soft blue to red to green and other colors.

The UFO was reportedly about 30 to 40 feet in diameter, and perfectly round. "It didn't spin or anything. It just hoovered around there."

After about a minute, Creel began backing up his patrol car "about 100 yards, to a place where I could turn around."

By this time, however, Highway Patrolman Louis Younger drove up in his patrol car within a short distance of the UFO, and reported seeing the same object—with the same description Creel had given.

"Then the thing just picked up and took off, north west, toward Satartia."

An unidentified object of the same general description was reported the same evening by other Flora residents, and Deputy Charles Bowering and Highway Patrolman Joe Chandler and others said they saw lights from an unidentified craft "from a distance."

Dedo spoke with Kenny Creel about the UFO he supposedly saw some 34 years ago. He didn't want to go on camera, but he did tell Dedo by phone that he actually made the whole thing up -- that it was some kind of a joke. But, others aren't so sure about that.

Joe believes Kenny Creel clammed up after the "feds" put the heat on him.

"The CIA told him that he didn't need to talk about it no more," Joe said. "They didn't want it out. I'm not sure what kind of threats were made."


Hi Karl , another interesting case
My first thought was this sounded like something straight out of Close Encounters of the Third Kind and maybe that had something to do with the sighting ,given the film was released in 77 , but this incident happened before the Nov 77 release of the film so I guess not .

The corroborating testimony of Patrolman Louis Younger is a bonus , it would be good to know if these reports were made officially and if statements were taken from the officers at the time , maybe the new investigation by Mr Frascogna will bring them to light if they exist .

I would also be interested to know if Deputy Kenneth Creel had any after effects of the encounter as he states that "The thing just hovered over us, about 20 or 30 feet up, for more than a minute," .

All in all an interesting case , I will have a dig a bit latter .
S+F

There maybe remaining trace evidence on the ground according to Pat Frascogna .


His investigation has lead him to two patches of earth where plants no longer grow. Each patch is roughly circular and approximately fifteen feet in diameter. Both of these patches, very near each other, are devoid of plant life.
Mr. Frascogna has sent soil samples to one of the universities in the state of Mississippi in hopes of finding some sort of anomaly in the soil that might explain the lack of growth. He also continues to search for witnesses, in hopes of learning everything he can.

Originally posted by gortex
My first thought was this sounded like something straight out of Close Encounters of the Third Kind and maybe that had something to do with the sighting ,given the film was released in 77 , but this incident happened before the Nov 77 release of the film so I guess not...

There maybe remaining trace evidence on the ground according to Pat Frascogna..

Gortex, great post mate (and great find) -you make a good point about the Spielberg film and it seems police UFO encounters aren´t that uncommon as it´s said this 1966 case inspired the script (not the other way round) -as for Pat Fracogna, you´ve certainly got to hand it to him as it states in the clip you posted that he´s been researching the Flora incident for the last sixteen years and is still going, good job he did else we wouldn´t have known about the possible trace evidence aspects of the case - did like this little poster of his on the Mississippi UFO Conference website. 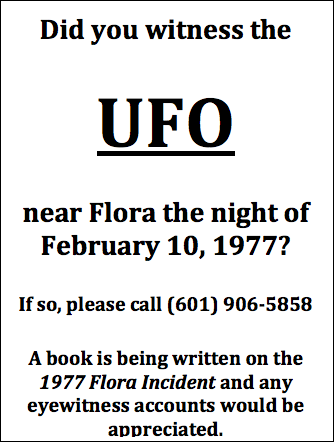 Will go through APRO / MUFON / Keyhoe archives to see if there´s any further information on the witness testimonies or similar reports from the same time or location- there was this NICAP report from Arizona on the same day with multiple witnesses but it gives a different object description.

7:30 PM. From a window in her house Ms. Lois Stovall saw a luminous object in the sky approach her house from the north. She and her grandmother, Mrs. Alice Buckner, went out to the yard for a better view and saw it hovering over a small tree less than 50 feet away. It was capsule shaped with a cylindrical vertical axis, and transparent on the side facing them with dark vertical bars..

I always love these eye witness testimonys from Police, Military and Gov't workers. It leads to some credible sources (or at least I assume credible). This is a interesting story none the less.

The craft must have been pretty low for them to see windows and to accuratly know what color those lights are.

I always love these eye witness testimonys from Police, Military and Gov't workers. It leads to some credible sources (or at least I assume credible). .

SloAnPainful, thanks for the reply mate and there´s an interesting article here about the comparative credibility and reliability of police UFO witnesses (although I suppose they are just normal people at the end of the day). Can´t seem to find any more info about the Flora case anywhere, let´s hope Patrick Frascogna ongoing research brings up new data.
Cheers.

posted on Mar, 16 2012 @ 12:57 PM
link
I was in high school when this happened, interested in UFOs, living one town away from where this happened, and had not heard of it until a year ago. This is not a well known case.

In the linked video, the primary witness now says it was a joke. The anonymous informant claims he was silenced by the Government, maybe the CIA. This sounds like a copycat case to me. You've got to remember the time frame. National Enquirer was promoting UFO stories and had a cash prize for the year's best. The Betty Hill story was on TV, Travis Walton was in the news, and a few years earlier there was the famous Pascagoula abduction in Mississippi. If the prime witness says its a joke and there's no photos or physical evidence...

Here's more on the news coverage from the week following the sighting
(about halfway down the page)
Kenneth Creel UFO Sighting
edit on 16-3-2012 by CardDown because: added link