posted on Dec, 21 2011 @ 01:13 PM
link
I don't know what we're looking at here.
At first I thought perspective differences, then time of day shadow changes, then JPEG artifacts, but none of those seem to be sitting well with me.

Ever play the game with the 2 similar photos that have a few differences you're suppose to find? These Mars Rover images are kind of like that.

I cropped the areas but did not alter the images otherwise... 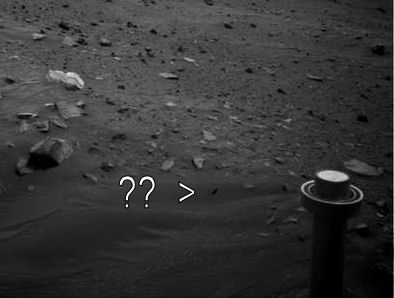 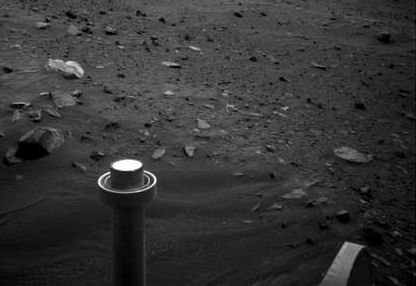 
And then there's the moving rock/object/shadow/lifeform... 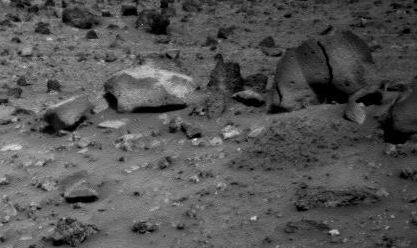 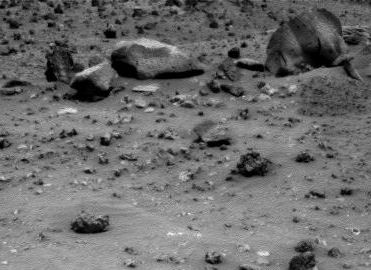 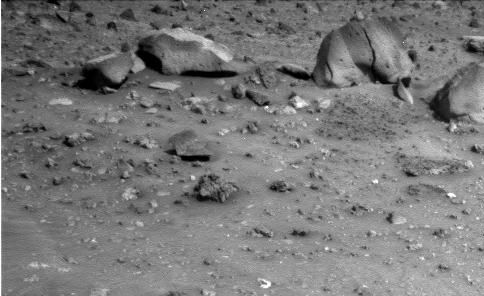 
A NASA conspiracy thread is never fully complete without a Youtube video to go with the photos...


So what do you think we're seeing here?

To me that's most logical conclusion.

The "legs" are probably pixelation. It is YouTube afterall, who are not known for image clarity.

You might want to try to make an animated .gif so it's easier to see. That is, if you know how.
edit on 12/21/2011 by CastleMadeOfSand because: (no reason given)


Definitely not dust that size in the bottom 3 photos.
And no I don't know how to make animated gifs of these, just layering images is about all I can do that's fancy.

Youtube has nothing to do with the original NASA images, this guy is just pointing out what he saw when zoomed in, but yeah probably pixels. I'm not thinking these are lifeforms, just don't know what they are.

The second set of images are really perplexing, have these been discussed on ATS prior? That is the most compelling Mars anomaly I've seen. S and if I could flag I would!


Oh, ok. Now I see the object in question on the three photos. That I cannot explain. It certainly looks like a rock, but it does seem to have moved. I seriously doubt wind could move a rock that size (unless it's a pumice like rock).

It does not resemble a shadow as far as I can tell.

Originally posted by JibbyJedi
So what do you think we're seeing here?

You're also seeing rocks and other things obscured when the camera angle changes. Sometimes the angle changes quite a lot more than it would first seem.


Very interesting Jibby. Thanks for taking the effort to put this little thread together.

At first I thought "Well it is from a different camera perspective" - Yet obviously by looking at it twice I realized that the little black space bug clearly vanished from the second picture.

Maybe THIS is where scarabs came from. And this is why the Egyptians revered them. Because in truth, they are actually Martian cockroaches.

The rock is odd to me though - looks a tad photo shopped. I don't have the tools to prove that, of course.

All I can really say is that the first anomaly does not appear to be a "speck on the camera".

posted on Dec, 21 2011 @ 01:46 PM
link
The first pair of images were taken at exactly the same time, they are a stereo pair and the timestamp is contained in the file name. The first is from the left camera, the second from the right camera. It would appear to be a speck of dust on the lens.

The second pair of images were taken from different locations and are discussed here.
www.abovetopsecret.com...
edit on 12/21/2011 by Phage because: (no reason given)


Thanks for that link Phage. I had not even heard about that case, will bookmark for later.

Yes, left down to that. A speck of dust or a Martian cockroach. Looking just to the right of the object in question is an almost identical "little black rock". Though dust can resemble little black rocks, it however seems like they are both the same type of object.


I dont know about the 1st one, maybe dust on the lens?

The 2nd one is just a change in perspective.
The rover has moved quite a significant distance (to the left) and the object in question is actually quite far behind the other reference objects, on a downward slope.
As the rover moves left, the far away object appears to move in relation to the nearer reference objects.

You can see how much the position of the rover has changed by looking at the front of the big cracked rock on the right, there's a jagged projection at the front of it, which points "towards" the rover in the first photo, but points way to the right in the later photo.

We know of galloping rocks and boulders here on this planet that have been explained away by a hundred 'experts' with a hundred different theories.

It's a very good subject for discussion. Unfortunately, we're at the mercy of NASA/JPL for details and those guys pretend like we don't pay their salary.

Theory and conjecture is the best we can do until someone, someday has the stones to commit to a manned mission.

posted on Dec, 21 2011 @ 01:57 PM
link
The rock pictures have differing angles, and there is a slope behind the rocks, as a poster said It would be easier understanding with movement. The first picture could be a picture artifact, dirt or a emulsion mark.


Ah, I see it appears to be at the bottom of a small slope, which could hide it in the other similar photos. Makes more sense to me now.

The thing in the other 2 photos seems to be a little large for a dust particle. We are at the "could be this, could be that" stuff again.

posted on Dec, 21 2011 @ 01:59 PM
link
I'm a photographer by trade, so I always scrutinize these kinds of photos when they pop up, there are some that aren't explainable by my experience, but I'm convinced that this isn't anything special.

My hypothesis: The first photos of the 'insect' are nothing more than dust on the lens of the camera. They're completely black with no depth or definition which would show up on cameras of this quality. Just look at some of the objects of similar size around it. They HAVE depth and definition AND a shadow.

As for the last three, the person who made the video gave it away when he was explaining it and it's a rather simple explanation; the point of view changed the perspective of the camera and the rock (or 'alien' or whatever he thought it was) simply moved just outside the frame.

That's my observation. Not saying it's what happened but it's a possibility.

So is this: Sailing Stones

Anyone have other explanations?

Yes, left down to that. A speck of dust or a Martian cockroach. Looking just to the right of the object in question is an almost identical "little black rock". Though dust can resemble little black rocks, it however seems like they are both the same type of object.


NASA would be the first to headline that and show how much more funding NASA need to go explore these "insects" .


I see no insects in the pics of the vids .