page: 1
66
<<   2  3  4 >>
log in
join
share:
1AnunnakiBastard
+47 more
posted on Dec, 20 2011 @ 10:17 AM
link
Cats were largely worshiped in the ancient Egypt and regarded as "keepers of the underworld". Gnostic scriptures give account that these creatures have formidable humanoid-like and very powerful elemental (kind of animal soul). In modern times many people who live with and like to observe felines, know they actually have very sharp minds, cognitive intelligence and mainly very strong perception of the astral dimension.
Though most people ignore or just mock metaphysics subjects, cats have something special and rare that make them powerful psychics. I've picked two impressive videos that might perfectly illustrate what I'm talking about:

The first is an old video but servers for the purpose as we see how the cat clearly imposes his mind will over TWO, not one but TWO alligators and scares them away. The second video shows a cat applying its psychic skills over an uneasy baby and quickly makes him/her sleep.

Who knows what else they are capable for, mainly when people are not around and in what evolution phase they are?? Not talking about Darwinian evolution here. I'm talking about the kind of metaphysics evolution that drives creatures toward human existence.


Btw... i do think the cat in the second vid is just eager to play... you see him watch the hands of the baby, and one time it looks like its going to bite the head... pretty scary!

posted on Dec, 20 2011 @ 10:36 AM
link
Well, i think im going to have to be a bit nicer to my cat from now on.... On a side note, my grey tabby owns my house. When my beagle sees the cat, the dog runs and hides. If thats not enough, my mother inlaw has a blue healer black lab mix that is also scared crapless of my cat. But with us, and my 2 year old he is the most gentle cat ever.

But, the behavior of the cat in the second video, has nothing to do with intentionally putting the baby to sleep. It is typical play behavior of cats. You notice, kitty is first drawn to the baby's hand motion. The interaction begins after that. The paw on the head, is how a cat shows dominance over an opponent.

I would guess the baby is really tired to begin with, thus cranky. The warmth of the paw, plus the reassurance of contact, was soothing to the baby. Viola sleepy time.

ETA: I think this cat is psychically telling this dog something like....I wouldn't do that if I were you.....

posted on Dec, 20 2011 @ 10:43 AM
link
Haha my cat is not the brightest crayon in the box, so psychic powers? I'm not so sure about that, Mind you she is staring at me right now kind of funny.. almost like she knows I said she wasn't bright...

It is an iteresting thought though. And I guess you never know, maybe one day my cat will surprise me.

posted on Dec, 20 2011 @ 10:43 AM
link
love cats and believe theres ''something'' about them, but the second video is nothing special. My daughter used to self sooth eventually like that when she was that age. The cat was likely drawn to the pitch of the cry because it's the same pitch as a kittens cry. Also I hope the cat was declawed for the parents to let it paw at the baby (gentle though it was) Aside from my critique...nice article

Originally posted by Grifter81
I don't dislike cats but I wouldn't trust one near my baby like that. Claws are sharp!


This shows a HIGH level of intelligence. The cat is clearly engaging in behavior that IT KNOWS is outside of what humans BELIEVE that they can do. As soon as the cat is caught red-handed, it goes back to its normal "meow," and then begins wagging its tail back and forth as if its trying to correct the mistake it had made.

Sorry, I guess putting the youtube vid up here didn't work, so, I posted the link instead...


I agree with you. I have owned tons of pets, from cats and dogs to birds and snakes, most people wouldnt trust a snake with a baby so what's different with a cat? No offence to anyone but an animal is an animal ,and they all have the ability to harm someone even unintentionally


I wouldn't trust someone who has a fear of cats having ulterior motives with children. Anyone who doesn't trust animals, are NOT to be trusted themselves...

I've had cats all of my adult life and at the moment have 7. I would never trust my cat(s) (or dog) or any other cat left alone with a baby. Even a cat who just wants to play can hurt a baby.

muzzleflash
+13 more
posted on Dec, 20 2011 @ 11:05 AM
link
If cats are so psychic why do they get run over by cars so often? Are they committing suicide or something?

Also in the video with the alligators there must be something about the gators we don't know, perhaps they are already quite docile for some reason?

I mean look people were walking right up within striking range of them, which would be very foolish unless there is something wrong with them that we don't know about since the video doesn't exactly give us the full context.

The Arbiter of Lies

posted on Dec, 20 2011 @ 11:06 AM
link
i have two cats and two dogs the cats are 12 years old and are completly BOSS they beat up my dogs all the time and my dogs are wolf husky cross so cats for the win and the dogs arent puppys they are full grown so its even funnyer

posted on Dec, 20 2011 @ 11:06 AM
link
Cats are soooooo weird..... I always say that.. they do weird things for no reason... Their meow makes you react they know it bugs you... They purr, run around the house for NO reason and my cat knows when im about to leave the room and tries to beat me where im going so he doesn't get locked out...


Originally posted by Grifter81
I don't dislike cats but I wouldn't trust one near my baby like that. Claws are sharp!

So I'm not to be trusted because I wouldn't let a cat paw my newborn? We got our cat re-homed when it started being aggressive toward my baby son. Not on my watch I'm afraid!

The story is that apparently a couple in France has a small window, high off the floor, in their appartment, and outside were some birds. Their cat wanted to see the birds. One can barely hear them in the video. So he just stood up and watched them.


Well anyone who has read my posts knows I love cats....but that second video scares me. The cat wasn't "soothing" the baby, he was reacting to the stimulation of the baby crying, and could very easily scratched the baby (as shown by the "mouthing" on the baby's head) Those parents were lucky. Cats are sensitive and loving, but they are still animals, and must be respected as such. I learned this the hard way. My sweet boy "Smoochy", who I bottle feed as an abandoned kitten put me in the hospital once! He is VERY sweet natured and is strictly an indoor cat....but before I got him nuetered, he got outside and quickly came across another male cat. The other male cat had him cornered (during mating season) and they were about to fight.....my "motherly" instinct kicked in, and I tried to "save" him from being hurt by the other cat. I stupidly reached out to grab him (thinking he would be grateful to have me protect him).....and he visciously ATTACKED ME....all teeth and claws. He ripped my hand and leg open (and I mean he SLASHED me!) and I got a bad infection...spent 4 days in the hospital! Most people said "I would have left his a** OUT or killed him!!!". But NO....it was MY mistake for projecting human emotions onto an animal. He WANTED to fight, to claim his territory, and those instincts overide any affection he felt for me. He finally came back in, and I swiftly had him neutered He has never shown aggression since then. Moral of this story: You can NEVER 100% trust an animal, no matter how well you know him, because their primary instincts will always be there, and cats are predators.

Here's a pic of Smoochy....could you imagine that this sweety is the one who almost killed me? I treat him with the utmost respect now He did nothing wrong...I did. 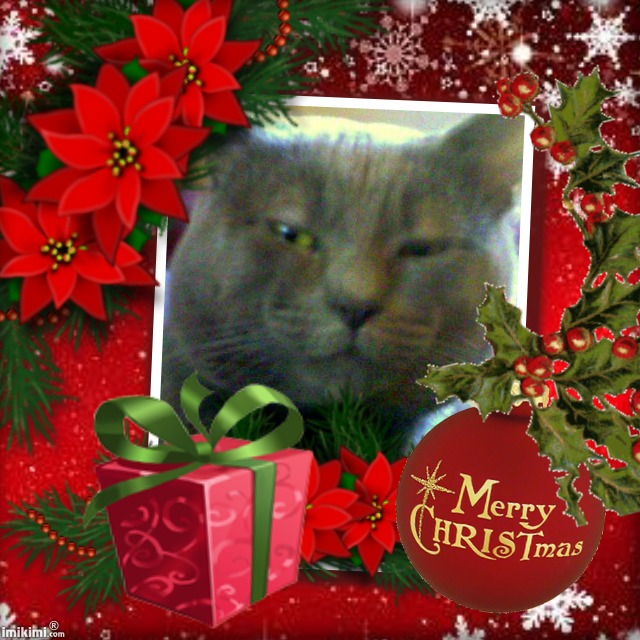 Originally posted by Destiny777
reply to post by Destinyone


When you have 61 years of *personal* experience....and a few children, we can readdress your statement.

Until then, I stand by my personal experience.

A newborn baby depends on a responsible adult to keep them safe. Unlimited trust in any animal with a newborn, is not being responsible. JMOHO.
edit on 20-12-2011 by Destinyone because: (no reason given)