"If you are occupying areas inhabited by... Palestinians who do not have the same rights as the Israelis in Israel, that is apartheid and that is not sustainable," he told reporters.

"I think that the majority in Israel has also realised this but they have been unable to provide a leadership that (can) move forward on the two-state solution," he added.

This is not necassarily my opinion, but that of the Finnish foreign minister. Given the definition of Apartheid

A policy or system of segregation or discrimination on grounds of race.

It is not suprising that some have come to the conclusion that the occupation is reminiscent of the South African Apartheid state. This may not be a conclusion I have come to, but many others certaintly have.

posted on Dec, 17 2011 @ 03:55 AM
link
It's good to hear officials stating the truth, although it's been stated before by others, who soon after find themselves in uncomfortable circumstances. So how long do we give before Mr Tuomioja is outed as a fraudster, or cheated on his wife, or described as a conspiracy nutjob who claims to be in touch with aliens, or some other heinious crime which means we never hear from him again.

Nobody can speak openly against the zionist regime without being retired early.


Well, lately there’s an unprecedented wave of rapes committed by Muslims in Norway.
While trying to hide their true origins, guess where the fingers are pointed at? That's right, Israel.
Or as the Norwegian justice minister said: “ “Israel must be glad to hear about it.”

And here is Sweden: “Muslim rape wave in Sweden”

'Muslims "find refuge" in Finland, and work on promoting sharia'

How about Denmark? 'Denmark: Increase in hate crimes'

Oh yeah, Israel should be taught by the enlightened Scandinavians how to treat Muslims, or as I would have put it: who gives a damn what the Finn think.

Today, within Israel, Jews are a majority, but the Arab minority are full citizens who enjoy equal rights. Arabs are represented in the Knesset, and have served in the Cabinet, high-level foreign ministry posts and on the Supreme Court. (e.g., Ambassador to Finland)

Under apartheid, black South Africans could not vote and were not citizens of the country in which they formed the overwhelming majority of the population.

Laws dictated where they could live, work and travel. And, in South Africa, the government killed blacks who protested against its policies. By contrast, Israel allows freedom of movement, assembly and speech. Some of the government's harshest critics are Israeli Arabs who are members of the Knesset.

You might like to investigate the treatment of Palestinians in Jordan for contrast!
edit on 17-12-2011 by JohhnyBGood because: (no reason given)

Originally posted by gravitational
who gives a damn what the Finn think.

Originally posted by hmdphantom
reply to post by gravitational


Wow, you condemn bigotry and then say bigotry in your next sentance. Hypocrit much?

posted on Dec, 17 2011 @ 02:25 PM
link
Thanks for posting, which i have flagged.
I can`t Star your comment as we have different opinions on Aparthied.
I certainly think the Palestinans are the victims of Aparthied and the Western Media should hang their heads in shame for not reporting this shameful issue to the masses.

Originally posted by hmdphantom
reply to post by lonewolf19792000

Yeah but you go on about how the U.S. brings this to the middle east when no one ever sanctioned that animal to do any of that. he did that of his own free will. That kind of stuff happened before the U.S. ever set foot there except it was those countries own animals doing it as opposed to a U.S. animal. Saddam? Yeah he dumped chemical weapons on his own people. Assad? Look what he is doing to his people. This is not anything that is intrinsic in nature to any specific set of people. Man is evil plain and simple and this is nothing new because this type of thing has been going on for thousands of years except it went on everyday and it was everywhere and not just one monster doing it.

No one is innocent in this world, i can walk out on a street in any city or township in the world and point at someone and they have done some kind of evil. Lies, deceit, hate, murder, abortion,selfishness, sexual immorality, adultery,rape, lust,greed,avarice. Mankind is evil plain and simple which is why God is going to burn this world to ash in the end and start over but thats a whole different topic. My point is, this world is a prison for the guilty and theres no such thing as innocence unless theyre babies. We have guilty people killing guilty people. Even i am guilty of things as i have lied and committed sexual immoralites and engaged in drunkeness, drugs and debauchery too.


Is that what the schools in Iran teach?

I think this massacre happened before Israel was officially Israel?

The Deir Yassin massacre took place on April 9, 1948, when around 120 fighters from the Irgun Zevai Leumi and Lohamei Herut Israel Zionist paramilitary groups attacked Deir Yassin near Jerusalem, a Palestinian-Arab village of roughly 600 people.[1] The assault occurred as Jewish militia sought to relieve the blockade of Jerusalem during the civil war that preceded the end of British rule in Palestine.[2]

Around 107 villagers were killed during and after the battle for the village, including women and children—some were shot, while others died when hand grenades were thrown into their homes.[3] Several villagers were taken prisoner and may have been killed after being paraded through the streets of West Jerusalem, though accounts vary.[4] Four of the attackers died, with around 35 injured.[5] The killings were condemned by the leadership of the Haganah—the Jewish community's main paramilitary force—and by the area's two chief rabbis. The Jewish Agency for Israel sent Jordan's King Abdullah a letter of apology, which he rebuffed.[2]


Sixty years on, the true story of the slaughter of Palestinians at Deir Yassin may finally come out ...

It is an interesting irony that the patients at Kfar Shaul recuperate from such variations on amnesia on the very spot that Israel has sought to erase from its collective memory.

The place is Deir Yassin. An Arab village cleared out in 1948 by Jewish forces in a brutal battle just weeks before Israel was formed, Deir Yassin has come to symbolise perhaps more than anywhere else the Palestinian sense of dispossession.

Sixty-two years on, what really happened at Deir Yassin on 9 April remains obscured by lies, exaggerations and contradictions. Now Ha'aretz, a liberal Israeli newspaper, is seeking to crack open the mystery by petitioning Israel's High Court of Justice to release written and photographic evidence buried deep in military archives. Palestinian survivors of Deir Yassin, a village of around 400 inhabitants, claim the Jews committed a wholesale massacre there, spurring Palestinians to flee in the thousands, and undermining the long-held Israeli narrative that they left of their own accord....


A massacre of arabs masked by a state of national amnesia


Deir Yasin massacre was the incident that made these people who we see as refugees.

There was a big fear among those people , so they left their home and became refugees.


I see how US used to pet these animals on the back , Saddam was once one of the US puppets in the region.

When that lunatic invaded Iran , he was thinking Iran is very weak after Islamic revolution . As he was saying " we will take over Iran in three days ".

He was a lunatic who was helped in US coup against Umar al bakr to serve US purposes and to stand against USSR.

I already have made a thread about he was being helped with WMD from several superpowers to win the war. 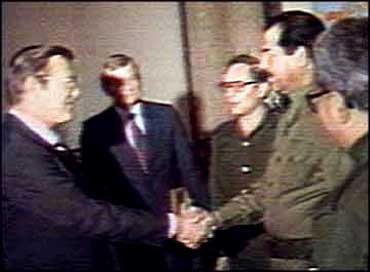 I know that we all do evil things , but after we understand that we just apologize and correct our behavior. There is the difference between Human and animal. We understand , we appologize , we correct ourselves. but animals don't.

+ evil things we do every day , I don't want to name. But I just refuse to kill , refuse to rape , under any circumstances I refuse. Because I am not out control in any case.There are some borders and lines.

+ I know US govt has done evil things , but blame is not always on American people.

Even when we look at animals , we don't see them doing mass murder in million numbers like Hiroshima and Nagasaki.

This is a catastrophe.

Agent Orange , a catastrophe.
edit on 18/12/11 by hmdphantom because: (no reason given)