Amazing huge UFO next to Mercury decloaked by Sun Flare

Huge cloaked UFO next to Mercury on SECCHI HI1-A on 12/01/11, appears when a CME hits it! Go to SECCHI and record this before it disappears.

posted on Dec, 3 2011 @ 04:49 PM
link
could be an answer to if there is a moon there?But something large was seen there before and startled the scientific community .........this could be huge
look at this
en.wikipedia.org...'s_moon

I reckon that was a shield.

..and why not - there's a lot on Mercury to protect from solar flares:

posted on Dec, 3 2011 @ 05:07 PM
link
For once I am generally stunned is not pixels or camera flash it is an CME interacting with something next to mercury hats off to the Op

posted on Dec, 3 2011 @ 05:07 PM
link
All I can think of so far for a non e.t. explanation is that the item seems to be behind mercury and﻿ due to the planets reflective surface the cme could be reflecting an image from a ridge or mountain. I’m going to keep thinking about this 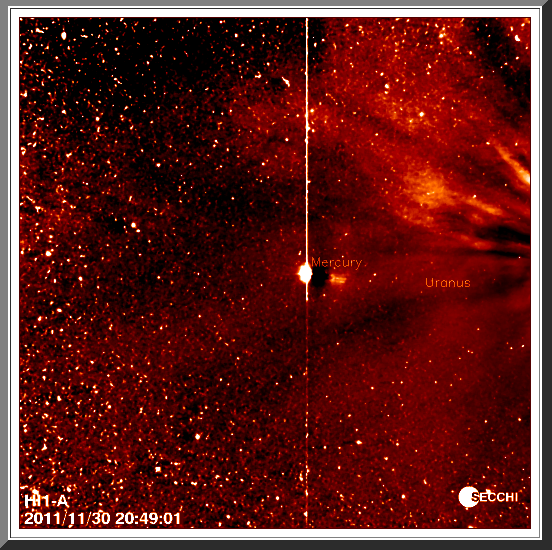 That's the only explanation. ;p

Droogie
+9 more
posted on Dec, 3 2011 @ 05:20 PM
link
I doubt that any of you has got any idea of what we're looking at. That's why you shouldn't jump to any conclusions whatsoever, because there are people around here that are very knowledgable regarding YT videos such as this.

I've seen a number of them explained in prosaic terms, and I'm sure this is one of them. Stupid people such as us, who don't know the we're looking at, shouldn't jump the gun by being convinced this is a UFO as big as mercury. Because, although we realize we're idiots, we don't believe this is necessarily a UFO.

It is interesting to see how it was transparent before the flare energy crossed it (you could see stars behind) and then became highlighted by the SECCHI spectroscopic equipment.

Anytime I see a video based on one of those devices, I wonder about the relative position of what is witnessed. For example the author of the video says

Relatively speaking, how is this close to Mercury? As seen on the linked video, it does appear to be near Mercury, but who's to say it is not on its way here or closer. The image appeared to be nearly as big as Mercury itself. Not to say that it's too big, In terms of UFO, who knows what too big is. but in a three dimensional system, the two bodies could be at opposing ends of the solar system and aligned in a way that makes it appear as though they are virtually side by side.

It is even difficult to gauge by the solar flare since those are omni directional and based on the video footage, we cannot derive an actual flare vector to help us find where this UFO is in space.

If it is not some monstrous mother ship, could it be some sort of dark energy such as a black hole or a brown dwarf or Nibiru? I don't know much about space bodies, so I'm just throwing stuff out there.

Therefor it must be a U de F de O and who are you do condemn people for calling it whatever they want and getting excited at that.

the first time you take your kid fishing and he catches a trout are you going to rain on his parade and tell him it no big deal?

Seriously. I think you're in denial and in your obscurium you must be so lonely that you want to dredge in a couple buddies.


Give me a break.. The thing is not there, but as soon as the solar flare hits, it's there?

Inquiring minds would like to know the lens flare theory.

That's what's you're going to call it, right?

It is the result of a process called background subtraction.
stereo.gsfc.nasa.gov...

posted on Dec, 3 2011 @ 05:37 PM
link
Nice find. Not a clue what that is unless Mercury does have a moon or something that no one has seen before which I find very unlikely. I don't have a clue. Interesting. I can't wait to see what some of our more experienced Astronomers have to say.