iphone 4 glows red hot, smokes then self combusts during flight

An Apple iPhone 4 was glowing red hot and emitted a "significant amount" of dense smoke as it spontaneously combusted onboard a flight in Australia in the second reported incident of its kind in the last month.

It's not the first time electronic devices have exploded or caught on fire. Numerous incidents have occurred over the past decade including Dell laptops catching on fire, a journalist's LG phone catching on fire and Sony Australia recalling 4300 laptops (440,000 globally) from its Vaio TZ series due to fears they could overheat, damaging the machines and potentially burning users.

The second incident, which Fairfax Media was made aware of by an anonymous reader, allegedly happened earlier this month on November 3 when their iPhone 3Gs (an earlier model) did something similar. The anonymous reader provided pictures as evidence.

Apple has been contacted for comment this morning but is yet to respond to the claims. 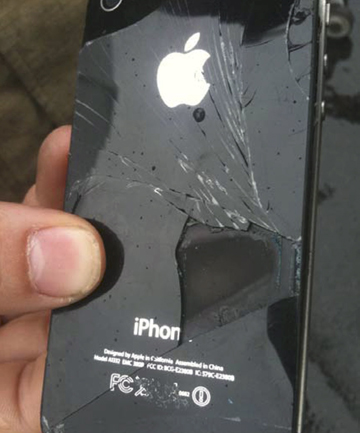 Thought i'd post this as a "Beware of iphone while flying" warning....

What if this happend whilst inside your lugguge and caused an uncontrollable fire in the over head compartment??

What if this happend in your pocket whilst asleep?
www.theage.com.au...

Saddly this is a standard problem with all LiPo battery devices. Although we humans allways claim that we can control nature (radiation, LiPo..) we can't really. Every day a LiPo battery explodes somewhere or at least destroys itself. My fathers MP3 player (a noname device) also popped up like a ballon. If a LiPo is exposed to air you have a desaster. Manufacturers tries several things to secure the battery with extra circuits to disconnect the battery if it gets hot and so on. But you can't garantee that this works for 100% and there is always a possibility that you get a small hole in the battery. Either through a manufacturing problem or if you drop the device or just because an atom makes use of quantum mechanics and vanish into another place (ok, this has a very little chance to occur )

So you better always take care of all your LiPo devices, never charge them when not at home, don't store them where it can be hot (in the sun inside your car) or go to bed with them.

ETA: Just remember all those incidents with the Nokia phones exploding while on the phone. There are several people out there with burn ears and at least one even died. So if your phone get hot please end the call...
edit on 29-11-2011 by UnixFE because: (no reason given)

This is pretty crazy!

I myself have an Iphone 3gs, lucky for me i don't travel via airplane much!

This would be enough reason for me to issue a recall.


rc car lipo fires happen with some frequency. check this out.


Good advice there, thanks

Surley this could bring a whole new class of terroist type bomb weapons to light?
Next they be banning cellphones from airplanes completely....


Wow... talk about your mission impossible this message will self destruct incident occuring.

Glowing red hot? What exactly is present in these things that can react to the extent of generating a massive amount of heat?


Wow thats crazy!
And So dangerous!
Thanks for posting


In the history of bad ideas, the "Smoking, Exploding Phone App" for the iPhone has to be the worst.

Seriously? Crazy stupid! Though I have an iphone as well.

Originally posted by subfab
rc car lipo fires happen with some frequency. check this out.

Over at the forums habited by radio control aircraft enthusiasts there are also many many stories of this nature that end badly. Houses burning down...etc...

The general rule is that LiPo batteries, although technically convenient, are bloody dangerous pieces of sh*t that can spontaneously catch fire for no real reason.
And sometimes when they go, as seen in the video, its like a magnesium flare and there is no way you are ever going to put it out.

Limit your ownership of them. Always be around when you charge them. Store them in a fireproof bunker.
But of course they're everywhere nowdays, so that last rule is ignored by everyone.

I for one will be glad when something better is invented and we've seen the last of them.

"My iPhone was expanding in size in terms of its width," the anonymous reader said. "[It] continued to grow in size. Before long the phone refused to even turn on and ... just expanded to what it looks like now."

The reader noted that - like others - their battery life "was rapidly shrinking after updating to the iOS5 .... so much so that it would go completely flat once I got to 30 per cent". Apple acknowledged battery life issues remained after another update.

The reader suspected there was a clear link between their upgrade to the iOS5 software and their battery "exploding".

It appears an upgrade is causing the problem...

Originally posted by grindhouzer
It appears an upgrade is causing the problem...


Maybe not.
One of the first symptoms of a sick LiPo battery is the reduced charge it will hold.
Ideally you should dispose of it then, but if not, later it can "puff" up in size, and maybe catch fire, possibly violently.

Happens all the time with radio control toys, so no reason to suspect that there is any software related reason.

Edit - that is to say, there may indeed be software reasons why battery life is short on those devices, but in this case I suspect its more due to physics/chemistry.

This incident is extremely rare and I have never personally witnessed it and can only deduce that the battery has developed an internal fault which causes a short. That is the only thing that would continously generate heat up to the extent described. Nothing else could glow that hot simply because it would fry the circuits long before the heat got that bad. I've seen them puff up before and burst the back off an ipod.

You've get better odds on that Aeroplane being hit by a meteorite than you have of this happening to your Iphone.
edit on 29-11-2011 by HobsonsChoice because: spelling

Firstly, could this be used as a reason to 'control' or even confiscate these devices for the duration of a flight to maintain safety..... I mean, there are ALOT of stupid people out there, especially on some RyanAir flights who seem to ''forget'' to turn their phones off....!!!

Secondly, maybe iPhones that have been 'tampered' or 'broken' to bypass legitimate purchases might be a cause of the malfunction in which case owners of 'Broken' phones would then become legally liable for any aircraft problems, disasters or the deaths of other passengers due tho their own negligence ?!!


there's an RC forum? cool! will look it up.

i'm just getting into ham radio, i'm guessing there is a ham radio forum.

back to the topic of lipo:
i have a couple of electric RC cars and have on hand a half dozen lipo batteries. i will take your advice and buy a fire proof box to store them in. i should have done it the day i bought the batteries.

my team associated buggy and traxxas slash 4x4 are fun little toys to mess with. do you know if anyone has ever done a side by side comparison between lipo and nickel batteries? everyone at the hobby shop said the lipo batteries were the way to go. but are they really? did i get fooled by marketing?

Originally posted by subfab
there's an RC forum? cool! will look it up.


Here's just one place to start...
The "Batteries and Chargers" section of rcgroups.
The first (sticky) thread is Lipo Fires Are Real!!!!

Originally posted by HobsonsChoice
You've get better odds on that Aeroplane being hit by a meteorite than you have of this happening to your Iphone.

Obviously this statement is false.

Planes have been flying for decades without being hit by meteorites. In fact such an event is expected to occur with a frequency of once every 59,000-77,000 years over the US where I do most of my flying. (source: www.dartmouth.edu/~chance/teaching_aids/books_articles/Cassidy.pdf )

The iPhone hasn't been around that long and yet this incident already happened on an airplane.

So by virtue of the fact that one has already happened and the other hasn't your statement is obviously false. You should probably stick to repairing phones and avoid making false statistical proclamations.

What if that incident had happened next to some flammable papers in the overhead compartment? Or worse yet in the baggage compartment where nobody was there to put out the fire?

Any battery can be dangerous if it has a large enough capacity and develops an internal short, as it can get quite hot. Laptop batteries are another concern. Just search for battery recalls.
edit on 29-11-2011 by Arbitrageur because: clarification

Originally posted by Arbitrageur
Or worse yet in the baggage compartment where nobody was there to put out the fire?


Then what happens next is the plane burns and crashes.

Lithium batteries are believed to have contributed to the cockpit fire that broke out in the UPS plane that crashed in Dubai earlier this month, crash investigation sources have said.

What if that incident had happened next to some flammable papers in the overhead compartment? Or worse yet in the baggage compartment where nobody was there to put out the fire?

I totally agree with you and too can't understand why LiPo is allowed on a plane if every other stuff is forbidden. Making a LiPo explode is quite easy if you help a bit. Allowing this stuff just shows me that all the other rules aren't for my safety or those creating these laws are rwally dumb.