posted on Nov, 26 2011 @ 10:38 AM
link
The ongoing saga of the effort to destroy recall petition signatures for the recall of Gov. Scott Walker: 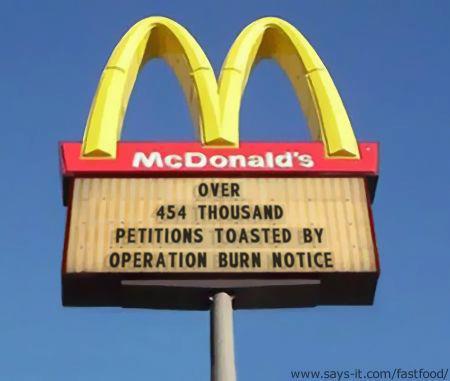 "We cannot allow democracy to be threatened by those who would illegally destroy recall petitions with valid signatures on them," Ross said. "We intend to keep the public informed about its rights during the signature gathering process and alert those who would engage in illegal conduct that they do so at their own peril."

A group of self-identified conservatives say they plan to sabotage the effort to recall Wisconsin GOP Gov. Scott Walker, which begins on Tuesday, by burning and shredding recall petitions they've collected and misleading Wisconsinites about the recall process.

These plans, discussed in Facebook posts that were first reported by the blog PolitiScoop, entail posing as recall supporters and gathering signatures, only to later destroy the petitions. They also include telling Wisconsinites that they can only sign one recall petition (which is false—they can sign different petitions as long as they each correspond to a different organization) and directing signature collectors to the homes of registered sex offenders. (Requests for comment were sent to each of the Facebook posters who allowed messages from other users.)

In one post, Will R. Jenkins says, "I'll be able to destroy 15-20K signatures." If things go well, he adds, he might even "be able to destroy upwards of 15-20% of the entire collected ballots in the state of Wisconsin"

Original story: Residents who signed legitimate recall petitions may never have them counted by the Government Accountability Board.

A Caledonia resident, who asked not to have his name used, told Caledonia Patch that he and at least two other people in Racine are collecting signatures to recall Scott Walker, but have no intention of turning them into the GAB. Instead, they want people to think they've signed the petition, but not actually have their signatures count.

They are doing this to sabotage the recall effort, the resident said.

“The Democrats put this out there and they made some mistakes,” the man said. “If you go to their Facebook page, you can download the petition from right there. I’m sure they are counting how many are being downloaded, but just because they are printed, don’t mean they’ll be used … It’s not illegal to collect them and not turn them in.”

This is the original article that first uncovered the plot;

Madison -- The kick off campaign to recall embattled governor Scott Walker kicks off in just four days and with that date approaching, the tea party has plans of its own. Politiscoop has received several screen shots of tea party and right wing activists planning to pass themselves off as those circulating petitions to recall the governor.

It has since been learned who was behind this effort - which still claim they are going to collect signatures and NOT turn them in (they backed down from the shredding claim) - these people have direct ties to the GOP and state militia.

You can see from the articles photo that Walker and "Wynns aka Leppered" had their photo taken together and that there was a fundraiser the group attended "Grazing with the Elephants" among other examples of ties to the GOP. Notably in attendance was Rebecca Kleefisch and Scott Fitzgerald, Alberta Darling and the list goes on.

Today we have new information that again brings another member from this group into the fold with ties to the Walker/ GOP machine. In the first article we mentioned a "Charles Atlas Shrugging" as it turns out, Shrugging’s real name is "Charles Brey" (As see in the above Photo with Rebecca Kleefisch).

If we go back in time to when the protests filled the capitol, you might remember the Tea Party planning to have a flash-mob to "Clean-up" the trash. That was another facebook "Event" much like the "Shred the petitions" event, however this time Charles Brey (Shrugging) appeared on "Fox and Friends" (video shown in middle of the blog) to boast about it. As it turned out, there was nothing for them to pick up and they immediately cancelled the event. This group was associated with the Crystal Lake branch of the tea party.

Walker Recall: Witness to a felony

With the four of us there, but only one behind the table, a guy walked up from his car parked in the lot. He was greeted and directed to the clipboards. He picked up a pen - and used it to destroy - tear to pieces - the recall petition for Lt. Governor Rebecca Kleefisch, along with several (empty!) ones underneath it.

A detailed list of those involved, showing connections to the sate GOP and to Gov. Walker. and Lt. Gov. Kleefisch. By the time you finish this article your blood will be boiling. This is how democracy is destroyed - by the incredibly selfish and illegal actions of just a small group of narrow-minded people. If you feel like commenting in this post, please be sure to read this article.

Not only do these saboteurs plot to destroy recall petitions but they had organized several past sabotage events and disruptions aimed at the democratic process. This particular group is as vile as they come, and it goes to show how far America has fallen that this group has been operating with near-impunity with tentacles reaching to the statehouse. Next time you see an Iraqi voting with purple dye on their finger, don't laugh - their process is probably MORE honest than our own. How far we have fallen!
edit on 26-11-2011 by Blackmarketeer because: (no reason given)

I'm not shocked or surprised and I immediately tend to believe it. The new status quo.

Apparently I'm not the only one by the lack of responses.

I think I'm going to troll 4chan and write a news article about the nonsensical ramblings that occur there.

Second, I'm not sure if they're committing any crime. I know, I know, but listen. The article indicates that the sheets these guys claim to be handing out only say "Should we recall Gov. Walker?' No "we should," or "we shouldn't." What they say they're distributing are not recall petitions, so they can do what they want with them. (Again, if I'm reading it correctly.)

There might possibly be some kind of a fraud case, but if they just handed someone a sheet as I think it looked, and asked "would you sign this?" I think they'd walk easily.

Unfortunately for me, I had difficulty following the politiscoop articles. If you see something there I'd be glad to be corrected.

Sum up? I don't see evidence that the Tea Party or Gov. Walker was involved, and there may have been no crime at all, and certainly not destroying petitions (Except for the one guy with a pen, and even that's doubtful.)

posted on Jan, 5 2012 @ 07:42 PM
link
I said to my self, "how in the world can they do this". They can. It's disheartening. There are evil people in this world. I've been on this planet for 56 years. People aren't the same. I cannot understand how poor people can support rich people that want do away with their quality of life. It blows me away.

Caught in a felony! Destruction of public records and voter tampering and voter fraud!

Even yet more proof that the TP is The American Nazi Party just Thank GOD that they are officially out of contention for the 2012 POTUS elections!
edit on 5-1-2012 by TheImmaculateD1 because: (no reason given)


The participation of them to shred or destroy recall petitions is enough legal grounds to constitute a felony.
edit on 5-1-2012 by TheImmaculateD1 because: (no reason given)

The only question I have is whether these were actually recall petitions, or non-official pieces of paper designed to fool people who didn't even read what they were signing.

If they were official petitions, jail sounds about right. If not, I'm not sure what they could be charged with.


Regardless of what the documents were recall petitions are classified as something called "Official Government Documents" and to destroy them is a felony!

I still agree with you. Destroying recall petitions is a felony, and I hope people doing that go to jail.

Let me try to use an example to show what is confusing me. If I took a sheet of notebook paper and wrote on it "If you hate Gov. Walker, sign here." That would not be a recall petition, would it? I can't imagine I would be jailed for throwing that piece of notebook paper away, would I?

Sure, sneaky, but I don't understand how my example would be illegal.


No that would NOT be a recall petition.


Also, I lived in WI during the Legislative Recall and this was going on then too. I saw someone drive up and steal the petitions then drive away. He was later arrested.


Technically and short answer is yes but long I'm not sure of meaning that to recall a politician from office is to call the offices of your County or State Election Commission as the name will vary from State to State so be on the lookout for that as they can provide you with the information to get your campaign started! Good luck and enjoy!