The probability of a major earthquake occurring and triggering a massive tsunami in the Pacific Ocean off eastern and northeastern Japan within the next 30 years has been revised up to 30 percent from 20 percent, a government panel said Friday.

TextThe Earthquake Research Committee has reexamined its long-term estimate of killer temblors after the March 11 quake and tsunami and found that a quake that triggers a tsunami as powerful as the one caused by the 1896 Meiji-Sanriku Earthquake, which killed more than 20,000 people, is more likely to happen in the sea zone stretching 800 kilometers north-south. The panel stopped short of predicting the magnitude of the possible quake but said past records suggest it would be magnitude 8 or stronger. The tsunami triggered by the 1896 quake reached as high as 38.2 meters, according to the records. The quake's estimated magnitude ranges from 6.8 to 8.5 among experts. Meanwhile, the committee said the likelihood a quake with a magnitude of up to 9 occurs within the next 50 years in a sea area off Miyagi and Fukushima prefectures, which is closer to the shore than the 800-km zone, is almost zero percent. link(thecomingcrisis.blogspot.com... 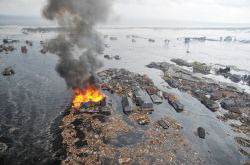 “All things have second birth;

The earthquake is not satisfied at once.”