This Black Friday, as millions of Americans scramble to find the "best deals" on consumer goods, thousands of Chinese manufacturing workers are striking to demand livable wages, job security, and other basic rights. In Huangjiang alone, 8,000 striking shoe factory workers took the streets Thursday, blocking roads and standing down lines of riot police. Their factory, owned Yue Yuen Industrial Holdings, is a major provider to the sportswear company New Balance.

It seems fair to say these workers are striking for a "new balance" with their management, and the system of global exploitation that management serves. Facing police repression and media censorship, striking Chinese workers are standing up against the same unfair economic system we are fighting on Wall Street and across the world. Today, Occupiers everywhere are standing up to Boycott Black Friday in an effort to raise awareness about the exploitation and inequalities that produce the goods Americans purchase.

This is how Occupiers Occupied Black Friday, not by being in anyone's face, not by causing riots but by boycotting and inviting shoppers to their camps. They also acknowledged the slave labor that makes Black Friday possible so that we Americans can get our goods at low low low prices. Good for the people of China for standing up for their right to earn a decent wage for the work that they do, I hope that they don't die trying.

Here's a video of so Occupiers at Black Friday: 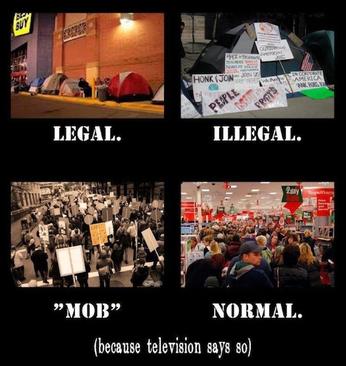 Mods please note this is from Occupywallst.org News site, not their forums...thanks

posted on Nov, 25 2011 @ 06:46 PM
link
I am amazed that OWS was so bold as to call for a boycott of Black Friday, because all that could possibly prove is how impotent and insignificant they really are. Case in point:

This is an easily measurable way to see how ineffective they are. They call for a nationwide boycott of Black Friday, and retailers are already reporting the best Black Friday sales ever. Embarrassing.


its good to see the little people taking action. especially in china one of the worst when it comes to silencing any and all anti Gov/Business protests.

gotta love the labeling by the media... I wonder what they will say next year when no one has enough cash to care about black friday.

Originally posted by SavedOne
I am amazed that OWS was so bold as to call for a boycott of Black Friday, because all that could possibly prove is how impotent and insignificant they really are. Case in point:

This is an easily measurable way to see how ineffective they are. They call for a nationwide boycott of Black Friday, and retailers are already reporting the best Black Friday sales ever. Embarrassing.


black friday isn't even over yet it will take a bit longer to see the real numbers..
and it is far from a fail when they obviously feel the need to hastily publicize their supposed success..

OWS hasnt given up and the people never will...wrong FAIL prediction yet again.

its like the same stupid stuff during Katrina... when the city was flooded, a mini-holocaust event was just starting & there were mindless zombies getting busy in stealing TVs for a flooded place with zero electricity in the medium term future..

here we have the whole economy coming apart at the seams with bailouts of the too-big-2-fail
and the zombies are focusing on x-boxes and TVs and all sorts of digital devices that will require a IP fee
to run the dang thing....
i guess they feel the food stamps will keep rolling in, so thats all the 'prepper' work they have to do.

OWS needs to instigate the college loan defaults program ...to remake the "2-big-2-fail" paradigm,
by creating a OWS massive army with the working motive of:: 2-many-2-jail...

and attempt to break the back of the $2 Trillion Pel grant machine that indebts the millions of degree pursuing collegians for the first 20 years of their careers,


They didn't call for everyone to boycott, they said they would and they did. From a handful of people in one park, to over a million nation wide in only 2 months, I think we're doing pretty good. I find it interesting that anyone can call standing up to corruption, embarassing and even more interesting that you can read about workers in China standing up for their rights and only spit on the people that acknowledge what that means. I hope your holidays are nice all the same.

Outside Macy's flagship store in New York, some Occupy Wall Street activists chanted "boycott Macy's" and "stop supporting big corporations" even as about 9,000 people lined up to shop when the store opened at midnight.

While it is the busiest day of the year in terms of store traffic, it does not always mean that sales will soar for the season.
Despite brisk sales right after Thanksgiving in 2008 and 2009, total holiday season sales fell as the recession gripped the country.

Yet it expects sales for the full November-December holiday season to rise just 2.8 percent, well below the pace of last year when sales rose 5.2 percent.


It looks as though the protests did have an effect. just from this one article 9,000 shoppers have an idea in their head...
the outlook for major stores isn't good whether its from the protest or not, things aren't as good as they seem in America and people are protesting for a reason.