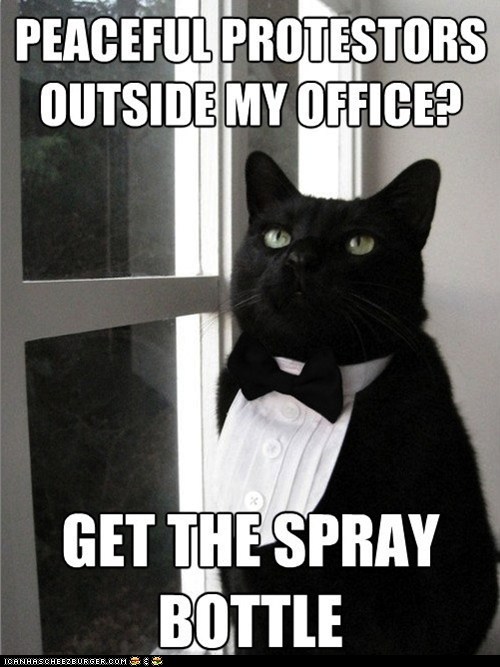 
I haven't seen one in eons. What kind of sites do you frequent? I knew some one would pop up and be critical, discouraging, degrading, condescending or somehow negative because that's how it goes usually. Your critical attitude is overused, TsukilLunar.


Lolcats are over-used? Bring me my spray bottle.

Your critical attitude is overused, TsukilLunar.

It is. Not sure why you seem to be mad at me though. My attitude was not "critical". I was stating that lolcats are overused. It no longer even a joke.

However, before you accuse someone of being "critical", maybe you should look at your own post.

Your critical attitude is overused, TsukilLunar.

It is. Not sure why you seem to be mad at me though. My attitude was not "critical". I was stating that lolcats are overused. It no longer even a joke.

However, before you accuse someone of being "critical", maybe you should look at your own post.


You were just stating a fact? Me too. That type of response and attitude is so predictable and overused that it's the last time I'm posting on this forum. Been there, done that and it's just stupid to interact with people on this level. I thought a joke about protesters would escape the negativity that pervades online forums. You are so clever. Keep on posting encouraging words. Excellent.


I really hope his unfortunate attitude doesn't really discourage you from posting on here. His contribution was obviously worthless, albeit it was just in response to a picture, but still, not needed indeed, and there are a few among this place that pride their dignity and chivalry.

posted on Nov, 26 2011 @ 06:37 AM
link
There are some great people here. It's not just that comment (I've never noticed that poster before that comment), nor this website. I've noticed this trend in consciousness everywhere online and in entertainment. It's the comments in other peoples' posts that are idiotic that really annoy and depress me. It's more what I read than what I've personally received. I hate the song no matter who sings it, ya know? It's not a positive or creative influence on my consciousness. I'm not inspired or mentally stimulated by it. I think it's cutting and acerbic rather than clever and funny. It bores the ____ out of me.

I read the headlines on other websites. Most of the news here isn't 'breaking' for me. If I was into stars and flags, I'd post breaking news and stuff about guns. There's a total lack of interest on my part to continue posting things and having people call me stupid or tell me what's wrong with my post. Why would I do that? What's the payoff? Intelligent conversation and sharing of information was what I was looking for. That used to happen for me online. Did the aliens abduct all of the cool people or what?

It's a reflection of society, not ATS. This site is one of the best-if you want to play that game. I don't. I don't want to be the acerbic, derisive commenter nor the one who baits them by posting something. I'm not into arguing as a means of stress control nor have I a need to seek out people to fight with online. So, what am I doing here? Really.

I know enough of these kind of people in real life. They're a dime a dozen. You know, the kind of person that when you say something as neutral as, "It's a nice day!" They'll start arguing and tell you why it's not a nice day. Of course, their part of the conversation will take 10 minutes. They'll have to list all the problems they have with your statement that it's a nice day. I don't care for that. That's kind of what forums are all about. I'll leave them to have those discussions with their cashier at the grocer's or the perverted neighbor who peeps in my windows at night. I've got better things to spend my time on. Online trolls can hang out with government shills. Heavenly! To be a Mod would bore me to tears. Moderating 12 year olds, shills, trolls and role players? Augh! I don't even enjoy reading their clever little put downs.

Maybe I'll be back after a break. Burned out on that redundant tune for now.


Yes, this is true wheresoever you go. Unfortunately, most people have a very strong ego (ego in terms of "spirituality") and so negativity rules this world. They just can't help but boast around their opinions which add more to their ego and, in conglomerate, their self-sense of identification; giving them that "dualistic" approach to a sense of worth. I feel a mass awakening is in store for humanity though. When it'll be though, I have no clue.


Is that a problem? Why shouldn't we?


By all means, go ahead. Its very telling of your personalities.


Are you calling us 'catty'?


LOLcats are dead. They only apply to small farm children who were born in leap years

I think this forum has a few small farm children who were born on leap years and are actively posting members!

I looked at your only post on ATS. You have a screenshot of your FaceBook page? Isn't that like the pot calling the kettle black?
edit on 5/12/11 by RainbeauBleu because: (no reason given)