General Electric *is* The Federal Government - The Venn Diagram

Why GE? They have created plenty of American jobs and have helped propel the US to the forefront of technological and engineering innovations. GE is a feel good American institution, through and through. 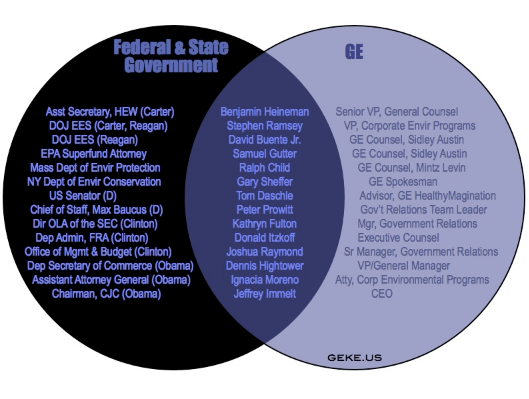 Again why GE? Well...they don't really pay taxes and instead "legally" steal taxes. The company might as well be a tax-exempt religious organization. And here's the surprise, GE actually took your tax money, $340 billion of it, by creating loopholes in the government bailout program using its lobbyists and former employees to pressure changes on Capital Hill. GE inflitrated the government, just like the others (a common theme we're seeing with Goldman Sachs and Monsanto as well).

GE's ability to live in the best of both worlds -- capitalizing on the federal safety net while avoiding more rigorous regulation -- existed well before last year's crisis, because of its unusual corporate structure.

If that were you or me who stole taxes, we'd get a long jail sentence. But not GE. The simple truth is GE is really good at making money and protecting it. Everyone at the top of GE is rich, disgustingly rich. Which in itself is fine, but the means to get there are slimy - those GE executives have "legally" stolen tax money to further their wealth.

That's bad. But I know GE will get away with it because we need its innovations and job creation (Goldman Sachs and Monsanto we definitely do not need)

But they must PAY TAXES. This country needs it, badly. And to think one of our own positive institutions has not only robbed us, but gets away paying pennies on the dollar to what it owes is a slap in every American's face.

These names, in the Venn Diagram, will be added to the other names from the other diagrams to create a picture of who are worst influencers in Washington DC.
edit on 23-11-2011 by Jason88 because: (no reason given)

Well, what does this story say about the Government?


Don't they also not pay a penny in taxes? GE also controls this chunk of the media:


GE is purposefully not on our radar with the help of its media outlets. Has NBC ever been critical of its parent company? Likely not. And we know MSM is cahoots with each other for the most part, I doubt GE ever gets the spotlight on it and its people in DC.
edit on 23-11-2011 by Jason88 because: (no reason given)

posted on Nov, 23 2011 @ 02:35 PM
link
you sir or madam are doing great justice to the info grafic
these diagrams are a great way for the average person to see why and where these problems exist

you are a true scholar and your imput is valuable

the idea is if the politicians have a close relationship with these corps there will be a group of traders who are always on the upside of trades.

if the blind trusts of the politicians (blind trading accounts) are trading in monsanto or ge or G/S and on and about the same time favourable legislation is passed for these corps,

then a corrilation can be made between the activities of the legislators their blind trusts and the laws passed that effect those trusts.

at first it would be simple to just look for when these stocks go up and look at who buys prior,
and which trading houses acomodate which blind trusts and any trades that are prior to favourable legislation with a higher than mean payoff would be suspect.

we all know that there is political connections between the companies,
logic says these greedy bastarsds have been geeting away with this for so long that they have gotten greedy and lazy.

i suspect we will find the number of times the blind trusts beat the mean average profit for trading will be an effective metric to show the "blind trusts" are not blind enought to prevent them from always making higher than ever one else.


I like your thinking. Let me do some research first before committing to this noble effort. With the US holiday upon us, I'm going to be offline for a few days, so that should give me time to think and get back to you. I'll U2U the message. Thanks for thinking of me. And glad you find value in these correlations.


To be true, I'm partially with you; it's a good US company in many ways. But, GE has an unconventional business structure (GE Capital for instance) and the US treats it in an unconventional way, which destroys the Rule of Law and allows for special treatment.

I'm not a black and white person, I know many of these issues live in the gray area, but please GE pay taxes! Help us out of this financial mess.
edit on 23-11-2011 by Jason88 because: (no reason given)


GE keeps you safe and broke

will GE spend its OWN money to protect america?

or is it all about profits


im talking to a few people with the aim of creating info grafics and a data base of the people in america that have cost americans the most money,

top of the list is ben bernake @ 15 trillion
the joe corzine at 1.6 billion
berie madoff ect

the tag line will be bernake pulls a madoff
or if we can show that the largest losses benfited a small group of interconnected people,


i intend to add,
sydonia and any other public expendatures that cost money for no out come. 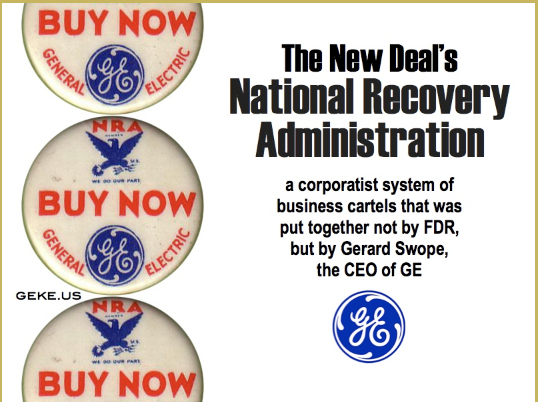 Maybe we should be digging into Gerard Swope to trace this thing as well.