In a new plot against Iran, Washington Post quoted US officials as claiming that Iran may have sent Libya shells for chemical weapons.

TEHRAN (FNA)- Iranian Foreign Ministry Spokesman Ramin Mehman-Parast strongly rejected the recent allegations raised by the West about Iran's possible collaboration with the former Libyan regime in area of chemical weapons production, reminding that Iran is a pioneering country in the campaign against WMDs.

"Our country is a victim of the chemical weapons and has been a pioneer in the campaign against the use of such weapons," Mehman-Parast told a weekly press conference here in Tehran on Tuesday.

"We were among the very first countries that sought a ban on chemical weapons," the spokesman explained.

He blamed the western states' involvement in organized crimes and production of the Weapons of Mass Destruction (WMDs), and said the western states are equipping their puppet (like Saddam who recieved those weapons to use against Iranian in the war.) regimes with WMDs, including chemical and biological weapons, and at the same time allege to be advocating human rights.

Such allegations come as Iran has been amongst the biggest victims of chemical weapons and demanded a practical global ban on chemical weapons use and production. In October 2011, Iran's envoy to the Organization for the Prohibition of Chemical Weapons (OPCW) urged the organization to send the US and Russia's dossiers to the UN Security Council for punitive actions after the two states said they won't comply with their Chemical Weapons Convention (CWC) undertakings.

"Given the fact that the US and Russia as major owners of chemical weapons have officially declared that they cannot eradicate their chemical weapons within the specified deadline (April 29, 2012), this organization should inform the UN Security Council and the General Assembly of their case," Kazzem Gharibabadi said addressing the 66th meeting of the OPCW Executive Council in the Hague, the Netherlands.

Tens of thousands of Iranians were killed and wounded by chemical weapons during the Iraqi imposed war on Iran (1980-1988).

Around 100,000 Iranians are still living with the effects, which include long-term respiratory problems, eye and skin problems as well as immune system disorders, psychological disorders, genetic disorders and cancers.

Saddam was a pupet and he was helped by those who thought he could take care of Iran.

The Iran–Iraq War began in 1980 when Iraq attacked Iran. Early in the conflict, Iraq began to employ mustard gas and tabun delivered by bombs dropped from airplanes; approximately 5% of all Iranian casualties are directly attributable to the use of these agents.[citation needed]

Chemical weapons employed by Saddam Hussein killed and injured numerous Iranians, and possibly Iraqis. According to Iraqi documents, assistance in developing chemical weapons was obtained from firms in many countries, including the United States, West Germany, the Netherlands, the United Kingdom, and France.

About 100,000 Iranian soldiers were victims of Iraq's chemical attacks. Many were hit by mustard gas. The official estimate does not include the civilian population contaminated in bordering towns or the children and relatives of veterans, many of whom have developed blood, lung and skin complications, according to the Organization for Veterans. Nerve gas agents killed about 20,000 Iranian soldiers immediately, according to official reports. Of the 80,000 survivors, some 5,000 seek medical treatment regularly and about 1,000 are still hospitalized with severe, chronic conditions

The Chemical Victims of Iran: the forgotten casualties of the Iran-Iraq war

This thread is about the recent plot against Iran.

They are working hard to take military action against Iran by any mean necessary. There are always reasons , but they just fail to get the result they want.

The blood of those people is on their hand , but they are just trying to justify another attack.

These are the pictures from attack or Sardasht : 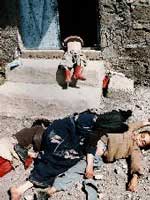 That sure sounds like something a country hell bent of getting WMDs and using them on everyone would say doesn't it?

Sadly, we already played this game with Iraq, people have no attention span or memory, so it will surely work again.


I am doing my best here to prevent it happen again , or I will be questioned (In the afterlife) about not helping others to be informed.

posted on Nov, 22 2011 @ 12:04 PM
link
I think this latest accusation is BS. In my interview with NATO for the Libya story, I was told in no uncertain terms that Gadaffi had given up his WMD's and was no longer a threat.

But Iran isn't helping itself with all of the threats and bravado it's generals have been spouting. Just yesterday, they DARED Israel to strike. I think they are going to get their wish.


I live in Iran and the attack on Iran is a normal issue , Iran has been threatened military and just literal.

Iran has aimed Israel to it's criticism for it's occupying Palestine , Nile to Forat plan.

Israel knew that Iran is not going to stay silence , so they considered Iran as their enemy.

Is just ordinary in Iran and they always do that. This time had a international reflection.

It is not true to kill a children who exposes The Emperor's New Clothes.

Thank you for replying.
edit on 22/11/11 by hmdphantom because: (no reason given)