The Truth Behind The Crystal Skulls

posted on Nov, 22 2011 @ 07:11 AM
link
I have just watched a great documentary by Nat Geo called "The Truth Behind The Crystal Skulls" that does an in depth investigation into the Mitchell Hedges "skull of doom". I cant link anyone to the documentary as its not on youtube but you can see the trailer Here. Ill outline some of the tests they did for the program. Anna Hedges claimed that she found the skull buried under a collapsed altar inside a temple in Lubaantun, in British Honduras, now Belize in 1924.

One of the claims at the Mitchell Hedges website is that its impossible to replicate even with modern machinery. So Nat Geo contracted Barry Liu owner of Skullis to have a go at making an exact replica. 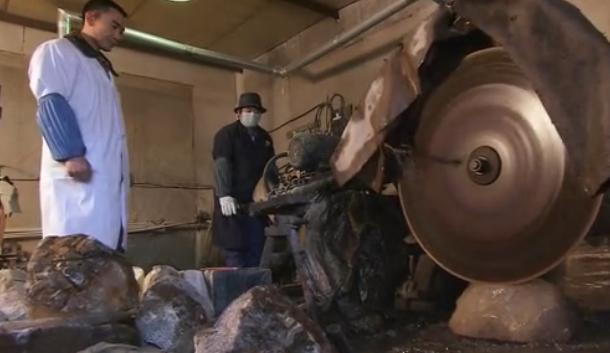 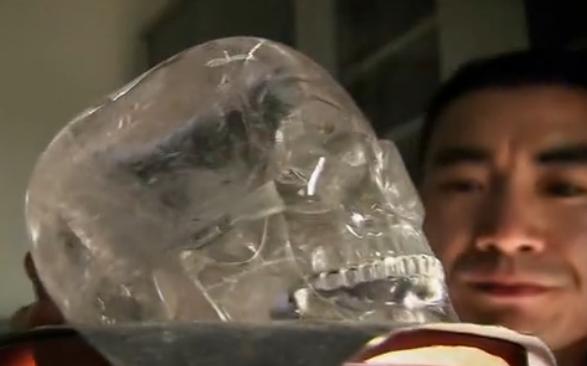 He managed to make an exact replica in 8 days.

Next Dr John Morris at Institute of Archeology, Belize had a look at the skull and came to the conclusion that it had no similarities with myan art and that it didnt look like any other skull found in that part of the world in pre-Columbian times. 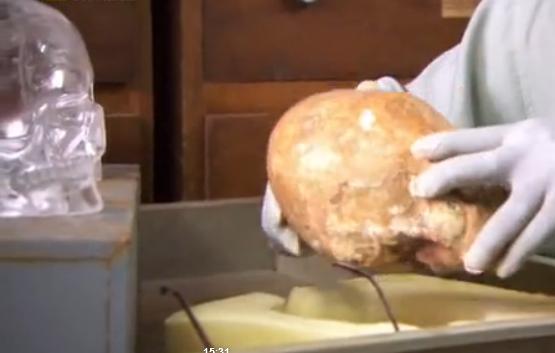 Next forensic artist Gloria Nusse had a look at the skull and cam to the conclusion that it must have been made from a reference human skull as it was so accurate. She then made a cast of the replica skull and set about making a facial reconstruction to see if the had ancient American features. 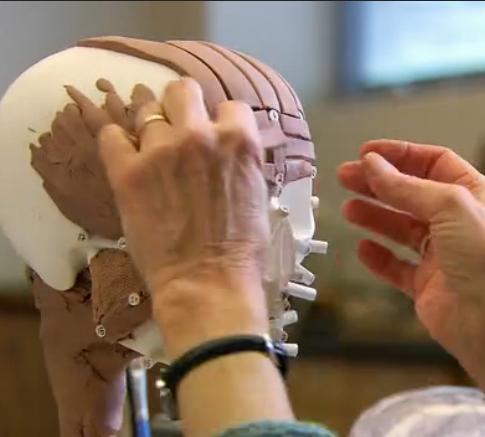 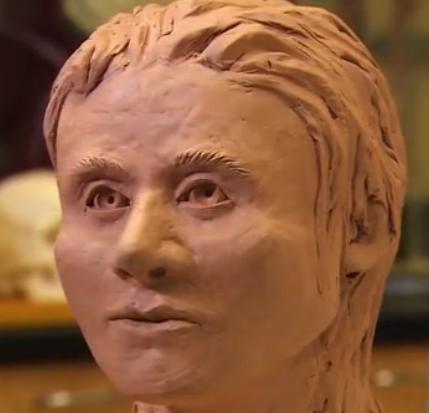 The face turned out to be female and was clearly European so it cant have been created by ancient Americans 3600 years ago as its claimed.

Dr John Morris explains that in attempt to find where Anna mitchell-hedges claimed to have found the skull in 1927 they re-mapped the site but they couldnt find any of the tunnels or passages she described.

Norman Hammond (academic and Mesoamericanist scholar) says that Anna Mitchell-Hedges wasn't even on the expedition in 1927 as she is not mentioned in any of the official logs or journals. There was also no record in anyones journals of the skull having being found at the time they say it was..

So where did the "Skull of Doom" come from?

It seems that Mitchell-Hedges bought it at an auction from Sotheby's ,Burney , UK in 1944, many years after the expedition to the temple in Lubaantun. A copy of the Sotheby's catalog has been discovered. 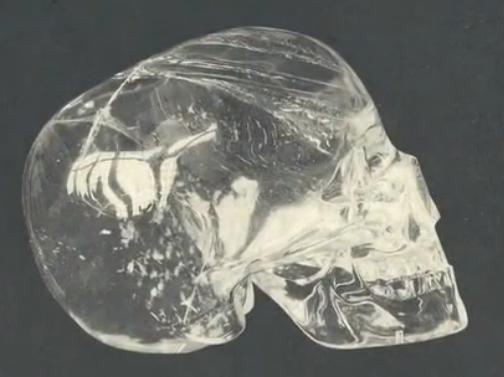 This would explain why the skull was European. There are many more claims as to why the skull is fake in the documentary and the Wiki page on crystal skulls so you can make up your own mind but for me its pretty clear that Mitchell-Hedges and his daughter Anna Mitchell-Hedges have been caught out as hoaxers. 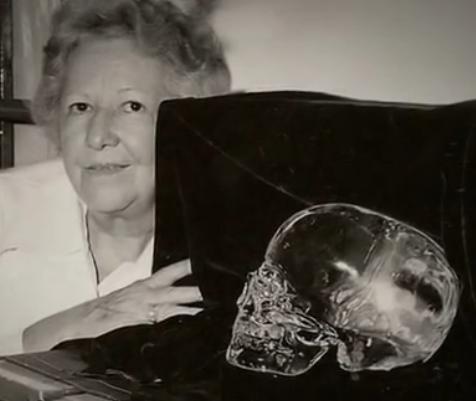 It would to good to find out if it could be replicated by hand and not by machine. I know they cannot carbon date crystal yet.

But there is not just one crystal skull is there ? you mention Skulls in the title and we have only one example above . Here are some others.

The "British" Crystal Skull Asingle piece clear quartz skull, held in the British Museum of Man, in London, England since 1898, purportedly found or bought by a soldier of fortune in Mexico in the late 1890's. This skull is more cloudy than the Mitchell-Hedges and has an elongated back of the head. The quartz comprising this skull is very clear and there is a tool mark found on this skull. OLD

The "Amethyst" Crystal Skull A single piece of amethyst crystal discovered in a Mayan cache of artifacts in Mexico by a Mayan Brotherhood in the early 1900's. This crystal skull is in California and is for sale. The distinctive features are the circular indentations in the temple and a white squiggly line that goes the circumference of the skull ( Editor's Note: This was the first ancient crystal skull that I experienced in person.... ). ANCIENT


Hi judus , the title i used was the title of the documentary.

It would to good to find out if it could be replicated by hand and not by machine.

One of the tests they did in the documentary was to examine microscopic images of the Mitchell-Hedges skull and they concluded it was to smooth to have been made by hand. It had to have been made with modern machinery and using modern polishing techniques that were around at the time it was presented as a 'discovery'.

I know they cannot carbon date crystal yet.

Yes there is no way to carbon date when a carving or sculpture was made.

Kudos National Geograhic I'll definately be checking this series out.

Will comment more later when time allows but just want to say the Nat Geo documentary is on youtube, but under the title "Crystal Skull The Truth". Here's part one. I'll leave it to you to embed the others. (Same user has all parts on their channel.)


(Warning: it's pretty loud so you might want to turn it down. )

posted on Nov, 22 2011 @ 07:54 AM
link
Nice work I think too often people consider that some of these older stories have to be legit just because they're old, but as long as man has walked the earth there have been charlatans, hoaxers and flim-flam artists. This is an excellent example of how modern technology can be used to expose hoaxes even when they're nearly a century old.

posted on Nov, 22 2011 @ 08:03 AM
link
By viewing some of the evidence in he OP I do think that this one may be a hoax. people will always try to profit from the unknow in some way.

posted on Nov, 22 2011 @ 08:42 AM
link
I kept wondering why they would only focus on debunking 1 skull, while there were 12 others... Anyway, the skull was successfully replicated using modern machinery, but NatGeo doesn't go into how the original skull might have been made. Also- Anna and her father clearly did not "discover" the skull - so who did? Methinks there is still some mystery left.

I don't have a problem with the idea of this, or any other of the crystal skulls being hoaxes. But at the same time, as has been said before on ATS, just because we can replicate something, doesn't make the original a fake. And just because the face didn't come out indian doesn't make it fake either.

My point is, NatGeo is no less questionable to me than any other source of info. They're just as capable of twisting the facts to suit them as anyone else is. Maybe more so, because they are a mainstream outlet for this kind of info. However, having said that...

In this case, because of the supporting info, I lean toward their findings being legit. But I would like to hear some rebuttal from the other side. If they have any.
edit on 11/22/2011 by Klassified because: (no reason given)

The British Museum catalogues the skull's provenance as "probably European, 19th century AD" and describes it as "not an authentic pre-Columbian artefact". It has been established that this skull was made with modern tools, and that it is not authentic.

n 2009 the C2RMF researchers published results of further investigations to establish when the Paris skull had been carved. Scanning electron microscopy (SEM) analysis indicated the use of lapidary machine tools in its carving. The results of a new dating technique known as quartz hydration dating (QHD) demonstrated that the Paris skull had been carved later than a reference quartz specimen artifact, known to have been cut in 1740. The researchers conclude that the SEM and QHD results combined with the skull's known provenance indicate it was carved in the 18th or 19th century.

The "Smithsonian Skull", which is Catalogue No. A562841-0 in the collections of the Department of Anthropology, National Museum of Natural History, was mailed to the Smithsonian Institution anonymously in 1992, and was claimed to be an Aztec object by its donor and was purportedly from the collection of Porfirio Diaz. It is the largest of the skulls, weighing 31 pounds (14 kg) and is 15 inches (38 cm) high. It was carved using carborundum, a modern abrasive. It has been displayed as a fake at the National Museum of Natural History.

posted on Nov, 22 2011 @ 09:37 AM
link
Having seen the episode, it's left me utterly confused
The only conclusions I can take from it is we are capable of replicate it at this time, but the replica is not nearly as perfect as the original under a magnifying glass.


Some of the tests did seem a bit far out but then again they are responding to really wacky claims that people have made about the skull over the years. Like the claim that quartz is just a gateway to other dimensions and can hold information like a computer.

posted on Nov, 22 2011 @ 01:26 PM
link
NatGeo believes that 19 arabs with boxcutters brought down three skyscrapers in '01, so anything they say about the crystal skulls is suspect. All they are is a propoganda mouthpiece.
edit on 22-11-2011 by dillweed because: spelling

heres the newest skull - found in the remainings of joseph goebbels:
www.rense.com...

But there are real Crystal Skulls out there that can't be explained.

There was a great Coast to Coast show on the Skulls not too long ago. Anyone with Coast Insider should check it out.

Other than that, Great post, thanks for the info!

Always nice to weed out the fakes.

You've posted an image - Anna Mitchell-Hedges and the Skull. Stop and look at the image with a clear mind.

Just look at the skull but not as a skull, as an Hologram. Clue - The front and the back ...One of the things you'll see is who made it.

It also tells you where it was made ... but that is asking you too much.


Please post a link to the exact picture you are speaking of. I would like to have a go at what you suggest.

posted on Nov, 22 2011 @ 07:33 PM
link
I don't think the skull resembling a female European skull denounces its age at all. We're still scratching the surface of ancient cultures that traveled the world. There are reports the egyptians may have had trade with south american cultures, and we all know the vikings and other earlier european tribes we're sailing & sculling around in their boats and even found their way to the Americas. The skull may have been a gift to a tribal king.
Science is often handicapped by its search for evidence but in doing this they often times forget to look at story and context of evidence, which is just as important.

Good information in the OP though, whether the evidence is all there or not.