What the hell is in the sky over Switzerland?

posted on Nov, 21 2011 @ 02:28 PM
link
Apparently some strange black and pink objects have been captured in the sky over Switzerland by the Google Street View camera. A castle in the clouds, a strange cloaked figure pointing off in the distance, or maybe just a smudge on the lense? 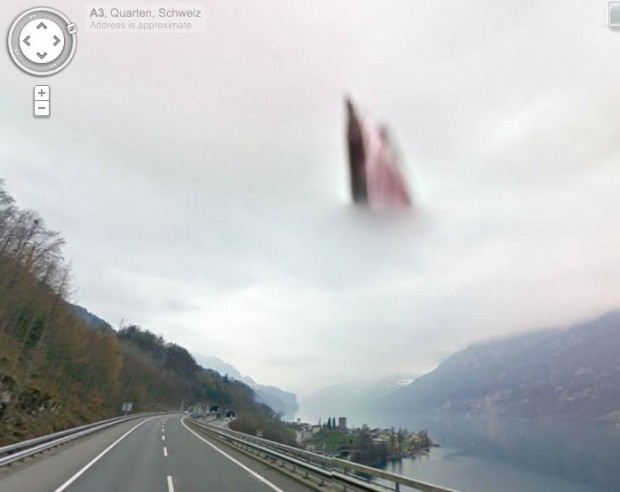 What Are the Odd Figures Google Captured in the Swiss Sky That Are Making the Rounds Again?

This isn’t the first time this strange black and pink figure in the Switzerland sky has made it on the Internet and Google Street View junkie discussion boards, but it’s making a wave on the Internet again. Perhaps the resurgence is because of the recent hoopla over mysterious structures seen from Google Earth in China’s Gobi Desert. But, regardless, the fact that speculation over this image has been drawn out for more than year reveals how fascinated people are over what they can find using Google’s map and earth functions.


Whatever is it, its pretty creepy and mysterious looking. I wonder if anybody ever saw this thing in person or if it only exists in the universe of Google Street View?

posted on Nov, 21 2011 @ 02:31 PM
link
I love coming across things like this, especially this one because it is....strange! I noticed when i looked myself that not only do you see it above that one point, but going all the way up that road and into a pitch black tunnel, you can still see "something" about 200 feet into the tunnel, i really want to say it is a camera artifact but even the position of the "people" changes as you move forward..strange!


It is definately Monkey just flying around on his cloud with a passenger, perhaps pigsy or tripitarka finally got the courage up to take a lift!. Either that or no, i am unable to bring myself to say it . . . . . someone will be along in a moment to give you the real real figure that it is . . . . . . just wait.

It has been discussed before. Here is one of the threads I found. I do remember to have seen some other as well.
www.abovetopsecret.com...

I do not remember exactly what the explanation was, but take a look in the above thread.


Found another link as well.
www.abovetopsecret.com...
edit on 21-11-2011 by LiberalSceptic because: (no reason given)

posted on Nov, 21 2011 @ 02:53 PM
link
I think Google Earth is known for putting random objects like that in their street views. A good example was that flying saucer pictured off the coast of South Africa.


You mean the first link?
It goes to West Palm Beach FL


A fly probably got creamed on the Google Camera and smudged itself all over the lense. You have to wonder how often they wash that lense on the street car. Windex anyone?

Originally posted by WarJohn
Who happened on it first is the people or person behind it.

Between this and the giant pliers spaceship, it gives the impression that someone is hacking into Google Maps and is inserting these images. I think I saw another one which shows a car jumping across a raised bridge somewhere.

Then you have to wonder whether these images are the result of a prankster or someone with an agenda. I wonder how hard it would be to hack that site and put in some crazy image like this?

posted on Nov, 21 2011 @ 03:36 PM
link
No matter how far you back up or move forward in google earth the object stays the same size and is in the same place. Sorry but that means this object is on the lense of the camera. Probably a bug that got squashed on the lens.
edit on 21-11-2011 by joyride0187 because: (no reason given)

It looks to me like the grim reaper leading the virgin Mary off to another plane.......


I was going to say that! But I couldn't remember the name "bluebeam". I remember reading about it in connection with the norway spiral (supposedly a test)....strange all this seems to be in Slavic countries (right?). They were saying that this blue beam thing would project either alien or religious images, to make people think either aliens are arriving or the rapture was happening.......depending on the agenda. I don't know what it's all about or if it's based on reality. I need to read up on it

I know the region, driven on that very street many times, and can say there are no stationary objects in the sky.
Mountains left and right, and a funicular further to the east but also higher up on the mountain. (as i remember)

There is a starting place on the mountain to the left (south) and a landing place down by the lake. but it does not resemble a paraglider.

The thing in the sky reminds of squashed insects on the vizor while riding a motorbike.

if you drive along the street the object stays always on the same spot in relation to the car, you can drive hundreds meters forward it stays, if you drive backwards til the Murgwald Tunnel it is there. In the tunnel its not there yet.

Conclusion; insect squashed on the lens after exiting the tunnel. Black body on the left, blood and guts in red on the right.

edit on 21-11-2011 by svetlana84 because: First edit add, (there was a strange lightpole as well, 2nd edit, deleted the lightpole and added the insect explanation

posted on Nov, 21 2011 @ 08:29 PM
link
To me it has always looked like a Mary and Joseph figurine from a nativity though strangely colored.

posted on Nov, 21 2011 @ 09:06 PM
link
It looks like this set of pics was taken in 2009. If you zoom in all the way on any section of the map, you can see the Google copyright and date imprinted on the pic. You can barely make it out on the creepy image if you zoom in enough.

Here's a spot where the copyright is clearer: