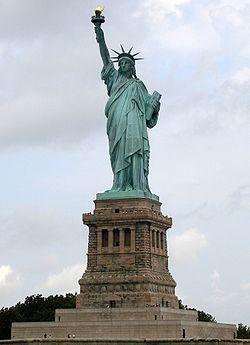 The purpose of this thread is to call for removal of "The New Colossus" from the base of the Statue of Liberty.

It isn't difficult to do.
It is only stuck on there with 4 bolts. 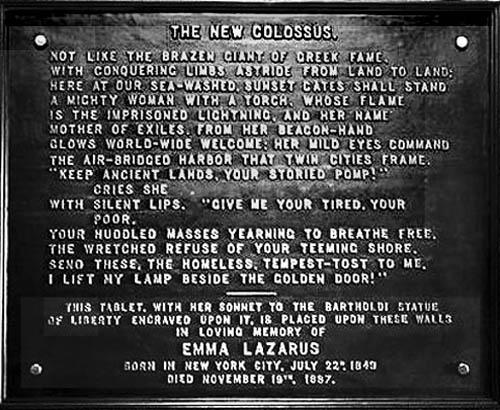 We sure don't want your "poor" and your "refuse" is likely to be seized by ICE and left to rot in prison indefinitely. I think this welcoming, encouraging message sets an incorrect notion of what the USA is looking for and people, learning our history and our past may ignore current events and act on it. I think then with our current shift in immigration policy this welcoming beacon and in particular this message, is something like entrapment. It should be removed since it no longer applies.

Call me a progressive or a stickler for detail - if it does not apply and people believing it and entering the US can be imprisoned for it - it IS entrapment.

The New Colossus
Not like the brazen giant of Greek fame,
With conquering limbs astride from land to land;
Here at our sea-washed, sunset gates shall stand
A mighty woman with a torch, whose flame
Is the imprisoned lightning, and her name
Mother of Exiles.
From her beacon-hand
Glows world-wide welcome; her mild eyes command
The air-bridged harbor that twin cities frame.
"Keep, ancient lands, your storied pomp!" cries she
With silent lips. "Give me your tired, your poor,
Your huddled masses yearning to breathe free,
The wretched refuse of your teeming shore.
Send these, the homeless, tempest-tost to me,
I lift my lamp beside the golden door!"
Emma Lazarus, 1883

We should remember that generation after generation of immigrant migrated into this country and remained without ever seeing a customs officer or obtaining a visa. Many prominent Irish and a significant number of those in law enforcement were born to relatives who ignored and overstayed their visa melting into the framework and contributing to the rise of this once GREAT country.

I have nothing against current immigration policy but think as a Nation it makes us appear small and without mercy, wisdom or substance. But if the shoe fits I guess we ought to wear it.

Fundraising for the statue had begun in 1882. The committee organized a large number of money-raising events. As part of one such effort, an auction of art and manuscripts, poet Emma Lazarus was asked to donate an original work. She initially declined, stating she could not write a poem about a statue. At the time, she was also involved in aiding refugees to New York who had fled anti-Semitic pogroms in eastern Europe. These refugees were forced to live in conditions that the wealthy Lazarus had never experienced. She saw a way to express her empathy for these refugees in terms of the statue.The resulting sonnet, "The New Colossus", including the iconic lines "Give me your tired, your poor/Your huddled masses yearning to breathe free", is uniquely identified with the Statue of Liberty and is inscribed on a plaque in the museum in the base. en.wikipedia.org...

Get rid of it?


Agreed. Get rid of it, or change the immigration policies....one of the two.

We should be authentic to our present existence, eh?

posted on Nov, 21 2011 @ 10:38 AM
link
My grandparents were among those "huddled masses" when they came here to avoid religious persecution, being jews in Poland pre WWII.

It was good while it lasted, but yeah, nowadays, it's entrapment!

posted on Nov, 21 2011 @ 06:19 PM
link
i think it should stay if only to remind us of what once was. it may not be acurate at the moment but, just maybe haveing reminders can help to change things back. if it were gotten rid of, then there goes the history behind it. most would forget how things once were, and it would gradualy disapear from the history books.