posted on Nov, 21 2011 @ 08:50 AM
link
Yesterday I checked the RSOE EDIS Emergency and Disaster Info web site and ran across a biological hazard icon at Ft. Detrick Maryland. Details stated that workers ,involved in a well drilling process, encountered unusual odors coming from the well and immediately put on HAZMAT gear and respirator filter masks. Official statement claimed that testing was done and no detection of fumes occurred outside of a 10 ft. radius of the well. However, an independent investigator, stated that the Area B location was where biological weapons had been buried after a 1970's ban of bio-warfare. She had been investigating possible connections with cancer causing biological agents from Ft.Detrick, and surrounding area residents. She stated that it was certainly cause for concern due to the location.(Area B).

Today, all reference to this bio-hazard had been removed from the website.

Couple of things bother me about this event.

First is why would well drilling be done in a known bio-warfare agent burial site?

Second is what kind of well would be advisable there? Are they using deep well injection for disposal of bio or chemical agents???? If so, are the wells cased deep enough to prevent ground water contamination???

Third, but not least, is why has the info been removed from the RSOE EDIS website.

Something about this event smells bad. !~!

Anyone else see this, or have access to this info??

Fort Detrick officials say tests are being conducted after workers noticed an odor coming from a monitoring well being installed at a landfill. Officials announced Saturday that workers were drilling in a section of the installation called Area B, which is contaminated with chemicals, as part of a groundwater contamination investigation when they noticed the odor Wednesday. Officials say detection of such vapors isn't unusual during such investigations and low concentrations of the vapors were found only within 10 feet of the drill site. They say initial tests showed no risk to the surrounding area, but additional tests will be made public as they are returned. As a precaution, officials say, workers at the drill site will wear additional protective equipment, including respirators.

posted on Nov, 21 2011 @ 09:08 AM
link
I checked the site many times right now and even searched for the event and it is not there.
But, while scrolling through links i found this one referencing to it in the description.

Seem like it really was pulled from RSOE, trying to hush something serious?

Found this on the NDCA site, it was written back in Aug 2010 but might be related


The National Disease Clusters Alliance (NDCA) was formed in 2005 out of the urgent need to identify and respond to emerging disease clusters. NDCA is a group of scientists, public health professionals, and community activists joined together to help communities facing disease clusters

ft detrick is were aids was supposedly created according to some

things that make you go hmmmm

If there was real danger...I would hope that there would be warnings.

There could be anything out there...anything!!!

posted on Nov, 21 2011 @ 11:46 AM
link
The Chemical Weapons Convention Treaty says all nations have to safely get rid of their chemical weapons by April 2012.


Any chemical weapons that were buried or dumped at sea are exempt from the Treaty.....unless some idiot digs them up...then they have to be Declared to the Convention, and safely disposed of.


America dumped chemical weapons alllll over. The funniest story I read was the South Korean Ambassadors house in Virginia I think it was...... was built over a Army chemical weapons dumpsite......and they had to ask him to leave his house so the weapons/canisters could be dug up.

To save money they buried that crap all over. Easier than dealing with it. That stuff had no accountability what so ever.


Yes, that is the event I saw.
Thanks

Originally posted by nightstalker46
Third, but not least, is why has the info been removed from the RSOE EDIS website.

I also check RSOE almost daily, and have noticed that items will be added, removed, and then a couple days later added again. IMHO, nothing odd or malicious with it.

posted on Nov, 21 2011 @ 03:17 PM
link
Or maybe they removed it because it turned out to be a non-emergency? 10 foot spread is nothing to be alarmed about. Regarding the chemicals, it says they are researching groundwater contamination. My guess is THAT will turn into the emergency.

I don't know about this. Only would add that you cannot smell "bio"weapons like you can "chemical" weapons. If they were BIO weapons then the breakout of diseases would only occur after any incubation period. If it was chemical weapons like nerve agents, people would be dropping, dying. Not going to get respirators. Careful of public announcements coming from the military.

posted on Nov, 22 2011 @ 06:36 PM
link
Being stationed at Fort Detrick (no i wasnt a chemical or medical person, Fort Detrick is also the home of the USA-Russia Direct communications satellite link) I can tell you that is the truth about Area B. They have been cleaning it up for the past 10+ years. Everyone that lives in the city of Frederick, MD use water filters in their houses. Its a very real scare of us people in this area. I could go on and on telling everyone stories about Fort Detrick, to include the "Anthrax" building that was sealed off in the 1970's and was not opened again until 2006. 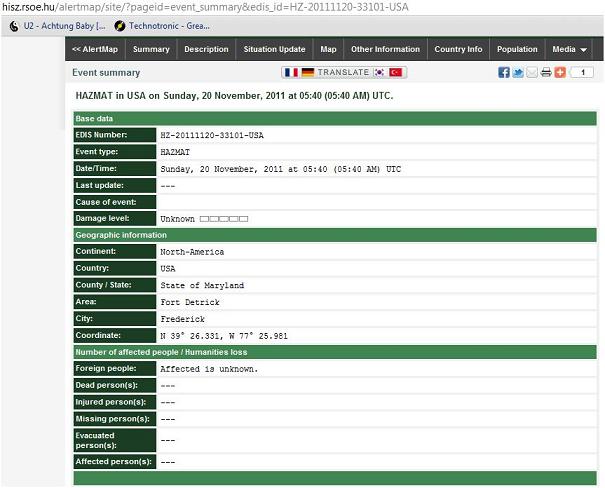 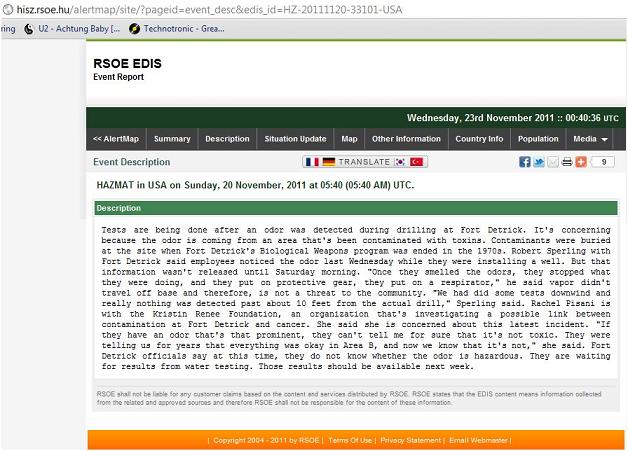