(CNN) – A cop arrived at the roadside wreckage of a June 1968 head-on collision in southern France, took one quick look at the Citroën’s unresponsive driver and, according to one of the driver’s friends, scrawled into the young man’s American passport, “Il est mort” - “He is dead.”


I'd think that the cop had to be pretty sure of what was going on in front of him in order to write that the guy was dead on his passport like that.

Mitt Romney Interview with CBN
While talking with CBN Mitt Romney confirms the story about being declared dead.

Boston Globe
Picture of the wreck available at this link.
The driver of the other car was a Catholic priest.

Blue New Hampshire
Blue New Hampshire doesn't buy the 'rose from the dead' story and points out differences in news reports through the years.. It looks like the story has changed, but the changes were in the press and not from Romney himself who has held steady to the 'came back from the near-dead' thing ...

So a trained first responder writes that Romney is dead on his passport. Was it a case of the cop being wrong? Is this whole 'rose from the near-dead' thing a story made up to somehow improve Mitt Romney's political chances? Was it a case of someone having a NDE and coming back to life? Is the Romney we see now a 'walk in'? (Or maybe a zombie and the zombie apocolypse has begun!! ) Was it divine intervention to save the life of a future POTUS? Was it the devils work and he's really a dead-human-shell with a demon running things who stepped in?

Anyways .. a potential discussion for anyone interested ..
and for those who want to have fun with the 'walk in' thing.

I love the walk in idea! Wouldnt that be interesting....NDE changed life to become the POTUS??

When I was 13 I had heard a voice tell me I was going to hit my head.....an hour later I drowned from a head injury and was brought back to life......True Story.....When I was 16 I had an old lady on a bus tell me that I was a walk in and that I was originally from the time of Atlantis....I thought she was crazy, but after that, my life changed based on the what ifs.......Down the rabbit hole and back I have been, decades later looking back, it has been an awesome ride!

edit: I know that this story sounds crazy.....lol but yes it really is true. That's when I decided I wanted to grow up and help people. (I work with a lot of hospice patients in a hospital setting sort of like a psychopomp).
edit on 20-11-2011 by Starwise because: (no reason given)

Originally posted by GmoS719
Maybe he did in fact die...
Maybe he is the anti-christ!


If he becomes president that wouldn't be so far-fetched

posted on Nov, 20 2011 @ 06:23 PM
link
Good find OP. I have not even spent a minute checking out the candidates since I plan on voting for Ron. Maybe I should investigate and see what Ron is up against. Or I will just let one of you do it. I am lazy, obviously.

I'm not voting for a dead guy.

And yeah, I'm definitely with the other poster and, apparently, a significant percentage of the GOP - just one more reason not to vote for Romney.

Originally posted by kosmicjack
I find the fact that the other driver was a priest extra creepy and suspicious. It's like a movie plot...

That's what stood out to me as well.
Being a paranoid conspiracist, my mind got busy with that.
However, it looks like it really could be just that a drunk French priest ran into someone.
In any case ... my vote goes to Romney = Zombie. He's stiff enough ...

I'd think that the cop had to be pretty sure of what was going on in front of him in order to write that the guy was dead on his passport like that.

Wow - I never heard this story. Thanks for posting it.

Fun to think about though....

Rich
Old
Mormon
Not
Elected
Yet

posted on Nov, 21 2011 @ 09:36 AM
link
Looks like Herman Cain and Mitt Romney have survived some head trauma, its a toss up for the anti-christ. But keep in mind that the MSM keeps calling Cain the anti-Romney. 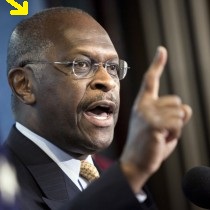 Here is a pick of Cains massive head dimple.

Head dimple ..
Obama has scars running all across his head. Google up Obama head scar pics ....
Oh .. and the next queen of England - Kate - has a big one on her head too.
The average population doesn't have all this head stuff going on ... does it?
Seems the power players have more of it ... could be wrong .. but that's what it looks like to me.
Strange.

posted on Nov, 21 2011 @ 10:07 AM
link
Ron Paul is just a hard working member of the house.
not the living dead.
vote RON PAUL - republican primaries.
show msm that you are not a zombie.

Originally posted by jibajaba
Ron Paul is just a hard working member of the house.
not the living dead.
vote RON PAUL - republican primaries.
show msm that you are not a zombie.


Originally posted by jibajaba
Ron Paul is just a hard working member of the house.
not the living dead.
vote RON PAUL - republican primaries.
show msm that you are not a zombie.

That's foolish.
No vote is wasted.

This is one thing I hear more and more from a generation that has lost sight of anything honorable in this country.
No offense to you personally, but not voting is a fools game. This is why the crooks are able to stay in power.


Vote... if you don't use your voice, you don't deserve to have one.
By not voting:
You have given up, submitted, agreed to live as a broken slave. By not voting you prove that you are a drone. Beaten by a corrupt system that you are too afraid to try and change.

Sad to see all these young people whipped like dogs into obedience.