Psychics Help Me Find Something I Lost

posted on Nov, 19 2011 @ 08:18 PM
link
Been awhile since I've seen one of these threads and I am thoroughly stumped. I was going to go for a jog today, and went to grab my pistol from my bedside drawer (LOCKING DRAWER and WAS LOCKED). There was a fully loaded magazine, the holster and no gun. I have checked all around the bedroom and everywhere else to no avail. I haven't had anything stolen and distinctly remember placing the 'ol girl in the drawer Thursday night. No one has been in my place, no one has broken in and I never carry the thing on me or around the house, it always stays in it's drawer unless on my hip.

My place has two bedrooms (one is just storage ATM I rarely go in here) two bathrooms, kitchen, living room etc. It's well furnished and I have a ton of closet space/empty drawers. I'm relatively neat so there aren't piles for it to be hiding under. Checked under bed, both nightstands and all the drawers.

+10 internets to anyone who guesses (or predicts) where I find the bastard. 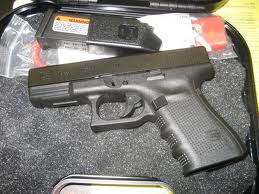 That's what it looks like, Glock 19 4th generation. Also, not in the gun case.

Also live alone and again, no one would have been in here to move it.

Ugh one more thing. It stays locked in the drawer, and I am (and I suppose you could argue this) responsible with the gun. I just lost a loved one and have been weirdly forgetful. Perhaps cool it on the horrible gun owner stuff though I do understand the critics.

It is the last place you left it or...

There! Now, there was some mention of a small reward I believe?


May I suggest, assuming you have a gun license, you report the missing gun to your nearest Police enforcement in case it shows up at some point that was used in a crime.

Living on your own or not, these weapons should be locked up properly and securely at all times.
edit on 19-11-2011 by bluemirage5 because: (no reason given)


I see it with a cloth of some sort. Partially wrapped or the cloth is draped over it. To me its a dish cloth or something like that. Light in color with possibly red or purple.


Ah Logic vs. Psychic ability. If you think no one has been in your house, then keep looking and when you find it, sell it or purchase a lockable gun cabinet. You are a hazard to yourself if you can so easily misplace a deadly weapon in such a tidy home. ?

I think you may find it there.

posted on Nov, 19 2011 @ 08:51 PM
link
Have you checked inside your upper kitchen cabinets? I have found many a strange thing I accidently stuck in there..Good Luck!

now i see it on the hood of a police cruiser.

now i see a call from the police and your gun confiscated as evidence.


I need to ask you how long it's been since you've seen it, or had it in your hands.

I'm asking this because I did a quick throw of the tarot cards, and to me they seem to indicate that the gun is with a young person, maybe a nephew or friend of a family member. It looks to me like this isn't the first time this person has borrowed your gun. This person seems to be wiley and wirey, and is a good talker.

It looks like its only being used for target practice, nothing sinister.....yet.

Hey, I could be totally and absolultely wrong, but it looks to me like its been borrowed by a youth.

Seriously though, I like these kinds of OPs too. Does anyone ever come through and deliver on the psychic/remote viewing thing?
edit on 19-11-2011 by The GUT because: (no reason given)


Oh ? Going for a "jog" and went to grab a lethal weapon lol?

Not sure what kinda jogs you go on , but if there like the ones i know of hope you don't find it . lol


j/k retrace steps , if retrace fails , then you got jacked. Someone has access to that apartment that you are overlooking

posted on Nov, 19 2011 @ 09:00 PM
link
I'm not a Psychic but try looking around by the head board maybe it slipped between the mattress and the headboard..or around the frame under the bed, up by your pillow only on the floor. Let us know where you do find it okay? I'm curious now where it might be. Good luck..and I agree with bluemirage5 if you don't find it..report it..short and true story real fast, I had a Beretta 9mm pistol that I kept in a case in my bedroom in case of emergency, one day I came home and noticed it was missing from the case. Seems my daughters boyfriend at the time needed some cash, stole my gun and sold it..I reported it to the Sheriff right away..and guess what..later that night I got a call from the Sheriff's dept. they found my gun. A guy down at the local bar had it stuffed down the back of his pants and shot himself in the a$$ with it. Anyway I got the gun back some time later..so cover yours just in case Cheers Coco


K it was on Wednesday night. I unlock the drawer, and check it every once in awhile. It was there, locked up and hid the key in the normal spot. Haven't played with it since, and it isn't in the gun case.


It's a condo and I'm the only one with keys. Aside from the property manager. Nothing is missing and the drawer stays locked.

posted on Nov, 19 2011 @ 09:10 PM
link
My sources reveal this whole thread is a sham, more so that you are approaching terminal cancer without even being aware. Good luck.

Originally posted by Domo1
Psychics Help Me Find Something I Lost


Its near a body of water.
I'm sensing an association with the color green, like a tree or a bush... but of course may just be a chair or some clothing.
I'm picking up the sound of "g.." or "h.." or possibily "b..". Maybe the name of a person who can assist you. Could also be the name of a place.


That's not very nice. Thread is not a sham, at least on my part. Be careful when you say stuff like that, sometimes someone has just lost a dear loved one and may be a little forgetful. Take that as you will. I'll take what you said as a joke though.