TextA mummified elongated skull found in Peru could finally prove the existence of aliens. The strangely shaped head - almost as big as its 50cm (20in) body - has baffled anthropologists. It was one of two sets of remains found in the city of Andahuaylillas in the southern province of Quispicanchi. The skeletal sets were discovered by Renato Davila Riquelme, who works for the Privado Ritos Andinos museum in Cusco in south-eastern Peru. He said that that the eye cavities are far larger than normally seen in humans. There is a soft spot in the skull - called an open fontanelle - which is a characteristic of children in their first year of life, yet the skull also has two large molars, only found in much older humans. Davila Riquelme said three anthropologists, from Spain and Russia, arrived at the museum last week to investigate the findings and agreed it was ‘not a human being’ and would conduct further studies. 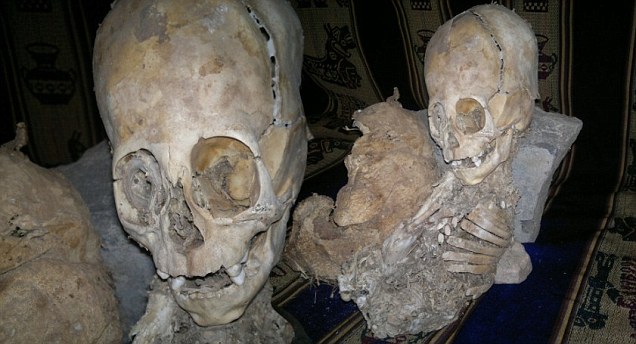 What's interesting to me is that these manmade, forced deformities were practiced in South America AND in countries on the other side of the oceans!
edit on 19/11/2011 by Trexter Ziam because: (no reason given)


Mummified elongated craniums have been found consistently, for many years, about 4 hours south of Lima, Peru in the Paracas zone near the mysterious Nazca lines. In essence the elongation of craniums was restricted to this particular area and not to the rest of the Inca empire. So starting right there makes this find extra unique. Why would these individuals travel so far, crossing the Andes mountains no less, if they belonged primarily to a fishing community existing around 500BC thus PRIOR to the Incas. Why go to the quispicachi province which is in the Cuzco zone this being the future capital of the empire?

What apparently is also very special about this find is the open fontanelle, extremely odd measure of eye sockets and elderly molars. To elongate a skull, the cranium must be modified by a constant procedure which takes many years. The open fontanelle, or soft spot, is present only in very young children. The overall skull size plus elderly molars being present makes this find very bizarre. Good find, op, keep us updated plox.
edit on 19-11-2011 by Snoopy1978 because: Rechecking facts...all clear.


You're right! It takes years.

I was born with an elongated (pointed) head (and was a blue baby), it took Mom 48 + hours to deliver me.

When a large-headed baby is born to a small-hipped Mother, that happens - but - the head reshapes to normal after a few days.

Possible hypothesis - if the newborn's skull is that maleable (as mine was and my Father saw too) - then, perhaps they could have bound a newborn's head.

Elderly molars - now that doesn't fit at all - but - I have read of fraudulant mummy altering for profit.

Originally posted by Trexter Ziam
This isn't an alien nor a giant. It is en.wikipedia.org... .

What's interesting to me is that these manmade, forced deformities were practiced in South America AND in countries on the other side of the oceans!
edit on 19/11/2011 by Trexter Ziam because: (no reason given)


Mmmmk did you stop to look at the huge eye sockets or the huge nose cavity or the huge mouth that are all in perfect context with the size of the head? Of course you saw all that you just decided to ignore it. No recorded cranial deformity/deformation in history has resulted in the eyes nose and mouth being in perfect context with the cranium and it doesn't really seem possible to me, deformities are just that, deformities. The being in the picture above was meant to grow to look that way it was no mistake. C'mon it's like, BAM, right in your face and what do you decide to do? Oppression, my friend, governments can't do it themselves they rely on ignorant people like you....


What about the molars then? The plates would have fused before those teeth came out. Also, I added a bit more info to my post above. It seems these two crossed the massive Andes mountains, apparently on foot as they did not have horses or vehicles, all the way to the future birthplace and capital of the Inca empire then died there. Strange.


I was going to agree with your post ... until I got to the name-calling. Two steps backwards for you. Don't pass "go", don't collect $200 and go straight to jail.

You are absolutely correct. The details of the lower cranium/face are apparently not disproportionate to the elongated upper cranium which happens when the modification is performed. I can only certify that I have never seen this before.


I think that the amount of disinfo shills and closed-minded debunkers is so high on ats lately that rational people are a bit jumpy. This find is definitely intriguing though.
edit on 19-11-2011 by Snoopy1978 because: (no reason given)


I agree. It's a puzzle inside a puzzle. A who dunnit.

Maybe other forums or even other ATS threads have researched it.
edit on 19/11/2011 by Trexter Ziam because: (no reason given)


It is a human only. Info about this with photos is abundant. Do your research. Your points are outdated and flawed because you did not. You be enlightened when you view and read the many, many articles with photos and explainations.

This form of "cranial binding" in Peru may very well be related to distant visits form E.T.'s though, as stated in the documentation you will find.


Ill keep tabs thats for sure.

posted on Nov, 19 2011 @ 04:28 AM
link
He explained that the mummies, covered by blankets, were discovered two years ago on the hill Wiracochan, two kilometers from the city of Andahuaylillas, more than 3,250 meters above sea level, but only made public the findings.

The non-human features is 50 inches tall, triangular head, large eyes and cavities in molars uncommon in humans, he said.

"It has fins two inches long and a half high at the bottom of the upper jaw, features not found in any ethnicity," he told Andina news agency .

The right eye, said, shows traces of the eyeball, which allow DNA testing to determine their genetic characteristics of the eye cavity of the left side is empty.

The bones of the rib and lower extremities (does not have the above) are very delicate and thin. In addition, the fontanelle (the space between the sutures of the bony plates of the skull with newborns) is open, but their molars correspond to the an adult. The second mummy, only 30 inches, has similar characteristics, but is incomplete because it has no face and is covered by a thin layer similar to the placenta. Both residues are found in the fetal position. Davila said a week ago three doctors (two Spanish and Russian) arrived at the museum and said "that would not be a human being", so agreed to come back to do some studies . www.andina.com.pe... I'm computer illiterate so I don't know how to make as quote or embed link sorry
edit on 19-11-2011 by douglas82391 because: (no reason given)
edit on 19-11-2011 by douglas82391 because: link fixed check it out


WOW! Now they are some damn weird skulls! I think they might possibly be Nephilim.


Yeah sir, but what about the eye holes??

posted on Nov, 19 2011 @ 04:29 AM
link
Also...the article should have explained to the readers that this is only the LATEST head of hundreds found the most recently. Then you would not have started this thread. You always can search ATS!

posted on Nov, 19 2011 @ 04:35 AM
link
The eye holes and mouth ears and nose will stretch proportionately in this process.

The research will show you this is part of history and not only in Preu.