Bill can we have some cheese with that Whine?

He starts whining about how he is being attacked.

But the truth finally comes out, right at the end, Bill talks about how people are attacking his book, then goes on to talk about false hoods and smear campaigns.

Can we get a triple Facepalm on this one?

But it's OK for him to disregard, make-up blatant mis-truths, and distort facts about Ron Paul?

Here are his books via Amazon and there was a thread recently on ATS talking about how people were sick of his propagada and that he was getting a taste of his own medicine, via Bill O'Reilly's books on Amazon.

It's funny because Bill sent troops overseas in Afghanistan a case of his books and look what happened. 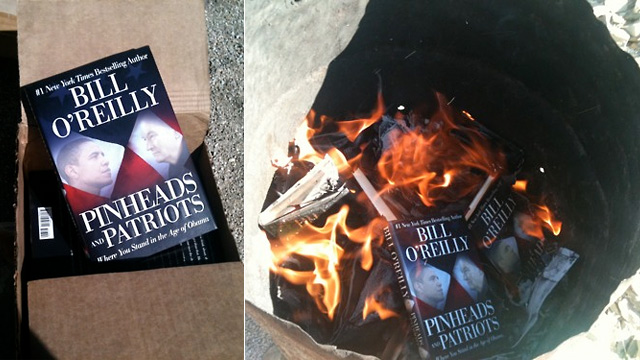 "Some jerk sent us two boxes of this awful book (SPOILER ALERT: George Washington — Patriot; George Soros — Pinhead) instead of anything soldiers at a remote outpost in Afghanistan might need, like, say, food or soap. Just burned the whole lot of them on my Commander's orders."


This guy does what many do...

Makes up an argument and then decidedly ignores all the fact they are withholding
from their pathetic little constructs. Mankind can sure be stupid, sad to say the O'reilly
effect is the name of the game for people who cling to their ideologies like religion.

posted on Nov, 18 2011 @ 03:52 PM
link
Seems to me that Bill's gotta decide if he wants to talk smack about people that other people like or if he wants to sell books. Seems his Ron Paul escapade has taken it's toll and now whiney baby comes out!


This must be what people call instant Karma.


Looks like Bill's in good company..here's another Fox News contributor with a knack for rewriting American history.

However..we do have REAL historians who won't them get away with it...Thank goodness

Nobody banned his book, in fact the place that supposedly did, released a statement saying they have it for sale (and they want him to come for a book signing event)...Arkin made flat-out false statements about what O'Reilly had supposedly said about her on his show, which he rightfully objected to...and he admitted there were some minor factual errors in his books (and a couple of typos)...which have been corrected.

Where is the hypocrisy you refer to?

Are you seeing/hearing something I am not?


I removed the part about banned book, because you are correct in part. What they did recommend is the fact the book not be sold there.
www.washingtonpost.com...


For a history of the assassination — an “unsanitized and uncompromising . . . no spin American story,” as O’Reilly and co­author Martin Dugard put it, “Killing Lincoln” suffers from factual errors and a lack of documentation, according to a study conducted by Rae Emerson, the deputy superintendent of Ford’s Theatre National Historic Site, which is a unit of the National Park Service. Emerson’s review recommended that the book not be sold at Ford Theatre’s store.

While the National Park Service does not carry “Killing Lincoln” in the theater’s basement museum bookstore, Ford’s Theatre Society, which operates Ford’s Theatre in partnership with the park service, sells the book in its gift shop in the ground-floor lobby.
.

The hypocrisy is the fact Bill can slight, distort, and remove people from his show, but if someone does anything close to what he does, he considers it a slight or wrong. Did you see the Ron Paul Poll dismissal video?


I am actually starting to think this is a publicity stunt to gain attention to his book.


There is not doubt that O'Reilly likes to create controversy...and loves to sell books.

He also spends an awful lot of time talking about how he is number one...and everybody is out to get him...etc. Again, creating controversy, chasing ratings and selling books.

When people do and say stuff like this, he loves it - and then takes an even bigger check to the bank.

posted on Nov, 19 2011 @ 03:26 PM
link
Bill O'Reilly is a complete sell out. Not only does he know whats going on but he actually enjoys it. This man is scum because its not ignorance that drives him. He used to actually be "Fair and Balanced", but now he points the finger and makes fun of anyone that has an oppinion on issues that he used to report on: