measuring the bubble around galaxies with hubble 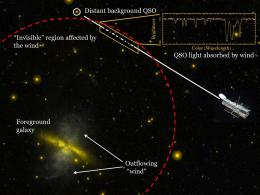 But Hubble's sensitive new Cosmic Origins Spectrograph (COS), the only one of its kind, has dramatically improved the quality of information regarding the gaseous envelope of galaxies, Tripp says. This huge gain in precision is one of the enormous accomplishments of the COS mission. "Even 10 years ago, most of the mass of a galaxy was invisible to us and such detailed investigations were impossible." the UMass Amherst astronomer points out. "With COS, in a sense we now have the ability to see the rest of the iceberg, not just the tip. This is a very exciting time to be an astronomer."

the gas envelope from a galaxy under study is giving insights into the "halo" type effect detected around most galaxies.

these are space bubble lenses at the galaxy scale.
and we are now exploring what the composition temperate and density of the bubble boundaries, allowing for a much more precise understanding of the compositional differences encountered at the boundry interface, this has implications on more precice mass light distrabution diagrams and of course the optical implications.

we can now say that our solar system is a bubble lens in a larger "galaxy bubble lens" with another bubble around that, and wind or gas outflowing from the center of a galaxy has an effect on the bubble interface.

With the new spectrograph we can see galaxy halos out to at least 150,000 parsecs," says Tripp. One kiloparsec is about 19 trillion miles. "Where once we saw only the framework we are now getting a more complete picture, including the composition and movement of gases in the envelope, varying temperatures in different locations and the chemical structure, all in incredible detail," Tripp adds.

In particular, data on the chemical composition and temperature in the gas clouds allow the astronomers to calculate a galaxy's halo mass and how the gaseous envelope regulates the galaxy's evolution.

Galaxies are the birthplaces of stars, each with a dense, visible central core and a huge envelope, or halo, around it containing extremely low-density gases. Until now, most of the mass in the envelope, as much as 90 percent of all mass in a galaxy, was undetectable by any instrument on Earth.

this is a very important discovery

this is getting very exciting..
xploder

posted on Nov, 17 2011 @ 02:44 PM
link
Thanks for the catch on this. My imagination has been firing ever since first hearing it confirmed by the Voyager probes that we're actually inside a giant bubble with our Solar System. I can't help but wonder what new truths and facts we'll discover as we get probes and sensors on the other side of that bubble interface and into interstellar space.

For instance, I wonder if we'll find distortion from the bubble has worked like the side mirror of a car. "Objects may be closer than they appear". Wouldn't it just be the news of a lifetime to learn that far from being so distant generational ships would be required, our neighboring stars are actually within reasonable distance in a single life time's trip? Perhaps we find some even closer. So many unknowns...but I'm happy to be alive during this time of history for THIS aspect, if nothing else. 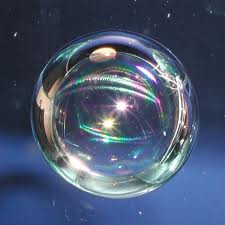 i have been working on just such a concept

its an exciting time to be interested in science

Well since you've put a little time in it and have more than a passing interest, I wonder what you're take would be on an idea I'd thought of, and it works with your thread here. Since we are rather ..challenged.. on effective means of propulsion to get out and see these things, why not steal a ride? Why wouldn't it work to fire a tether or similar concept into passing asteroids/comets to literally hitch a ride with sensor packages?

Within a few years, we'd have sensors flying in all directions, all over the solar system and out into the larger galaxy. Wouldn't that help in getting past these bubbles and seeing what exists in deep space, without the time required to build the technology and ships to get there in person?

Oh well... Don't mean to sidetrack.. Like I said, since first hearing about the bubble as a real tangible thing, my imagination has been busy when thinking about what may be out 'there'.


it's always an exciting time to be interested in science. I love it.