The English language is kinda stupid!

Don't you think that the English language is kinda stupid, too?
Here's how I came to this conclusion: I thought long and hard about a subject and wrote it down. It took about 1.5 lines of text.. Okay, I thought: where is the problem? Why does my thought lasts for only about 1 second of reading?

Because there are many short, really short words in the English language. Just look at this thread's title: "kinda" - what kind of word is this? Do you see the difference, if I translate that word in German: "irgendwie und möglicherweise".. 3 words, 25 characters vs. 1 word, 5 characters?! I miss using those good old German words like "Lockenwicklerstab" (hairdryer) oder "Donaudampfschifffahrtskapitänsmütze" (capns hat or whatever)! Yes, in Germany we have FUN playing "hangman" - it can go on for hours with ONLY ONE WORD!

Another problem is that there are so many different interpretations possible for short words.

And then we have those people who write as they speak. I really despise the use of the word "off" instead of "have" - yes, that happens! I agree, they SOUND alike. But do they even remotely LOOK the same?!


Okay, up to this point it was kinda funny, but now I come to a relevant problem: Figures of Speech.
Do you understand every figure of speech you encounter here or elsewhere in the internet? No, I don't think so, and do you know why that is? Because English has become a global language, speaken by far more people as their second language than those whose motherlanguage it is.

People using English as their second language tend to bring figures of speech from their first language into their English texts, so there is an amounting of individually colored expressions, each meaning something nearly incomprehensible to anyone not from the motherland of the speaker/writer.


Have fun with that one, [SNIP]! We stealz ur lingo and u sees what comes out of dat! ITS IMPOSSIBRU!

PS: There was some irony stashed into this posting.


This is why the English language is stupid: 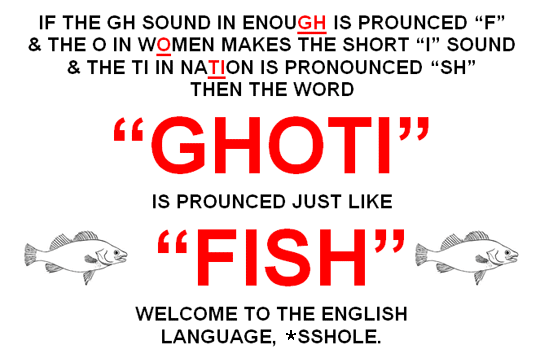 But having lots of short words is GOOD thing. Also having very simple letter symbols is a GOOD thing. Look at the Japanese or Chinese language, it's completely absurd. Writing one sentence would take me an hour.
edit on 17-11-2011 by ChaoticOrder because: (no reason given)

Other lingo's are usually way too cumbersome.

LOL, that was quite amusing.

You wouldn't find "kinda" in any dictionary..

Originally posted by Nosred
English is based on German.


BASED, Nosred, based! And then the world took it and made it a tool for everyone.. "If your only tool is a hammer, every problem looks like a nail." („Wer als Werkzeug nur einen Hammer hat, sieht in jedem Problem einen Nagel.“ Paul Watzlawick)
edit on 17-11-2011 by ManFromEurope because: typo

You wouldn't find "kinda" in any dictionary..

WHO'S YO BITCH, ENGRISH?!

posted on Nov, 17 2011 @ 01:54 AM
link
plain and simple if its too stupid for you then learn other languages and try and forget how to speak english

Will try to evade such words for my future postings.

Originally posted by ManFromEurope
Just look at this thread's title: "kinda" - what kind of word is this?

Originally posted by Nosred
English is based on German.

The English language is not based on German.

posted on Nov, 17 2011 @ 04:28 AM
link
The OP doesn't quite match the title, because the gist of the OP is "People who misuse the English language and get it wrong are stupid". Most of your complaint is about the fact that standard English is not being followed.
I would have been willing to agree with that.

posted on Nov, 17 2011 @ 06:34 AM
link
What we speak in America isn't even proper "English" if you ask a Brit. I think "American English" is so confusing because we are a melting pot of many cultures, each adding their own "twist"....I can see how it would be confusing. My step Mother was from Trier Germany, and she complained about this as well. Where I live, in Louisiana, our speech is heavily French influenced. We speak "English", but use French words regularly and on a daily basis. It is a big part of the culture here, with Creole and Cajun branching off from that.

posted on Nov, 17 2011 @ 08:59 AM
link
Eloquence and articulation are dependent on vocabulary and coherent thought, regardless of the language you use to communicate to others. The language you speak isn't near as important as how you speak it.

posted on Nov, 17 2011 @ 10:28 AM
link
it is a strange language, but most languages are, there will come a time in the future when we have a one world language that is simple and easy to use

Originally posted by DaveNorris
it is a strange language, but most languages are, there will come a time in the future when we have a one world language that is simple and easy to use


not quite sure about that, maybe.. i dunno.
but it makes sense that as technolagy evolves and we can comunicate more and more with the rest of the world that language would also develop and change so that we can all understand each other a lil better.