NYPD occupying Liberty Square; Demands unclear. Billionaire Mayor thought to be behind it.

New York, NY — The NYPD have been occupying Liberty Square since 1:00am Tuesday morning, with the brand new occupation now set to enter its second day in just a few short hours.

But will anyone listen to them when their message is so incoherent? "What are their demands?" asked social historian Patrick Bruner. "They have not articulated any platform. How do they expect to be taken seriously?"

Critics of the new occupation allege that meddling billionaire Michael Bloomberg is behind the movement. Others question the new occupiers' militant posture, concerned about the potential effects on the neighborhood.

Funny stuff. A movement with a sense of humor is nice. On the serious side though, how much is it costing to have these cops occupy the park, and for what reason? The protest continues and has outgrown Zucotti park. Bloomberg is likely doing them a favor.
news.yahoo.com...

Not one city has responded with any sense or conservative logic. They just echo the problem by throwing money and resources at it proving Occupy is right on with their messages.

Despite abuse in other cities I have to give the shame award to NY for using LRAD's on civilians.

Despite abuse in other cities I have to give the shame award to NY for using LRAD's on civilians.

Two questions on this.... Do you have any definitive links to an LRAD unit actually being turned on and directed at protesters.

I've carefully watched the videos of these being used in Pittsburgh by someone who had the camera behind and around the truck it was being deployed from. So excellent detailed views of what it does and how it's controlled. I've also seen the photos of the NYPD vehicles sporting the LRAD units on the roof. I just hadn't seen anything about them being used in NY with proof? I was listening to the GA feed last night when someone in the park started blaming everything from LRAD to EMP devices for an audio issue...but magically, that cleared up so another crisis averted.

What I'd really love is to see a video of it being turned on there. It's lower Manhattan. Basically a giant sound chamber with every angle of stone and concrete imaginable. Turning that on for it's offensive effects would be a real wild lesson in acoustics.
edit on 16-11-2011 by Wrabbit2000 because: typo

posted on Nov, 16 2011 @ 09:42 PM
link
8 months ago the US Government supported the Arab Spring, and the protests as being Democratic, going as far as to intervene when Arab Governments tried to stop the protest and censor the internet.

Forward 8 months. US Government suppressing Democratic protests and trying to now censor the internet with new legislation they vote on in a day or two.

When the revolution happens, weather it be by violent means or by voting, Congressmen have no one to blame but themselves and I hope every single one of them are brought to trial for sedition.


It was used, and not as a long distance P.A.
Give me a minute and I'll try to find you some links.

Here is a picture from Occupy NY. Give me a second on the links. 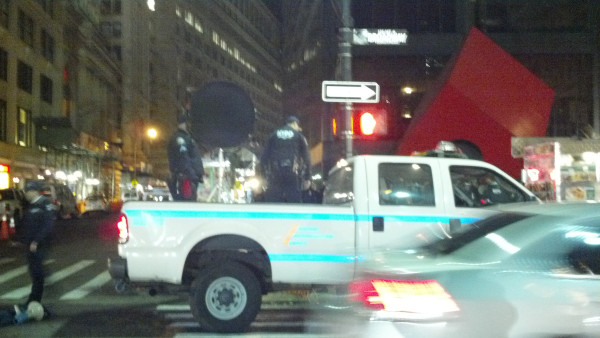 Also here is a link that has videos from all the coordinated evictions.
Occupy Evictions


I'm having trouble finding actual news sources, but it's worth noting that the media was banned from the area during the eviction. It was also reportedly used in Oakland. All I can find are first hand accounts from people describing being hit (instant ear draining, pain, etc).

I will keep looking. It has been used on the public before though, so I'm not really in doubt.


Yes.. I would have figured SOPA would have everyone in the streets with Occupy.
Info graphic for SOPA: HERE
edit on 16-11-2011 by GogoVicMorrow because: (no reason given)

posted on Nov, 16 2011 @ 10:59 PM
link
Thanks for the replies and information. That sure looks like the NYPD and that appears to be the same model right down to the mounting hardware for the unit featured on the You-Tube for Pittsburgh. Unbelievable. However I may feel about OWS or what it may do or become, there are limits to what any Police Department ought to be using.

Some hardware was made available under the auspices of counter-terrorism on that unlikely IF... American citizens protesting isn't quite what I think the public understood that definition to mean.

It would sure appear that the people who predicted every one of those systems would, despite assurances to the contrary, someday be turned on Americans were correct. That is disturbing if that trend continues. Most ATS people are probably aware that LRAD is just a step up the scale and not by any means the top of what is available for escalating crowd control. It gets much worse...if they really know no limits or discretion about what is deployed now. Then again... DHS is directing much of this now, so who knows....


Yep. Predators over our head for our protection. "Heat rays" and "Noise guns." We're in for a hell of a century.

LRAD's have a safety system, but it can be over ridden with the right knowledge and turned into a hell of a way to die.