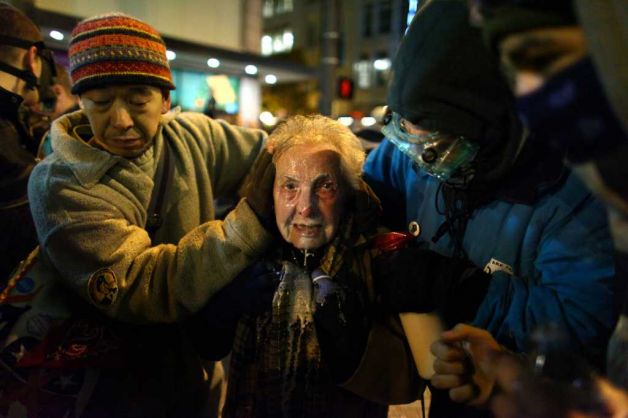 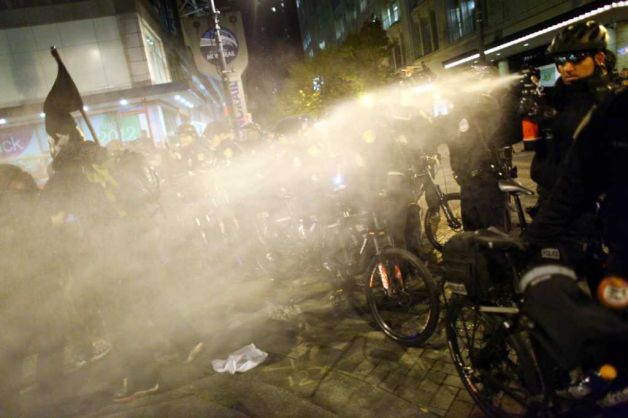 Seattle activist Dorli Rainey, 84, reacts after being hit with pepper spray during an Occupy Seattle protest on Tuesday, November 15, 2011 at Westlake Park. Protesters gathered in the intersection of 5th Avenue and Pine Street after marching from their camp at Seattle Central Community College in support of Occupy Wall Street. Many refused to move from the intersection after being ordered by police. Police then began spraying pepper spray into the gathered crowd hitting dozens of people. A pregnant woman was taken from the melee in an ambulance after being struck with spray.

While en route, they came across police officers at several points. At the intersection of Fifth and Pine, the crowd was met by a line of several dozen police officers on bicycles who blocked the way.

Tensions mounted until police deployed pepper spray in an attempt to disperse the crowd and get the protesters out of the streets. About a dozen people were hit with the stinging fume.

"Pepper spray was deployed only against subjects who were either refusing a lawful order to disperse or engaging in assaultive behavior toward officers," said Seattle police spokesman Jeff Kappel.

I understand cities want the protesters out, I mean who wants a bunch of people raising awareness about how corrupt our system is, right? Clearly the elderly woman was a threat to police and society.

I don't understand this game cities seem to be playing, the police are ordered to use force, then they go overboard and the cities back down and appear to switch to support mode and then they crack down again. Maybe the politiicans are in a tailspin because they are being exposed for the filth they are.