Another species invasion! At least this one appears edible.

posted on Nov, 16 2011 @ 03:04 PM
link
The Tiger Shrimp is native to southeast Asia, Australia and the Philippines, but it has found its way to the Mississippi Sound and more.... 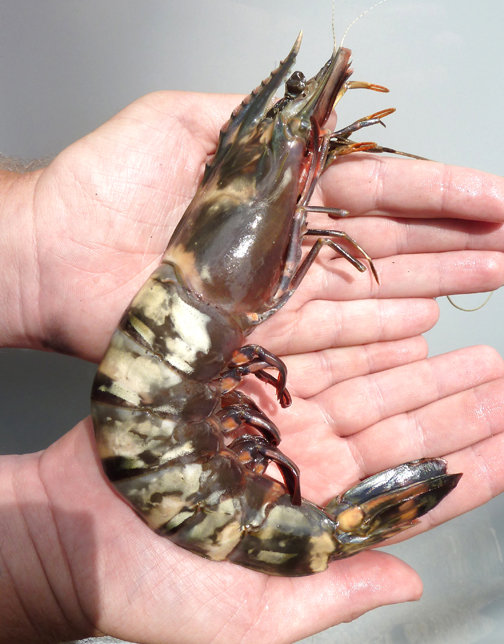 This beauty appears to have tiger stripes until you cook it... when they turn red.

BILOXI -- The Asian tiger shrimp has invaded the northern Gulf of Mexico and the Mississippi Sound.
But officials at the Mississippi Department of Marine Resources said there’s no immediate reason for concern at this point in time.
“Most of the reports we’ve received lately have been from fishermen working in Louisiana and landing their catch in Mississippi,” said Mike Pursley, Aquatic Invasive Species Coordinator and Field Project Manager for the DMR.

The article says that the tiger shrimp has been found in Louisiana, Alabama, Florida and the Carolinas.

Let's hope this isn't another death knell for the local shrimp which have to compete for food in the environment... I suspect these tiger shrimp eat way more than they do.
edit on 16-11-2011 by Maxmars because: (no reason given)

However, Eating these "that I assume have come from the Gulf of Mexico", could still be hazardous???
Correct me if I'm wrong.

Likely to be bad for the local shrimp, but maybe with people eating them, their numbers will stay down?

posted on Nov, 16 2011 @ 07:25 PM
link
Yes, the first ridiculous thought that ran through my head when I saw this beastie was that it was some kind of corexit mutation..... still, I hope they check these babies out before they cook them up.... I am ignorant enough on the subject to hold all of the Gulf of Mexico ecosystem as suspect when it comes to food.

posted on Nov, 17 2011 @ 06:50 AM
link
Species invading different areas cant be helped , its the natural order of living things on this planet. The strongest survive. I dont think its up to us to decide whether one species should live or die.

posted on Nov, 17 2011 @ 07:55 AM
link
I volunteer to lead an advance-team out in order to cull this invasion! Everyone must bring their own nets.

Later we will drink beer and have a boil

Originally posted by PhoenixOD
Species invading different areas cant be helped , its the natural order of living things on this planet. The strongest survive. I dont think its up to us to decide whether one species should live or die.

Yes but it seems highly unlikely that there's a 'natural' cause for an Asian shrimp to show up in the Gulf of Mexico.

Unfortunately, it also seems highly unlikely that once such genies are out of their bottle, they can be put back in again.

I feel nature has ways of fixing itself. the animal life of Earth carry energy fields these fields help balance the overall energy of Earth. With that some of the animals effected in the GOM may have dropped energy levels or frequency due to the destructive effects set upon the sea life in the GOM from the --spill- So nature may be repairing itself by sending new and stronger animal life in that region to manage the frequency there. Now many may say "FREQUENCY" how that sounds like the new age hippie crap smh but to explain in physical for those who need it. The frequency effects are related to animal / sea life intake and output as their eating habits within the gulf may have changed the native sea life that is. So the native shrimp may not be able to eat and spawn and refertilize the gulf in the original way physical effects effecting the electro frequency. And now replacements have been placed within to upkeep. To go further IMAGINE THIS occurring WITH OTHER SPECIES ON EARTH WHERE FREQUENCY DROPPING MAY OCCUR, SMH.....


Ah , of course. I didnt read the whole article