page: 1
67
<<   2  3  4 >>
log in
join
share:
thepresenttense
+31 more
posted on Nov, 6 2011 @ 10:00 AM
link
I did a search, but haven't seen any other posts on this yet. Please forgive me if I've been unknowingly beaten to the punch. I just saw this story on MSNBC.com and wondered if anyone here has any ideas about it or access to more and/or better photos of this white rock "vein". I find it very interesting how perfectly separate it is from the rocks and soil around it. Scientists, so far, seem to be stumped, and so am I. Any ideas on what mineral would do this? Do we have similar examples on Earth?

NASA's Opportunity rover has come across a light-colored line of rocks that could serve as solid evidence for Mars' watery past — and help set the stage for the next Mars mission, due for launch this month. The formation, nicknamed "Homestake" or "The Vein," showed up in pictures that the rover sent back from the rim of Endeavour Crater early this week. It looks like a few paving bricks, sticking edge up from the surrounding soil. Not all that impressive, but it caught the attention of the rover science team as well as the amateur observers who are following Oppy's every move.

source
edit on 6-11-2011 by thepresenttense because: Mods, please move this to the correct category if necessary

Aestheteka
+7 more
posted on Nov, 6 2011 @ 10:07 AM
link
Brilliant find!
I love the way they say they look like a row of paving bricks and aren't that impressive.
It's fricking Mars!
I bet even Rover let out a "WTF?"
Of course, it's just evidence of water in Mars' distant past.... my posterior...
If anyone's ever seen the UK series Time Team, they manage to reconstruct entire Roman villas on less evidence than that....

posted on Nov, 6 2011 @ 10:08 AM
link
Interesting article. TY for posting. What I find even more interesting is the use of the word "homestake" to name the new find. Use of that word implies to me, at least, future plans for a Mars base, or homestead. Or, they think the row of stones looks more like an ancient foundation......
edit on 6-11-2011 by Destinyone because: (no reason given)

posted on Nov, 6 2011 @ 10:08 AM
link
It kind of looks like intelligent structure that's been buried over time with erosion.
I'm just glad they aren't screwing with red filters like they use to.

Great catch.
I'm sure there is more to be "Discovered" as time goes on. I personally cant wait until they get the next generation

posted on Nov, 6 2011 @ 10:17 AM
link
Just found more pics on the rovers' web site. There are quite a few, so I'll just post a link. If anyone has a comment on a specific pic, I recommend posting the pic with your comment.

Originally posted by thepresenttense
Just found more pics on the rovers' web site. There are quite a few, so I'll just post a link. If anyone has a comment on a specific pic, I recommend posting the pic with your comment.

Great catch.
I'm sure there is more to be "Discovered" as time goes on. I personally cant wait until they get the next generation

posted on Nov, 6 2011 @ 10:39 AM
link
These images are intriuging, not sure what to make of it though. I always love images from Mars, the moon, etc and just gazing at them knowing that i'll likely never see it with my own eyes, but hoping.

Unfortunately, until an astronaut/anthroplogy team actually makes the trip to study and excavate these findings, these images are all we will ever know about the new formation.

Originally posted by Aestheteka
Brilliant find!
I love the way they say they look like a row of paving bricks and aren't that impressive.
It's fricking Mars!
I bet even Rover let out a "WTF?"
Of course, it's just evidence of water in Mars' distant past.... my posterior...
If anyone's ever seen the UK series Time Team, they manage to reconstruct entire Roman villas on less evidence than that....

I agree but probably not impressive compared to what they already know or have already seen there! Come on! There was life on Mars at some point in time! It's not that unbelievable!
edit on 11/6/2011 by maddog99 because: (no reason given)

Thanks to the link to the Rover's page, here is my version of the image, slightly less yellow than the one already posted. 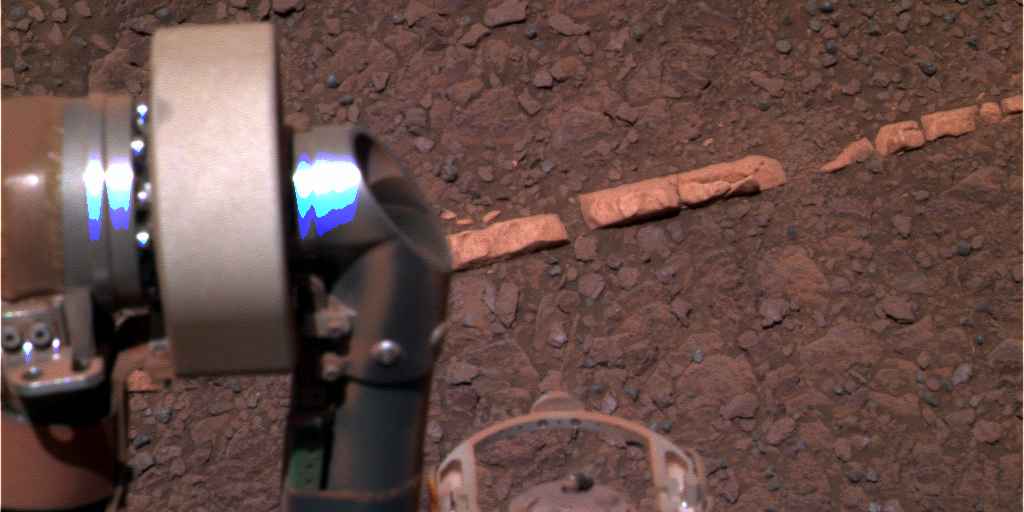 And a version with some colour corrections that I noticed that make things look closer to the photometrically corrected images, meaning that it looks closer to what it would look on Earth. 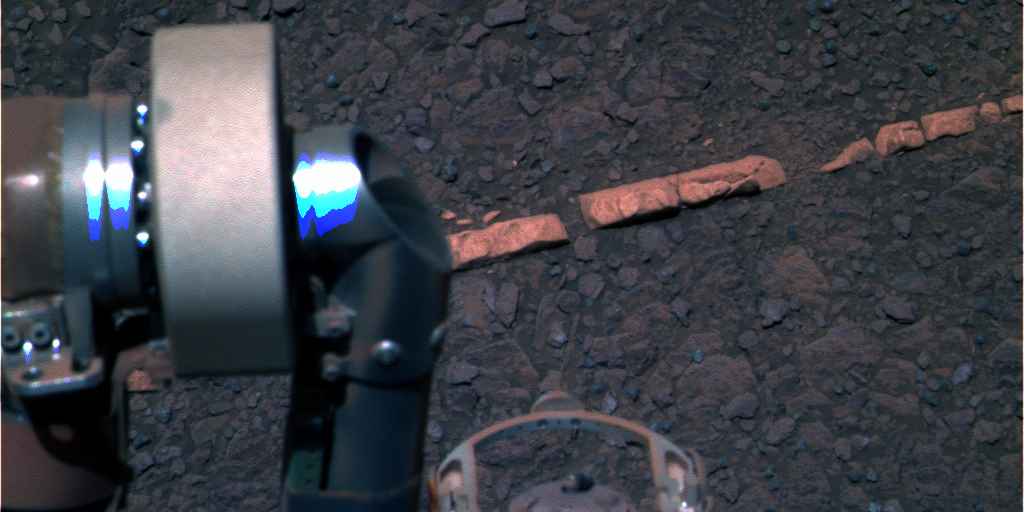 posted on Nov, 6 2011 @ 11:11 AM
link
I have a hard time believing there was an intelligent civilization on mars. Yet this formation is just strange. Each of these segments is not only the same width, but pretty much the same length. Its easy to see a pattern could have existed that has simply eroded.


I know they are saying they think this particular formation was caused by some kind water deposit, but water doesn't typically flow in a perfect rectangle in a perfectly straight line...

I dunno when I see things like this is makes me wonder...

Originally posted by Aestheteka
If anyone's ever seen the UK series Time Team, they manage to reconstruct entire Roman villas on less evidence than that....

If they did then they were using too much imagination.

That really looks like a natural formation, and very similar to the one on the image below.

posted on Nov, 6 2011 @ 11:44 AM
link
My problem with this is people are thinking like Earthlings so they project Earthling "engineering" on anything they see.

Waterway? looks like bricks to me any "alien" civilization would they use the same technology as us?

Don't think they would.

posted on Nov, 6 2011 @ 11:47 AM
link
It could be a similar geological process that surfaces the Mars spherules (blueberries). They have been observed to emerge on stems, before erosion separates them and erosion smoothes them. I couldn't find the best illustrations in a brief search but I will have to make the best I found do.

posted on Nov, 6 2011 @ 11:49 AM
link
If some are speculating that these are remnants of an artificial structure or engineering of some type then we are talking about Extra terrestrial life. If so, there is nothing to say that they were built by "indigenous Martians" but rather possibly by visitors to the red planet in the past....

posted on Nov, 6 2011 @ 11:53 AM
link
Like I keep pointing out, we were 'shocked' to discover people in the New World. We were 'shocked' to discover people in Asutralia.
I have a real feeling that we'll be finding people, as well as aliens, all over space.
Just look at Earth. If you were going to plant a colony somewhere in this neighbourhood, Earth would be the first choice. Except that Mars looks like it used to be somewhat similar so perhaps there were two locales.
I've seen hundreds of Mars images which scream artificial construction. I wasn't joking about the Time Team reference. Have any of you ever seen just what fragmnets of neolithic pottery look like yet we are capable of reconstructing them in their original form.
Prehistoric (and even post-Roman, e.g. Saxon) buildings were constructed from natural materials, nothing of which usually survives, yet we can reconstruct them from shading in the soil.
ANY straight line of virtually identically-sized 'bricks' is not evidence that there might be minerals which might suggest that there was water N trillion years ago - it is indicative that someone or something shaped them and put them there. The fact that it is being referred to as 'Homestead' and not 'Body of Water' or 'Lakefront' should be quite a large clue....
Again, there is even a misdirection with the comicasl dinosar skeleton. This is to unconsciously steer your vision to what could be 'below' the soil line as opposed to what was most likely 'above' the soil line, e.g. an artificial construction.


Any civilization which has progressed beyon hunter-gatherer and has begun making semi-permanent dwellings uses local materials to construct its dwellings. This is why we have such a variety of building materials in our past such as peat, stone, brick (where clay was plentiful but stone not), etc.
An alien civilization, unless constructed from light beams or ether, etc, would also have to rely on local natural materials in its youth.
It could move on to glass structures like on the Moon only when it had progressed a tad