posted on Nov, 4 2011 @ 09:48 PM
link
I was reading an article today about the random arrest of OWS protesters, about how they are arresting pretty much anyone that looks like a leader, but don't they know all these sheeple lost there shepherds along with there jobs, but it's a good thing they got plenty of wolves running about now, funny how even the dumb pig in wolf-skin can't see that even the sheep can belt for them too.

BTW anyone else think it's odd that we use and Ass and an Elephant for our main parties, i mean where the hell the American animals at?

alas I'll end with with GO socialism, cause i know how even on ats so many fool are ignorant about the subject believing their(government's) propaganda and such, and at least someone will argue with me so i can shut them down and get some post i mean really whats wrong with socialism and please don't say china, cause that like saying we represent capitalism.No we represent a broken train track that somehow hasn't wrecked
edit on 4-11-2011 by Jubosh because: (no reason given)

posted on Nov, 4 2011 @ 10:48 PM
link
OWS should turn into independent communities in the outskirts exempt from bs unconstitutional laws. It should also be protected by armed citizens. Start up a community, with a farm, water supply, irrugation system and day to day operations that work completely outside of government and within the u.s constitution. You would eventually get the support of alot of people without all the mess on the streets. The worst thing for these wall street a-holes are people that are not servants to the system. It would demonstrate the same point but with alot better living conditions and no reason for the police to even be tempted to move the demonstration.

There are alot of cons to this type...but i think it is worth a try. Get back to the basics. Food, water, sanitation, communication and irrigation. Every one could be happy in the presence of good people....without blackberries computers and tv.


welcome aboard
being an anarchist and a sovereign individual [in the Nietzscheian sense], i'll give the socialism debate a miss, other than to say it can only work in small to medium communities on a national level it becomes quite the Tyrannosaur, just ask the victims of the cultural revolution or the Tibetans.


Why Occupy? Why Tea Party? Why Protest? Simple; The US economy is broken. Incomes are less than they were 35 years ago. Everything costs more. We've had 17% unemployment (traditional measure) for 2 years and we're about to lose many more jobs.. Our collective debt is 370% of our GDP (from all sources, from consumer to gov't). Our financial system has a) enabled the transfer of our manufacturing jobs to a mercantilist (managed trade) China and b) stolen the rest of our wealth (and is in the process of gambling what's left of it away). Finally, given the ongoing instability of our economic system, we don't have long before the entire thing fails and with it our collective future (rich or poor). The question really is: why aren't you protesting? why isn't everyone protesting? 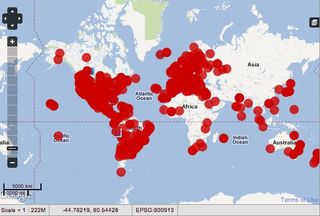 
How to Create an Occupy Tribe: globalguerrillas.typepad.com...

There's no question that the Occupy groups have done a great job with constructing the outlines of resilient communities in the heart of many of our most dense urban areas.

People pitch in to do work. They are considerate despite the difficulty of the arrangement. Food gets served. The area gets cleaned. There is entertainment. There's innovation (equipment, tech, workarounds). There is education (lots of seminars being taught). There is open, participatory governance. All of this is great and this experience will definitely pay off over the next decade as the global economy deteriorates, panics, fails. It will make building resilient communities easier (there are lots of ways to build a resilient community, we're trying to document all of the ways how on MiiU).
However, is this experience building a tribal identity? An Occupy tribe? Something that can eventually (there's lots to do in the short to medium term) go beyond protest and build something new? One even strong enough to create new resilient economic and social networks that step into the breach as the current one fails?

A resilient community is a place that produces most of what it needs locally. It connects virtually for everything else. It's a vibrant local economy as well as a community that is immune to a) global depression, b) political instability, c) shortages, famines, etc., and d) most effects of natural disasters. In short, it's resilient.

MiiU is a collection of all the resources and places that make personal, family, and community resilience possible. Resilience isn't only about surviving global failures, it's about building a better life for you and everyone around you.

self-defense against the parasites in control of the system attempting to drag the escaped slaves back to the plantation, of course does not constitute violence