posted on Nov, 4 2011 @ 03:40 PM
link
in a new use of density gravitational lensing, evidence of a process called gravitational microscoping has been used, (galaxy to galaxy lensing in the article). and gravitational macrolensing of the magnifyed source. 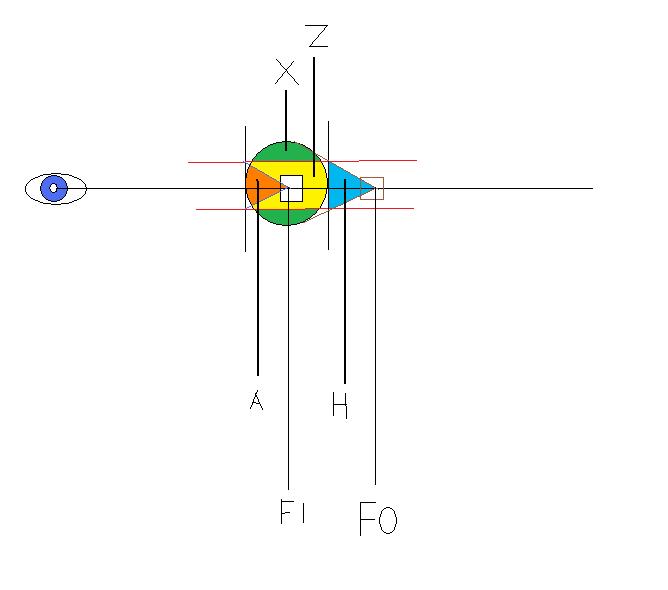 The team therefore used an innovative method to study the quasar: using the stars in an intervening galaxy as a scanning microscope to probe features in the quasar's disc that would otherwise be far too small to see. As these stars move across the light from the quasar, gravitational effects amplify the light from different parts of the quasar, giving detailed colour information for a line that crosses through the accretion disc.

this process uses a foreground galaxy to gravitationally "microscope" very fine details from a "back round" quasar, 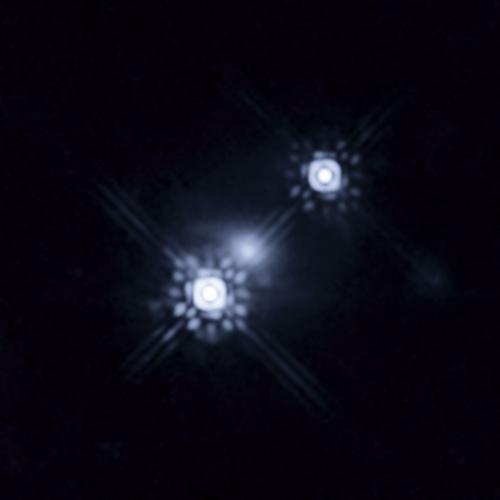 This picture shows a quasar that has been gravitationally lensed by a galaxy in the foreground, which can be seen as a faint shape around the two bright images of the quasar. Observations of one of the images show variations in color over time. This is caused by stars within the lens galaxy passing through the path of the light from the quasar, magnifying the light from different parts of the quasar's accretion disc as they move. This has allowed a team of scientists to reconstruct the color and temperature profile of the accretion disc with unprecedented precision. The level of detail involved is equivalent to being able to study individual grains of sand on the surface of the Moon while standing on Earth. Credit: NASA, ESA and J.A. Muñoz (University of Valencia)

using the gravitional potential of the foregroud galaxy, and the suns within that galaxy scientists have been able to "see" the acreation disk surrounding a super massive black hole.

(PhysOrg.com) -- Scientists have used the NASA/ESA Hubble Space Telescope to observe a quasar accretion disc -- a glowing disc of matter that is slowly being sucked into its galaxy's central black hole. Their study makes use of a novel technique that uses gravitational lensing to give an immense boost to the power of the telescope. The precision of the method has allowed astronomers to directly measure the disc's size and temperature across different parts of the disc.

An international team of astronomers has used a new technique to study the bright disc of matter surrounding a faraway black hole. Using the NASA/ESA Hubble Space Telescope, combined with the gravitational lensing effect of stars in a distant galaxy, the team measured the disc's size and studied the colours (and hence the temperatures) of different parts of the disc. These observations show a level of precision equivalent to spotting individual grains of sand on the surface of the Moon.

so this powerful new tool is allowing us to,
macro (large) lense the image with the gravitational lensing foreground galaxy, and as each star passes the path light takes it micro (small) lenses the light.

this allows for a huge magnification of the acreation disk,

so this new tool will enable us to syudy the composition and make up of acreation discs, something we could not see before.

this can be thought of "lenses within lenses"

the larger lens allows an increase in brightness and magnification, an image on the galaxy surface.
while the smaller lenses imbeded within the galaxy bend (micro lense) the light that has been collected by the larger galaxy lens.

this has the effect of a "microscope" think two lenses factoring their effects together to give the ability to act very similar to a microscope.

the gravitational microscoping previously described on ats here works on a different principal to the one described in the article. 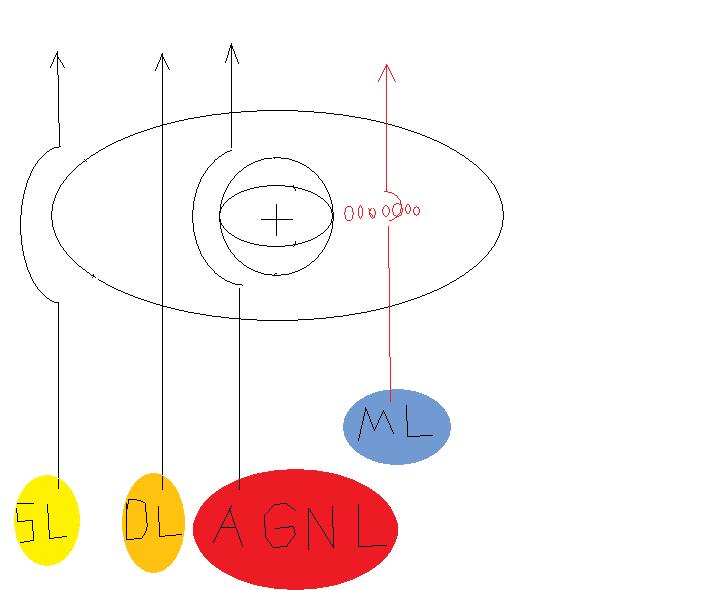 in this case the DL and ML combine to microscope the backround quasar, and as the stars "move" passed the line of sight, each star micro lenses the light as they transit (bends light around the star)

this has an effect on the "image" of the backround quasar and enables us a much better view of the composition of the acreasion disc.

i had proposed this type of lensing before in this thread here
are quasars reflections from black holes?
link to ATS thread


the new question to consider,

if stars in a foreground lens can microscope the acreation disc of a galaxy,

what happens if a cluster of galaxies preform the exact same function, except in this scale the galaxies represent the indivdual stars and the cluster represents the individual galaxy. 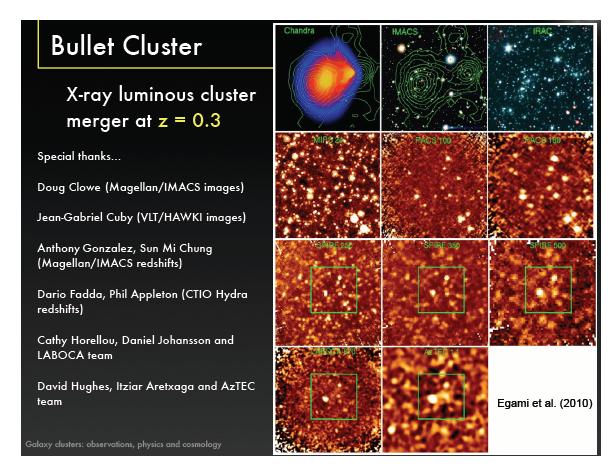 would a galaxy cluster at this scale have the same microscoping potential?

this discovery gives new tools to investigate the universe and gives us the ability to see and study something which was not available to see before.

this can have the potential (pun) to enable scientists to test theories and build a better understanding of galaxy composition and structure.

posted on Nov, 4 2011 @ 03:46 PM
link
that is one astounding photograph =O I guess its about time I admited black holes are 'real' then >_> (ignoring the negative pressure gravity well thing a moment, its there, it does things, it exists.)

soo was this at sagitarius A* or somewhere else entirely? s&f for you op ^_^ im gunna be in space mode all week now.


Seriously, brilliant post!
Still trying to understand it, but I'll get there.
S&F.

Originally posted by whatsinaname
that is one astounding photograph =O I guess its about time I admited black holes are 'real' then >_> (ignoring the negative pressure gravity well thing a moment, its there, it does things, it exists.)

soo was this at sagitarius A* or somewhere else entirely? s&f for you op ^_^ im gunna be in space mode all week now.

although there is no mention of where or what the foreground galaxy is or even where the backround galaxy is,
i can say that this form of microscoping only works for other galaxies that we look at from our galaxy.
the effect only works if you are "exterior" to the galaxy.

i too wounder if this is the first "direct image" of the center of a galaxy?

Originally posted by BrianDamage
Video or it didn't happen!!!!


Seriously, brilliant post!
Still trying to understand it, but I'll get there.
S&F.


there is a video explination on the source link given,
it shows the micro lensing of light as it travels "through" a gravitational lense made from density/gravity,
and as a star in that galaxy "gets in the way" of the light ray, it deflects the light and measurements of the deflections and spectra of light can be used by a computer to "disentangle" the light to gain more knowledge on the composition and "look" and dynamics of the central reigion of the galaxy (backround) that is being magnifyed by the foreground gravity lens


here is a diagram of how the galaxy density gravitational lensing works, 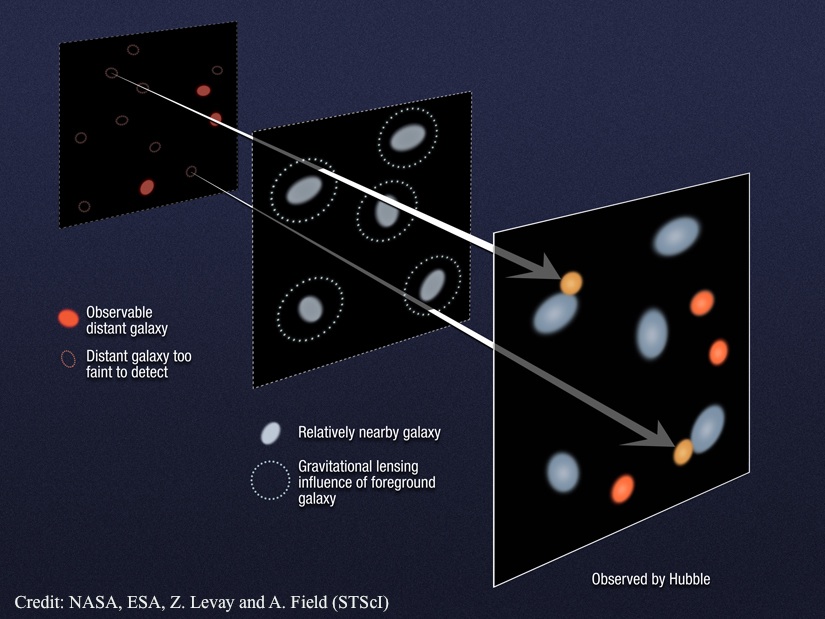 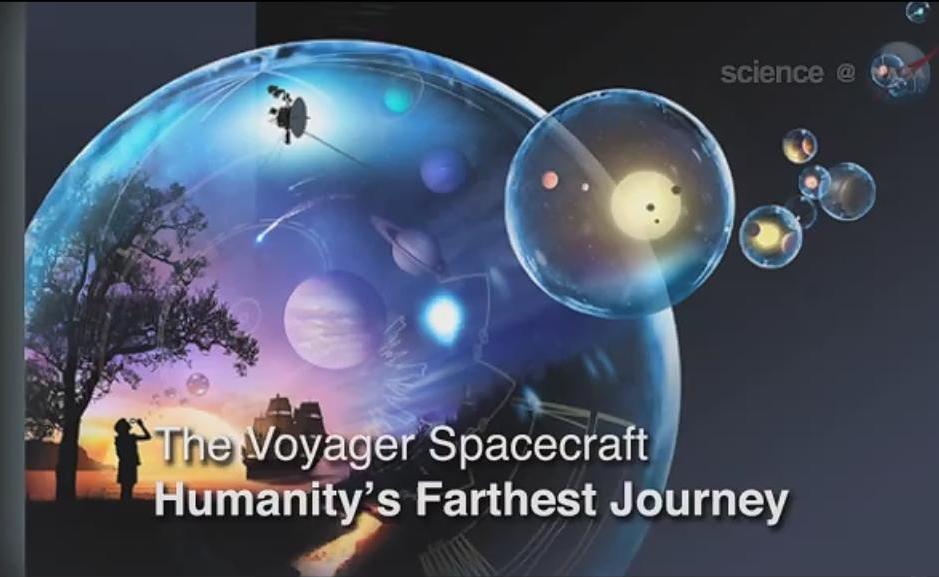 
This result is very relevant because it implies we are now able to obtain observational data on the structure of these systems, rather than relying on theory alone," says Muñoz. "Quasars' physical properties are not yet well understood. This new ability to obtain observational measurements is therefore opening a new window to help understand the nature of these objects."