US Marine whistleblower: "Prepare for the end of the world"

An interesting Federal Security Services (FSB) report circulating in the Kremlin today states that the United States was thrown into a “panic” last week after one of its soldiers emailed his mother warning her to “prepare for the end of the world.”

According to this report, American Army Specialist William Millay [photo 2nd left], a 22-year-old military policeman from Owensboro, Kentucky, stationed at Joint Base Elmendorf-Richardson in Alaska had “growing concerns” over the massive military buildup by the US Northern Command (NORTHCOM) of troops and equipment being secreted through his base from Afghanistan, Japan and South Korea headed towards “staging areas” throughout America.

In a series of emails and phone calls to his mother, and other family members living in Kentucky, this report continues, Specialist Millay relayed his concerns and when asked by them of what preparations they should make he replied, “Prepare for the end of the world.”

Hmm, perhaps just another bogus false alert? Paranoid fearmongering? I was dubious on the credibility of this article and of the soldier's claims. Then I read this:


A U.S. Army specialist who was serving as a military policeman has been arrested at an Alaska military base on suspicion of spying.

Why would the FBI be placing such heavy charges unless the man's claims truly did hold water? Heads up, friends.
edit on 4-11-2011 by RenegadeScholar because: (no reason given)
edit on 11/4/2011 by tothetenthpower because: --Mod Edit--EXE Tags

Soldiers “End Of The World” Email Sends US Into Panic

after one of its soldiers emailed his mother warning her to “prepare for the end of the world.”

There isn't much evidence or mention of such an email to be found at the more reliable sources. Who knows.

Hope his mum has plenty of baked beans just in case

Nice link but anything by Sorcha Faal deserves many pinches of salt and full frontal lobotomy.

Everyday is the end of the world according to them.

Got it in one

posted on Nov, 4 2011 @ 04:11 AM
link
My guess is that he was arrested because he sent unauthorized communication about troop deployments. Not only once but several times.

posted on Nov, 4 2011 @ 04:22 AM
link
He could have known he was about to be busted and that the Media will all be camped out in his families yard for a week or two.

That could be his version of "The end of the world" for them.

But it does have a short time span, don't it?

Originally posted by RenegadeScholar
Why would the FBI be placing such heavy charges unless the man's claims truly did hold water? Heads up, friends.


I don't know what it means, but the story of William Colton Millay being arrested, is not a hoax. The news is on washingtonpost, reuters, cnn, msnbc, and on more than 300,000 other results. 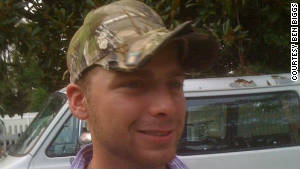 FBI spokesman Eric Gonzalez said Millay's arrest had no connection to WikiLeaks. Nor did it involve any transfer of information, Coppernoll said. "While we can't go into any specifics, this is completely different than the Manning case in that it does not involve the transfer of data on computer networks," he said. Coppernoll said any information that might have been transferred was stopped and that "Millay was being observed well before any damage could have occurred."


The question is, why was he arrested AFTER he allegedly send an email to his mother, advising to 'prepare for the end of the world'? If there never was any email in the 1st place, where did the story about the email come from? How did Sorcha Faal got to it? Why would Faal made up this email story about this one particular person?
edit on 11/4/2011 by Cerridwen because: (no reason given)

So he's a junior enlisted soldier in the US Marine Corps under surveillance by the Russian internal security service, whose reports are read by a web site called whatdoesitmean.com, and his job as a junior MP gives him knowledge of which COCOM various forces in the US are assigned to and where they are stationed. Is that right? And we know this is true because a couple details were taken from reports of a soldier who was arrested several days before this story was published? I don't think this story is quite ready for prime time.


Because he always does...

All of his stories are extremely exaggerated if not completely false.

Sounds like an interesting story though, who knows even Faal can stumble upon the truth..but most likely not.

posted on Nov, 4 2011 @ 05:25 AM
link
Most of the following articles state much of the same, but that being said these are msm reports. There must be some kernel of truth here.

posted on Nov, 4 2011 @ 05:48 AM
link
Have any of the Sorcha Faal reports actually been proven false though? Just because they are never heard about again from msn, does not make them false.

So far, from what i have seen, it may all be true, just stuff that are really top secret and where a lot of resources are put to quiet down, asap.


Sorcha Faal. Not to be believed. The creed Faal follows is the following: When in doubt? Make stuff up.

The arrest did indeed happen. That's where the truth and Faal usually part ways...
edit on 11/4/2011 by seagull because: (no reason given)

posted on Nov, 4 2011 @ 08:42 AM
link
Why does the title say us marine when this is not true. Please learn your ranks and services better before posting please.


Too funny. Does Sorcha Faal read ATS? I only skimmed the article, but


redeployment of these tens of thousands of US troops to the American Homeland was “somehow” related to the 9 November nationwide testing of the United States Emergency Alert System (EAS) that is occurring “coincidentally” with a vast number of disaster drills and exercises being planned for the same time period.

I've read a lot about the drills on ATS.
People here on ATS have been talking about excessive troop movements throughout the states, and how suspicious it seems to them.

US Northern Command (NORTHCOM) of troops and equipment being secreted through his base from Afghanistan, Japan and South Korea headed towards “staging areas” throughout America.

Plus the amount of people looking at the current situation about the deployment of Turkish troops to Syria, and the US/UK readying to attack Iran, and expecting WWW3, and mutual destruction of all.........
That could be the end of the world

I think Sorcha takes some "truthiness" from stuff, and the only thing needed to make a scary situation a complete hoax, is to get Sorcha to put it into print.