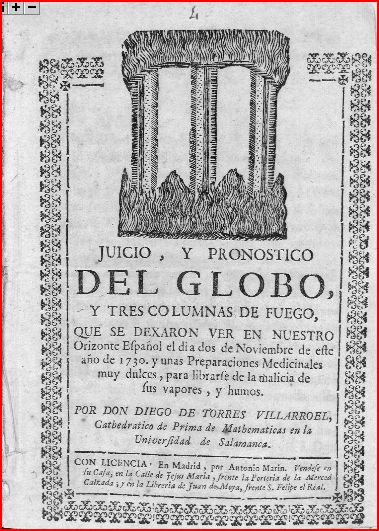 The title, translated would be something like : "Judgement, Globe forecast and three columns of fire seen on our Spanish horizon on November 2, 1730".

I enjoyed a lot this one, there are 2 spanish gentelmen discussing about a phenomena that took place in 1730, in Spain. They were very similar to us, ATS members, believers and skeptics.

I won't be able to translate the full document. It took me a while to understand it (I know spanish very good), since this is an old version of the language, very different from the one spoken today.

Anyway, here is the most interesting part : 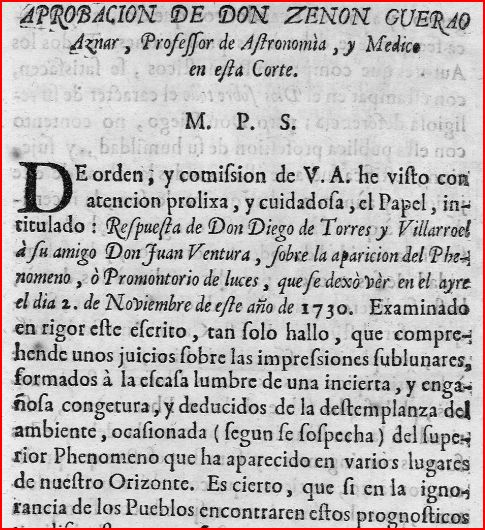 APPROVAL OF DON ZENON Guerao AZNAR, Professor of Astronomy and doctors of this Court.

Order, and commission of V. A. I've seen neat and careful attention, the paper entitled: "Response of Don Diego de Torres Villarroel and his friend Don Juan Ventura, on the appearance of the phenomenon, or promontory of lights that showed up in the air on November 2 1730. Looking at it strictly speaking, only hallo, comprising some judgments about the sublunary impressions formed in the low light of an uncertain and misleading conjecture deestemplanza deducted from the environment, occasions (as suspected) the phenomenon than that has appeared in various places on our horizon. it is true that if ignorance was willing these forecasts as always, would be credulity because the author has proposed that aceveracion, that the writings of such categories, so just right. .... 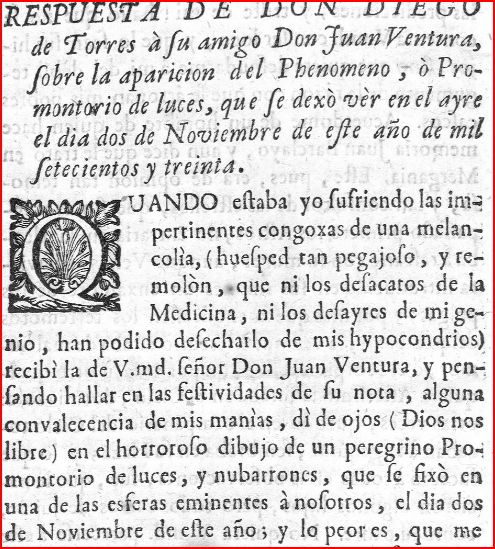 Response of Don Diego de Torres to his friend Don Juan Ventura, on the appearance of the phenomenon or Promontory of lights that showed up in the air on November 2, 1730.

...... in the horrific picture of a pilgrim promontory of light and clouds that are set in one of the spheres in front of us on the 2d of November of this year ....

You can check the rest here :

posted on Nov, 1 2011 @ 06:00 PM
link
well it sounds interesting, even if it wasnt an E.T. ufo, it seems as though they did see some type of anomaly. I love these old articles. Not a lot of BS in these, they usually described exactly what they saw, just did not know how to describe things like this.


Right, I have the same opinion. These kind of old articles are not biased. The mass media wasn't controlled by the govs....lol.

It seems that it happened all the time, even discussed!
And also rejected!

well I hope so, I will have to learn spanish now too... I was just getting into sumerian


well i'm not Spanish i'm Portuguese, i will try to have a look, to see if i understand a little much... don't promisse anything...
S&F 2u amigo


Could that be a discussion of Aurora's? Is it possible it was a very active year for them?

posted on Nov, 1 2011 @ 06:54 PM
link
On November 2nd, 1730 there was another atmospheric event, a lightning storm over England. In Maidstone, an eighty foot high, lead-covered church tower burned down after being struck by lightning.

The church stands at the western part of the town, on the bank of the river Medway.

The church is a large handsome building, consisting of a nave, great chancel, and two side isles; the roof is lofty, and is covered throughout with lead. At the west end it has a handsome well built tower, on which there was a spire covered with lead, near eighty feet high, which was burnt down by lightning, on Nov. 2, 1730.


That's a great find, regardless of what it may have been.

With today's tendency to digitize old books and documents held in libraries and archives, the possibilities of finding things like this are bigger every day.

But even if they weren't biased, they had to go through the church censors, that's why all old books had, on the first page, a notice about the license to be published (as we can see at the bottom of the first image).


Old Spanish is not that different from modern Portuguese, we just find some unfamiliar words from time to time, but with Internet access those words are easily explained.

posted on Nov, 1 2011 @ 07:23 PM
link
im at 13 page... it seem's to me that in this letter a famous matematian is asked to help is king to heal him from a health problem, originated by a phenomenan... it seem's also that this matematian that is some of is own health problems rheumatism) haves knowledge to read/set an oracle from the star's...and is king is asking for help in that matter's to ...

( it's a late for me know if i can't get any further answers i ill try tomorrow more of this intersting reading)...


Old Spanish is not that different from modern Portuguese, we just find some unfamiliar words from time to time, but with Internet access those words are easily explained.


well as you say it is in fact very much like our old portuguese writing
im just on to it ...if you try to read you will notice that word's with some kind of ff's are in real ss's or c's...ex.: "y tan eftranas vifiones en el ayre" it means "y tan estranas viciones en el ayre" or in english " and so much strange visions in the sky"..

well this open my appetite

and there (in the suprem region (he is refering to the clestial bodies or star's) or meadle air (i think it menas sky) ) by the way of the union of mater and temperance, it shapes the rare figures tht we seen


You are more than welcome

Originally posted by KingAtlas
excuse my ignorance, but is it in english?

well I hope so, I will have to learn spanish now too... I was just getting into sumerian

No, it's not english. It was written in an old form of spanish, very primitive, with an incompleted spanish alphabet.

I did a modern spanish translation first, in order to translate it with google. Here the modern version I did :


Thank you. In those days, spanish and portuguese language were very similar.

Originally posted by Blaine91555
reply to post by Trueman


Could that be a discussion of Aurora's? Is it possible it was a very active year for them?


Interesting opinion, would you expand it ?


Wow, that must be the same phenomena, a huge event. Thanks.