Michelle’s back, and she’s madder than ever. She was already pretty angry, seemingly unhappy with just about everything. As her husband wrapped up the Democratic nomination in 2008, she let fly her real feelings: “For the first time in my adult lifetime, I’m really proud of my country.” A few months into her job as first lady, her French counterpart asked how she liked the gig: “Don’t ask!” she reportedly spat. “It’s hell. I can’t stand it!”

She apparently has issues.. Below in the link to the full story.


Yes, Republicans hope to regain the White House so they can install Supreme Court justices who will trample Americans’ privacy, ignore the nation’s security, crush free speech and persecute the religious.

Oh, and they’re rich and racist to boot. “Will we be a country where opportunity is limited to just the few at the top? Who are we? Or will we give every child a chance to succeed no matter where they’re from, or what they look like or how much money their parents have. Who are we?”

That’s right, rich people (white, of course) certainly don’t want black people to succeed. They want to squelch success based on what people look like, how much money they have. “Are we going to let them succeed?” the first lady yelled. “Nooo!” the rich white people screamed.

If this is what we call a journalist today. Then they all need to be fired.

posted on Oct, 31 2011 @ 11:45 PM
link
I have other more valid issues with her.. but hey, if I were her Id be less than cheery myself given the current climate. I cant condemn her for her blatant angst on this one. In fact, Id be even more pisssed at my wardrobe consultant and hair stylist if I were her. Someone would be SO fired... maybe assassinated. I mean, this is kinda too Barbie Bush-ish.. not progressive and hip Obama-ish.


Something about her makes my skin crawl. Almost as much as Nancy Pelosi does! I really don't like Michelle Obama, she seems so disingenuous to me. Love the link to the story!

posted on Oct, 31 2011 @ 11:49 PM
link
Shes nuts, you can tell by looking at her, she just has betch written all over her... Please get them out of office im tired of them blaming other people and not taking responsibility for their actions. They had 2 years of control of the senate and couldnt do sh*t and now that the demos lost control in a landslide past election they start blaming again. Then her taking an 8 week vacation... hahahha wow is she serious? Do something good for once besides telling us what to do.get out of here. you are simply retarded michelle... enjoy the white house for one more year cause after that your out of power. great post!

Just another rant of tripe by no first lady just another angry "Lieberal".


This is a hilarious find to me, good going. And I can't say I blame her, even though I don't support the Obama's in general, this has to be a crap position to be in right now as a human being with feelings.

Just this week I was reading about how she (Oh, how embarrassing- Snark!) wore the same dress THREE TIMES in three years. Cause you know, why should save money like the rest of us and I don't know actually wear her clothes more than once?

I said, Good for her wearing the same stuff like a normal person.

posted on Oct, 31 2011 @ 11:55 PM
link
Michelle Obama buys American - she buys her clothes from American designers. That's about all I have to say on that.

Originally posted by neo96
Yeah who are the racist ones here? you know who the Commander and Complainer and Wifey.

Just another rant of tripe by no first lady just another angry "Lieberal".


Jokes aside ( since some take things and themselves waaay to seriously ) Its her classism that grates on me.. its so thinly disguised she must have convinced herself that our citizens are so stupid to be easily fooled. Short memories I guess or maybe many didnt look into her and her husband when they were in Chicago circles.. I live in Il. It was no secret. It is a fact that many of us want AMERICAN success, not success based on color or parents income. Only her kind want the latter. When everyone has the ability to attain the "American Dream" and are self supporting we all benefit.. regardless of Michelle or those of like mind's color and social status fixation. Her kind have destroyed the American Dream over the last several administrations ( D and R.. birds of a feather when it comes to classism) that Ive seen myself.. not including the pieces set in place before I was born as well. Its all thinly veiled BS and hypocrisy. Its a chicken in every pot part deux. Much like all Ive heard out of her. The rest of you eat veggies but hand me BBQ wings. Bah.

The sad thing is that when you point out the hypocrisy, classism or racism.. you are then labeled as a racist when it comes to this president and his wife. This nonsense out of the Obamas isnt unheard of.. all of the first families in my lifetime were like this. Problem is you cant speak any ill of this one or express your displeasure. We even have websites so naysayers can be reported for Gods sake. Sometimes I think I have woken up in some alternate universe when I read of these snitchin websites and this nonsense..

posted on Nov, 1 2011 @ 12:21 AM
link
Michelle Obama = Imelda Marcos...American Style. I;m glad she's angry. She can then relate to how a majority of America is coming to feel toward her. I think I'm in good company by saying we're getting MORE than a little sick of her entitlement attitude as she jet sets off on her little vacations and junket trips to entertain friends in some of the most elite and exclusive locations on Earth. The United States didn't elect her Husband so she could rape America to her own pleasure and entertainment.

Enough is Enough and if we're serious about budget cutting, we can start with about 90% of what now surrounds the First Lady as staff, travel allowances and general perks of a job she doesn't really have and was never asked to take!

I'm no Hillary Clinton fan, but I will grant her the grace and decent shown (at least to the public) in not throwing in our face, frequently, just what a high life it can be for those living in the White House. Michelle Obama is a real example of what is so wrong with our nation right now.

Her man has other issues and cannot give her the attention and acknowledgements she knows she deserves. I have the same problem with my ol' lady. That 'crazy eye' look is the same no matter what the woman looks like!

posted on Nov, 1 2011 @ 09:42 AM
link
Michelle Obama reminds me also of Marie Antionette too. She runs around talking about eating healthy foods then is out eating fatty foods and ice cream. God forbid she has a day where she doesn't show off her 'guns' to the world. Also I live in Illinois and while Obama was Senator here doing well...... nothing, he got Michelle a real cushy gig sitting on some made up board which only existed to give her a title and $100,000+ salary. I believe it was at the University of Chicago I can't totally recall. Anyhow an investigation showed the position she held never existed before she got it and when she became first lady the position was never filled by another.
As someone pointed out earlier it happens all the time with the politicians. What makes me so angry is this guy, Obama, proved himself to be a lackluster politician with wonderful oratory skills while serving here in Illinois. He did nothing except hold a seat so he could get his wifey a decent salary and prepeare himself for a presidential election. His wife also was a lawyer but 'lost' her BAR license. Look it up.
Off with her head I say!


Speaking of her and her french counterpart this is one of my favorite pictures.

Scroll down a few pages for the pics.
Gotta love hypocrisy.


I wish all women had those hot figures like those french ladies. I wish all men had the body of a someone like Brad Pitt or Tom Cruise...


But they don't, see it takes all kinds. She is not morbidly obese, if she wants a McRib for lunch more power to her.

posted on Nov, 1 2011 @ 11:31 AM
link
Well I am not one sided on this issue and wanted to get that out of the way going in. I am not political in my beliefs or motivated by anything other than speaking my mind and my heart. I knnow that the office they hold is a stressful demanding job and it's no wonder that they go grey quickly. In this case, and in all honesty,, in all honesty, they took the job and it was in a mess when they showed up. True they did ask for the job and asked for it rigorously. I just think it was more than could be imagined. I wonder if she is angry because she and Barack may already know that the cards they have are doomed to fail. In this day and age I just feel The President is told what He is gonna have to do, rather than what he says he wants done.

Right. Do as I say, not as I do, fine way to lead by example. "It doesn't matter if me and my husband suck down hot dogs, ribs and wings like a drunken frat-house, you should eat fruit."

posted on Nov, 1 2011 @ 11:36 AM
link
I wonder how Queen Michelle is going to survive when she doesn't have all the tax payers money at her deposal when King Barry gets voted out of office come next year?

Originally posted by KnightFire
I wonder how Queen Michelle is going to survive when she doesn't have all the tax payers money at her deposal when King Barry gets voted out of office come next year?

One perk of being president is that you make millions and millions and millions of dollars. The last I heard was about 2 years ago and Obama had already increased his net worth by $14M. She will be able to buy just about anything when they leave the White House. They may not be "own your own island" rich, but they will be richer than most of us will aspire to, let alone attain. 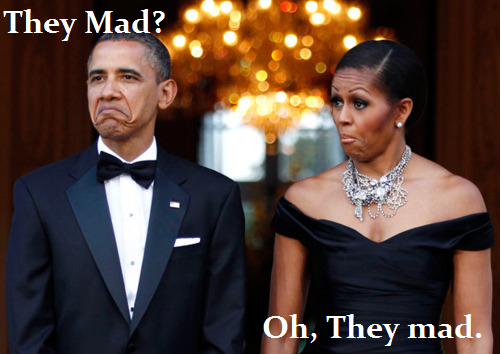