Ezra Levant from the Toronto SUN

Levant Sounds like he could be on FOX News seeing he a Conservative or is The SUN like Fox News ?

its Obviously that he has Hatred towards the Mohawk People as He is Bashing Slandering The Mohawk Warriors and throws up about the OKA Crisis as saying it was Bad for The Mohawks to Reclaim a Burial Ground AKA Cemetery From Turning into a Golf Course !
I Guess he doesn't realize that the Reservation is right next to that Golf Course

Ezra Levant On The Warpath Against Occupy Toronto Mohawks

Ohh are those 8x10 pictures of himself to sign to give out to people for autographs? at the 3.07 mark ?
at a Protest Site ?

Now listen to what he say about Oakland California of what Happened to Former Marine Scott Olsen
basically he is saying the the Occupy of Oakland instigated the Cause of Scott Olsen Injury !! To Spark a Violent Encounter ! in Hope the Police will retaliate so they the Occupiers can have sympathy !! >WHAT ??? at the 3:39 Mark

The Mohawk Bashing begins at 4:48 Mark :

Grand River land dispute at 7:10 mark
Levant never Mention that the Land dispute has been going on since the late 1700s

But Levant NEVER Mentions!! about ! !!! Unarmed Protester Dudley George! as The OPP Killed Him Unarmed!! in the Ipperwash Crisis ,,, Levant kinda left that Out!!

He then Goes about the Mohawk Warriors acting like Boarder patrol with check points and ID's
as if was going to Happen in Toronto as it did in OKA and Caledonia Well those 2 places had Land disputes
ages ago and was Near around the Reservations ! lets make that perfectly Clear ...

This Guy Levant is Worried about Mohawks putting barricades up! around the Park Toronto ! WTF!
and Bringing Machine Guns in ! ?

I doubt it would Happen unless The Warrior Society was threatened with Weapons of the Toronto Police bringing in..Lethal Weapons to the Occupied Park !

Well I know for a Fact that a Militia Group in the USA did just that ! and was posted right here on ATS


Levant has a Fear of the Mohawks causing a Stir as He knows that this Warrior Society (Reservation Guards)
does not back Down ..

Yes Ezra Levant We are Criminals for taking back reclaiming and defending Burial Land from being Turned in to a Dammed Golf Course!! in OKA Canada Quebec

I guess there against him too he didn't mention that tho
in the Above Video!

posted on Oct, 31 2011 @ 11:37 AM
link
I bet you could walk around all day interviewing people asking them what they want and you wouldn't find a single person who doesn't want anything, so much for protesting greed.


Ezra Levant sounds like the canadian version of Fox news.

will the Mohawks be selling cheap cigarettes?
that would be one way to get a big crowd to the park.
Canadians love their cheap cigarettes, enough to forget their other prejudices.

Originally posted by citizen6511
reply to post by Wolfenz


Ezra Levant sounds like the canadian version of Fox news.

will the Mohawks be selling cheap cigarettes?
that would be one way to get a big crowd to the park.
Canadians love their cheap cigarettes, enough to forget their other prejudices.

That wold Sure bring in a Crowd!

posted on Nov, 2 2011 @ 08:05 AM
link
Just in case you did not Watch the First Video of this Thread well! Here is a Text Version of what
Ezra Levant has Said in the Video Below

Arrival of Mohawks takes Occupy up a notch

Here are My Highlights of Issues I have with the Ezra Levant! from what he Said


So what’s next? In the United States, Occupy protests have decided to stay relevant by turning violent. Oakland, Calif., saw outright riots. It’s not accidental: This is the next stage of the protests, to spark a violent encounter with police in the hopes that the police response will gain them public sympathy and give them the political credibility that their whiny incoherence hasn’t provided so far.

What can you Believe this! this is what Fox News Glen Beck would of Said !

To cause a Riot for Sympathy! Does he really think people will Buy into that! ?
Scott Olson Intention !? Yeah Right Levant !


They call themselves Mohawk Warriors. And they don’t believe that the laws of Canada apply to them.

Only Within their Jurisdiction! around the Reservation
and when White Men Try to Claim Burial Indian Grounds! to Use for an Entertainment Site ,, Ezra !


Being exempt from Canadian laws has become a specialty of the Mohawk Warriors. These were the folks who had a two-month armed standoff with police and the Canadian army in Oka, Que., that led to the murder of Quebec police corporal Marcel Lemay and the injury of 10 RCMP officers. The Canadian Forces had to be called in.

Yeah 2 Months Stand Off by a Few Warrior Against the French Canadian ARMY !! and a Casualty Happened but what was the Big Story! You wont tell that to the Public ! Corporal Lamay was still alive died of cardact arrest on the way to the hospital he did not died instantly

NOW Listen!! Too what the Anchorman Says! in the Video

He said this ::
No one is prepared for what happens next. Quebec police in riot gear storm the barricades. There are clouds of tear gas and a hail of bullets. After 15 minutes of mayhem, the police retreat as quickly as they attack. The strike claims the life of 31-year-old police officer Marcel Lemay. In the confusion and chaos, each side claims the other side shot first.

Ezra tell the Whole Truth !!! Police Stormed through the Barricades and thew Tear Gas and a Hail of Bullets!


As EZRA LEVANT would (( NOT )) Mention about the Ipperwash Crisis about a UNARMED Mohawk Murdered by the OPP in the Conflict!

The Guys!! Name Dudley George a Pic of Him Below 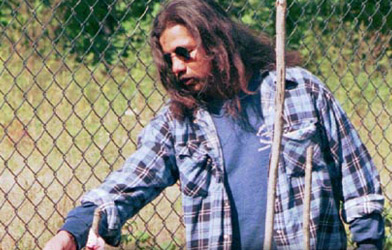 Dudley George, shown in this 1993 photo, was shot and killed when police fired on natives occupying Ipperwash park. The photo shows George at what is claimed to be the sacred Indian burial ground that caused the standoff. (CP Photo) 1996 (Port Huron Times Herald/Tony Pitts)

as you see Police was Fired on Natives not just Dudley George !

Ezra Did tell the That little Part to the Public did He!!


The Mohawk Warriors conducted another military mission in the Ontario community of Caledonia in 2006, when they occupied a residential development site — again, setting up barricades, harassing and threatening citizens.


Military Mission yeah it Call the Reservations Own First National Guard!! AKA USA call it a Militia

its all here .. since the late 1700s
Caledonia_Land_Dispute
en.wikipedia.org...

The rest of what he say it just Pure Nonsense it not even Worth Mentioning as he doesn't have a Clue.
NO Clue about OKA and Caledonia Crisis of when ON There ! I Bet if his Family's cemetery in Russia was made into a Golf Course he would be right over There ! Protesting and Reporting !

Originally posted by Wolfenz
I somewhat had the feeling this was going to Happen
Ezra Levant from the Toronto SUN
Levant Sounds like he could be on FOX News seeing he a Conservative or is The SUN like Fox News ?


The Sun caters to a particular group of people who want their right-wing opinions fed to them pre-chewed and fully digested. It is not aimed at thinkers...simply reactors. And those readers respond in a fairly predictable way.

The Mohawks know there's a lot of wiggle room between sitting there and taking it from 'the man', and creating an armed stand-off like Oka. As such, the Sun can try to make this all about the bad Indians, but I guarantee it will bite them in the collective corporate arse.

Ezra Levant, Michael Coren, and Salim Mansur are disseminators and mind control megaphones. They Levant and Coren are just as radical as someone with tnt strapped to there chest.


At the end of the 78-day standoff, when the mayor of Oka cancelled the expansion of the golf course, the Mohawks agreed to retreat. In charge of the younger children, Horn-Miller led the exit, holding her 4-year-old sister. She directed the group to walk close to the media barricade for safety. While leaving, chaos erupted, and a Canadian soldier struck Horn-Miller across her chest with his bayonet, knocking her to the ground. “I gave my little sister to my mother and saw I was covered in blood,” Horn-Miller said. “That’s when I realized I had been stabbed.” The weapon struck her sternum just inches above her heart. “The doctor said I was very lucky to be alive,” Horn-Miller said. “I was grown up instantly after that happened. I understood how easy it is to die.”